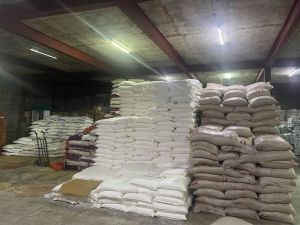 SUGAR RUSH A huge volume of sugar was found in a warehouse in Pampanga. Photo courtesy of Bureau of Customs

(UPDATE) THE government has launched a crackdown on sugar hoarders and smugglers, as it sealed three warehouses and recovered thousands of sacks of sugar suspected to have been imported illegally.

The raids were conducted on Wednesday and Thursday in San Fernando, Pampanga, and San Jose del Monte, Bulacan on orders of President Ferdinand “Bongbong” Marcos Jr. as the price of refined sugar in markets continued to climb.

Press Secretary Rose Beatrix “Trixie” Cruz-Angeles said on Thursday the President, through Executive Secretary Victor Rodriguez, ordered the Bureau of Customs (BoC) “to exercise its visitorial powers to all customs bonded warehouse and to check on the inventory of imported agricultural products with the aim of finding out if there is hoarding of sugar.”

“This is a series of raids…. We can confirm that there is another one today and possibly more in the coming days,” she said in a press briefing.

The two raided warehouses in San Jose del Monte were owned by a Chinese-Filipino sugar trader.

A team from the Customs Intelligence and Investigation Service (CIIS) headed by Officer in Charge Joeffrey Tacio and the Customs Enforcement and Security Service found between 25,000 and 30,000 sacks of different varieties of sugar in the warehouse owned by Victor Chua, who insisted that sacks were “locally purchased.”

Tacio said Chua was given 15 days to present the necessary documents and explain why the sugar in his warehouse should not be confiscated.

A second warehouse owned by Chua was also visited by Customs and the Department of Agriculture (DA) agents Thursday afternoon.

The warehouse stored an estimated 42,733 sacks of sugar worth P215 million, according to a Customs estimate.

Thousands of sacks of sugar suspected to have been smuggled from Thailand were found inside the Lison Building in Barangay Del Pilar, San Fernando City.

“The BoC's Pampanga sugar warehouse raid may very well serve as a warning to unscrupulous traders who are currently hoarding their stocks of sugar in order to profit from the current artificial sugar shortage situation,” Rodriguez said.

Earlier, Rodriguez told The Manila Times columnist Rigoberto Tiglao that his office was investigating reports that certain traders were “aggressively” pushing for the importation of 300,000 metric tons of sugar to use it as a “cover” to release sugar they have hoarded.

Rodriguez said a massive importation of sugar could result in a windfall of at least P300 million for the traders.

Cruz-Angeles said representatives from the Department of Trade and Industry and the Sugar Regulatory Administration (SRA) inspected the Pampanga warehouse to check if the sugar was hoarded.

Hoarding, profiteering, and price manipulation are punishable offenses during a national emergency under Republic Act (RA) 11469 or the “Bayanihan to Heal As One Act.”

Agriculture Undersecretary Kristine Evangelista has said the DA is considering a suggested retail price (SRP) of P90 per kilo for sugar.

On Wednesday, Marcos said the government was negotiating with the country's sugar traders to lower the retail price to P70 per kilo.

If the remaining supply will not be enough, the President said “we will be forced to make an importation.”

Last week, Malacañang described as “illegal” the SRA's Sugar Order (SO) 4 to import 300,000 MT of sugar following its rejection by the President.

Order 4 was signed by resigned Agriculture undersecretary Leocadio Sebastian on behalf of Marcos who is concurrently agriculture secretary and SRA board chair.

SRA administrator Hermenegildo Serafica — one of the four signatories of Order 4, has also resigned.

On Thursday, Cruz-Angeles confirmed that Marcos had approved the importation of 150,000 MT of sugar.

The President gave the go-ahead during his meeting with Senate President Juan Miguel Zubiri and sugar industry stakeholders, including manufacturers who use premium sugar for their products such as carbonated drinks, on Wednesday.

No timeframe has been issued for the importation, Cruz-Angeles said.

Zubiri, who led a delegation of stakeholders from the farmers, millers, sugar workers and refiners, said they “had a very productive two-hour meeting with the President.”

“First of all, we thanked the President for not allowing too much importation of sugar to the country that would have affected hundreds of thousands of local farmers and farm workers all over the country,” he said.

Zubiri added that there were other initiatives that were recommended to the President to ease the surge in sugar prices, but they will let the President make the announcement at the proper time.

Zubiri said they welcomed the resignation of the SRA administrator and all the other signatories of Order 4.

He earlier urged the Senate blue ribbon committee to investigate the issuance of the “illegal sugar order.”

“This recent fiasco has put a spotlight not only on the SRA's blatant disregard for the local sugar industry, but also on its bald-faced attempts to usurp authority,” Zubiri said in his privilege speech.