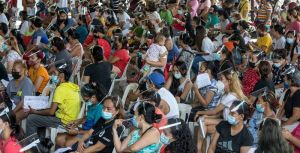 Residents of Barangay Pasong Tamo in Quezon City are herded at a covered court during the Department of Social Welfare and Development 4Ps’ — Pantawid Pamilyang Pilipino Program — verification of application for conditional cash grants to indigents on June 18, 2021. This is part of the government’s program to help the poorer population improve the health, nutrition and education of their children aged 0 to 18. The crowd, however, seemed to have forgotten about the pandemic as they failed to observe the health protocol on physical distancing to avoid Covid-19 infection. FILE PHOTO BY RUY L. MARTINEZ

NEWS about the Pantawid Pamilyang Pilipino Program (4Ps) has, since the program began in 2008, typically focused on its flaws or more controversial aspects. The most recent stories involving the 4Ps involved Social Welfare Secretary Erwin Tulfo's feisty vow to remove more than a million people from the Department of Social Welfare and Development's rolls, and a controversy over whether or not 4Ps beneficiaries were entitled to the DSWD's educational subsidy program.

The reality, however, is that the 4Ps has been remarkably successful in doing exactly what it was intended to do, helping thousands of the country's poorest families to achieve some stability and pull themselves up the economic ladder. Even if the country does not always hear about the good news, it has caught the attention of the outside world.

A recent report by the UN bureau of Inter-Press Service (IPS) detailed the progress of the DSWD's “graduation” program for 4Ps families — programs intended to help them move away from government assistance and develop self-sustaining livelihoods. The program is called the Padayon SLP (sustainable livelihood program), and is managed by the DSWD with support from the Asian Development Bank (ADB), the Bangladesh Rehabilitation Assistance Commission-Ultra-Poor Graduation Initiative (BRAC-UPGI), and the Australian Department of Foreign Affairs and Trade (DFAT).

The program started as a pilot project under the Department of Labor and Employment (DoLE) among 1,800 poor families in Negros Oriental. The expanded program is now supervised by the DSWD, and targets about 2,700 beneficiaries in Iloilo, Bukidnon and Sultan Kudarat, some of the country's poorest provinces.

Under the program, beneficiaries are offered “productive assets and technical training,” including, among other things, coaching by Graduation Community Facilitators on managing finances and savings, skills building on social and health issues, and connections to community groups and cooperatives. Most of the participants of the program started small businesses, such as raising chickens or pigs, food cart businesses, or sari-sari stores.

An initial impact assessment of the pilot program by the ADB showed remarkable results in spite of the severe challenges posed by Covid-19 and the lockdowns. ADB reported that 73 percent of group livelihoods and 60 percent of individual livelihoods remained fully operational by the end of the program. Likewise, despite some reductions in savings and increases in new loans taken by participants due to Covid-19, by September 2020 69 percent of those who reported incurring a debt also reported being able to repay all or part of their loans, which ADB concluded “indicated improved savings management and a significant decrease in instances of risky financial behavior.”

Having demonstrated its success, the program should now be expanded nationwide, something that the DSWD expressed a wish to do in the recent news report. However, it is not clear that this worthwhile aspiration is being taken seriously; neither the DSWD's proposed budget for 2023 nor the antagonism for the 4Ps program publicly expressed so far by the department's current chief are positive indicators.

Expanding the program, even if it requires additional funding, would be a worthwhile public investment, and would significantly recover the gains in poverty reduction that were lost due to the Covid-19 pandemic. In any event, funding would likely be the least of the government's problems, as the program's initial success would certainly make it an attractive candidate for further support from development partners.

An expanded program could also provide participants with a broader list of livelihood options beyond the typical micro-scale entrepreneurship model, successful as that has been. For example, apprenticeship or other compensated skills training programs in construction work could offer opportunities for employment in the country's many infrastructure projects. These would be particularly valuable in the local areas where many 4Ps recipients live, as these often lack basic infrastructure such as roads and water systems, and the needed labor to build them.

We certainly hope that the DSWD as well as the lawmakers holding the government's purse strings would be inspired by the positive attention the results of the Padayon SLP have attracted, and invest the effort and resource1s needed to take this laudable program to the next level.