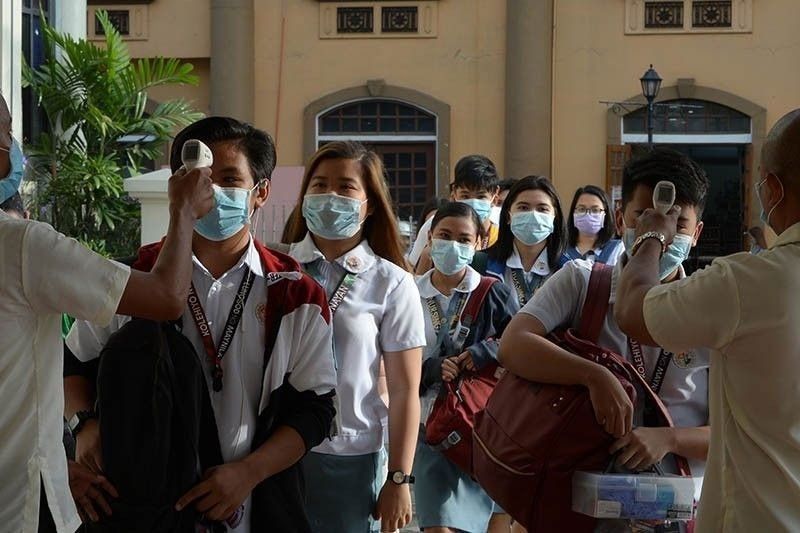 Students wearing protective face masks have their temperatures taken while entering their college campus in Manila on January 31, 2020

MANILA, Philippines — Government must ensure that students won't regress or drop out of school in 2021, a lawmaker said, as the possibility of holding in-person learning hangs in the balance amid the threat of a variant of the coronavirus.

The Duterte Cabinet initially approved the education department's proposal for a pilot run for face to face classes in January as the administration conceded that the distance learning setup, marred by difficulties, is far from ideal.

But over the weekend, President Rodrigo Duterte took back the move as concerns mount over a new strain of the deadly virus which experts have said could be more contagious.

Challenges in the new learning method, such as access to stable internet connection and gadget availability to name a few, is therefore feared to continue with the recent pronouncement.

Sen. Sherwin Gatchalian, chair of the Senate's education panel, said 2021 would be a "very challenging year" sans the physical classes, which he and other members of the chamber previously backed.

"Government has to use every arsenal it has to make sure that our learners will not regress, or worse, drop out of school completely," he said in a statement. "We have equipped DepEd with COVID-mitigating items in the 2021 budget. They should implement those items as soon as possible."

The education sector got a P708 billion for next year in the ratified version of the 2021 budget, a regular that has since been followed that it gets the biggest share in funding annually.

Of the figure, DepEd is set to receive P606.5 billion, while other education-related agencies such as the Commission on Higher Education and others will get the remaining.

Before the supposed dry run was postponed, DepEd said it was eyeing more than a thousand schools in areas with low coronavirus transmission as sites for the study.

With the president's new order, however, it remains unclear what the department's next move is as the second quarter of the ongoing school year begins in January.

Distance learning is largely carried out through television, radio and the internet, but DepEd has rolled out printed modules for those without the said means. The learning resources, however, had been hounded by errors, as officials admit that they, too, are still transitioning to the new setup, and that its printing had been costly.

Some 25 million Filipino students opted to enroll this year, with private school enrollment of 4.3 million in 2019 cut in half to 2.1 million in 2020 as many transfer to public institutions.

Enrollment is also short by two million who chose to skip schooling during a pandemic.

The Alliance of Concerned Teachers over the weekend said "mere restrictions will not suffice" in addressing a health crisis. The group said the administration should fight the pandemic with better preventive measures as well as allocate enough of its resources for more accessible education.

“[The] Cabinet meeting exposed how ‘in-the-dark’ and ‘in-limbo’ the Duterte administration still is in terms of handling the pandemic," said Raymond Basilio, ACT secretary general, "hence its knee-jerk responses of holding back the conduct of face-to-face classes as opposed to employing a scientifically guided risk assessment of where and when physical classes can be held in light of the discovery of new strains."

Several countries have confirmed cases of the new COVID-19 variant, which was first detected in the United Kingdom.

At home, flights from the British nation had been suspended, but officials have yet to impose a travel ban on countries with cases of the new variant, as Health Secretary Francisco Duque III said community transmission in the country of origin should first be detected.

The move had since been criticized as fears grow that cases of the new strain could soon enter the country and force it into another hard lockdown imposed from March to June, bringing the economy in shambles and entering a recession for the first time in three decades.

In the early months of 2020, officials including no less than the Duque and the president were also hesitant to restrict entry of tourists from China, where the COVID-19 had originated.

Coronavirus infections in the Philippines are now at over 470,000, just a few days before the year ends, with over 9,100 deaths. It remains as the second highest in Southeast Asia, next only to Indonesia's 713,000 cases and 21,000 fatalities.