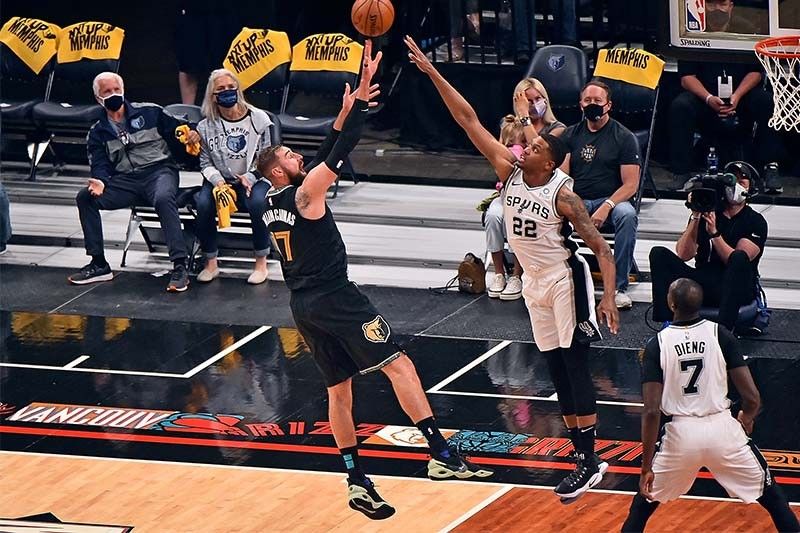 MANILA, Philippines — The Memphis Grizzlies kept their season alive after fending off the San Antonio Spurs, 100-96, in the inaugural play-in tournament at the FedEx Forum in Memphis on Wednesday (Thursday, Manila time).

After squandering a 21-point lead early, the Grizzlies were able to convert on clutch baskets in the fourth salvo to deny the Spurs a playoff berth for the second year in a row.

The Spurs were within two with 4:02 ticks left in the game after DeMar Derozan sank two charities, 87-89.

But a Kyle Anderson triple and a Jonas Valanciunas putback in quick succession gave the Grizzlies breathing room anew, 94-87.

While the Spurs kept themselves within striking distance until the final minute of the game, the Grizzlies were able to make defensive stops and come away with the win.

Valanciunas finished with a monster double-double of 23 points and 23 rebounds to lead Memphis to the victory.

Dillon Brooks, for his part, topscored with 24 markers. Ja Morant had 20 as well.

Meanwhile, DeMar Derozan had 20 points in a rough shooting night where he shot just five out of 21 field goal attempts.

The Grizzlies will thus take on the loser between the Golden State Warriors and the Los Angeles Lakers later today for the last playoff spot in the West.