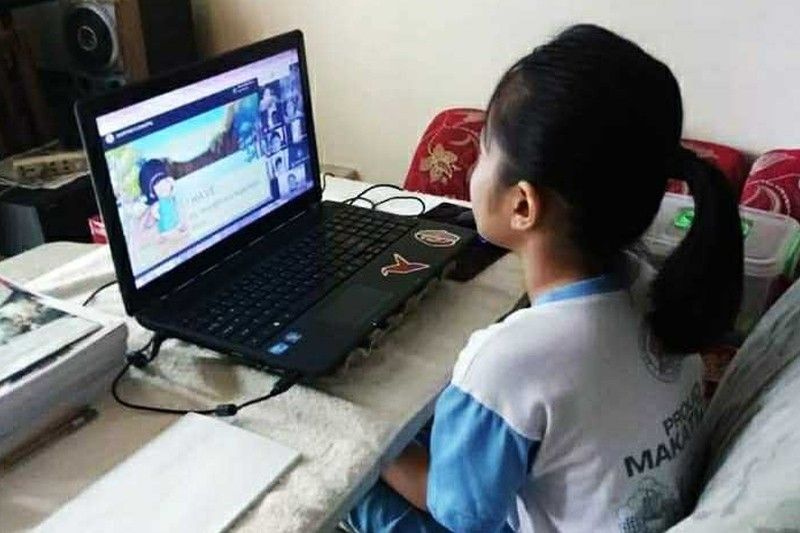 A Filipino student is seen attending her online class in this undated file photo. Distance learning in the country began in October, DepEd’s answer to continuing learning amid the pandemic that has since been hounded by difficulties

MANILA, Philippines — A non-government organization on Tuesday sought for solutions to what they said has become a "learning crisis" in the country following students' dismal showing in recent international assessments.

Filipino learners had ranked the least out of students in 58 countries in both Mathematics and Science per a study, which was released in 2020.

Prior to this, findings by the Programme for International Student Asessment in 2019 also showed students in the country at the bottom in reading comprehension among 79 nations.

The Philippine Business for Education in a statement these results would stand to "worsen the learning losses" in the country along with challenges within the sector as a result of the coronavirus pandemic.

"If the success of a society is measured by how well it invests in its children, then the Philippines is failing," the group said. "We are now at the eleventh hour and we are sounding the alarm."

Some 25 million Filipino students opted to enroll this year under the distance learning setup by the education department, an enrollment figure that saw two million students skipping school from the 27 million recorded in 2019.

Difficulties have continued to hound the online classes which groups had earlier called on the postpone, ranging from students left without gadgets or access to internet to errors in printed materials for those without the means.

PBEd added that to date, there seems to be no "clear plan" on how students could return to schools, after the Duterte administration nixed its own approval of a pilot study for resuming in-person learning.

The education department in its report to the Cabinet had outlined steps to prevent the transmission of the deadly virus in schools, such as reducing class sizes to between 15 to 20 and following staggered schedules.

Schools would also be tasked to disinfect on a regular basis, apart from clinics being upgraded for better health service to students, teachers and staff.

The group said Congress should pass a joint resolution in the Senate that would convene an education commission to "draw up urgent, decisive, and targeted reforms in our education system."

They added: "Government must take the lead in building an education system that Filipino learners deserve — one that realizes their full potential."

The second quarter of the ongoing school year began on Monday, January 4, but it remains unclear as to the fate of allowing face-to-face classes despite the administration conceding that the said setup is far from ideal.

DepEd has since said that it will carry out reforms to improve learning in the country and for students to fare better in global education studies.