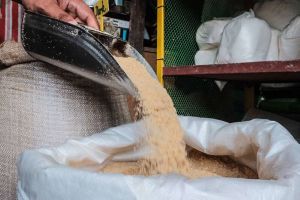 UNITED Sugar Producers Federation President Manuel Lamata on Wednesday urged the Department of Trade and Industry (DTI) to tap members of the National Bureau of Investigation in the inspection of warehouses of sugar amid reports of hoarding of the sweetener.

“If inspection is conducted, I am very sure a large volume of sugar will be discovered,” Lamata said in a radio interview.

Lamata said that the DTI has the authority to visit warehouses to prevent hoarding in the sugar supply.

“The DTI has the license to open warehouses, no trader can claim private property as that is the mandate of the DTI,” he added.

Lamata maintained that there is no shortage of sugar and called the spike in the prices of refined sugar “unnecessary.”

“If you can see, we have stocks of sugar in the local market but it is too expensive. Consumers can buy sugar as much as they want, but the issue is the high retail price. It is too much,” he said.

Based on the daily market monitoring of the Department of Agriculture, the retail price for refined sugar is still P100 per kilo.

“We are calling on President Ferdinand Marcos to order the inspection of all sugar mills, particularly in Bukidnon. There are stocks in the warehouses. There should be an inventory. Traders buy sugar from us at P45 per kilo of sugar, but they are selling it from P100 to P110 per kilo,” he noted.

Lamata said the government can also tap the 126,000 metric tons (MT) of sugar still in the possession of the Bureau of Customs.

“At least 126,000 metric tons of sugar are still in the container vans. I am recommending to the President to allow the use of these stocks,” he said.

Lamata said that consumers can expect more sugar supply by mid-September with the ongoing harvest of sugarcane and the milling of local sugar producers.

Meanwhile, Philippine Chamber of Agriculture and Food Inc. President Danilo Fausto contradicted the claim of soft drinks manufacturers that there is a shortage in the sugar supply.

“At least 74 percent of this or 126,000 metric tons are committed to the industrial users, the soft drinks manufacturers. I am surprised that there is an alleged shortage,” Fausto said, reacting to the joint statement of Coca-Cola, Pepsi Cola and RC Cola on the alleged shortage of refined sugar.

President Ferdinand “Bongbong” Marcos Jr. said he will let Congress investigate the SRA's supposed approval of the importation of 300,000 MT of sugar, which he nullified.

SO 4, described by Malacañang as “illegal,” was signed by Agriculture Undersecretary Leocadio Sebastian in lieu of Marcos who is concurrently agriculture secretary and SRA board chairman.

The order was also signed by SRA Administrator Hermenegildo Serafica as SRA board vice chairman, sugar millers' representative Roland Beltran and planters' representative Aurelio Valderrama Jr., whom the Chief Executive appointed only days before SO 4 was released on August 8.

Sebastian, Serafica and Beltran have quit their posts because of the controversy.

Marcos said that his concern was the whittling down of workers in soda companies that claimed to have been hit by the sugar shortage.

“They are starting to cut down the days of the week na nagtatrabaho and we are very worried of course about jobs,” the President said.