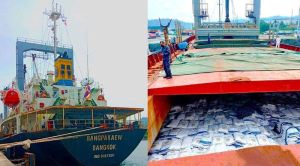 GOTCHA The Bureau of Customs (BoC) detains the M/V Bangpakaew on Thursday, Aug. 18, 2022 following a tip that it contained sugar contraband. The ship, which arrived from Thailand, was suspected of carrying approximately 140,000 bags or 7,000MT of sugar. PHOTO FROM BOC FB PAGE.

“HEADS will roll” at the Bureau of Customs (BoC) in the aftermath of the foiled smuggling of 7,021 metric tons (MT) of sugar at the Subic Port in Zambales, Malacañang vowed Friday.

Cruz-Angeles said that heads will roll if it is proven that Customs port personnel connived with smugglers in using the questionable import permits.

She also revealed in a statement that at least one of the warehouses that were raided by Customs agents was not registered with the Sugar Regulatory Administration (SRA).

“Suspicions were raised when the owner claimed that the stockpile was the result of slow sales. 'Matumal' daw (sales were slack),” Cruz-Angeles said.

The controversial Sugar Order 4 was believed to be the document used to authorize the shipment from Thailand. “If this is true, the swift issuance of Sugar Order No. 4 all the more became suspicious,” she said.

Malacañang has described as “illegal” the order issued by SRA board to import 300,000MT of sugar following its rejection by President Ferdinand “Bongbong” Marcos Jr.

Order 4 was signed by Agriculture Undersecretary Leocadio Sebastian in behalf of Marcos who is concurrent agriculture secretary and SRA board chair.

Sebastian has since resigned.

Cruz-Angeles said Customs reported the smuggling try to Executive Secretary Victor Rodriguez, who had directed the bureau to inspect warehouses where stocks of sugar are believed to have been hoarded.

Customs personnel at the Subic Port detained the 19 crew members of the ship Bangpakaew, which brought in the equivalent of 140,000 bags of sugar valued at P45,623,007.51.

The BoC said the shipment was consigned to Oro-Agritrade Inc. under the account of ARC Refreshments Corp., and noted as Entry C-12513 and C-12521.

The Thai exporter is listed as Ruamkamlarp Export Co. Ltd., while the local customs broker was identified as Malou Leynes Buerano.

Customs Intelligence and Investigation Service Officer in Charge Joeffrey Tacio said the cargo was covered by a “Special Permit to Discharge (SPD) and Verified Single Administrative Document (SAD)” from BoC and with a verified clearance from the SRA through a certain Rondell Manjarres.

The ship was allowed to unload its cargo Thursday “because it was not covered by the failed attempt to import 300,000MT of sugar. This means that the recycled permit was from an old allocation,” Tacio said.

The office identified the individuals behind smuggling operations in Subic Port as “Buboy” and “Reggie,” who both use “Kysse Lish” and “Foxxie” as consignees.

Rodriguez also directed Customs to check if the sugar seized in two warehouses in San Jose del Monte, Bulacan, was actually imported but was repacked into sacks with local brands.

Another warehouse in Pampanga and two more warehouses in Bulacan have been raided by Customs agents.

Some of the inspections turned up questionable documents, she said.

Cruz-Angeles said the inspections were being carried out so the government can determine if there is an artificial shortage of sugar.

In a separate announcement on Friday, Malacañang announced that the owners of big supermarket chains have committed to sell cheaper sugar to consumers.

The Office of the Press Secretary said Rodriguez met with the owners of Robinsons Supermarket, SM Supermarket, Puregold Supermarket and S&R Membership Shopping.

The supermarket chain owners agreed to sell sugar at the suggested retail price or SRP of P70 per kilo from a high of P110 per kilo.

“The President lauded the selfless response from these businessmen who are sacrificing not just their own inventory, but also their projected business profits for the sake of the ordinary Filipinos at this time when the country is besieged by many problems,” Rodriguez said.

“Puregold likewise committed to make available 2 million kilos of refined sugar at P70 per kilo. This will give ordinary Filipinos access to cheaper sugar with more than 3 million kilos available in the market next week,” said Rodriguez.

The price drop is expected to be carried out next week.

“This is to avert a possible temporary halt in their operations that could result to the displacement of their workers,” he said.

“Victoria's milling also allotted 500,000 kilos of sugar for consignment in Kadiwa stores in the populated parts of the Visayas,” he added.

The President earlier met with members of the Philippine Chamber of Food Manufacturers, Inc. (PCFMI) to discuss ways to head off a sugar shortage.

The PCFMI is the principal organization of manufacturers and distributors of food products in the Philippines.

One option discussed was the direct importation of sugar by food manufacturers.

“This is just the tip of the iceberg. The government should conduct an inventory of all the sugar mills,” Lamata said.

He said sugar millers were also acting as traders.

“I am happy that I am right all along in asking President Marcos to open the warehouses…and I am sure more sugar traders are hoarding their sugar stocks,” he said.

Lamata suggested that the sugar seized in the raids be distributed for free in the country's markets to bring down its retail price to the P75 to P85 per-kilo range.

He said his group does not oppose the government's plan to import at least 150,000MT of sugar.

“It's not a bad idea to import 150,000 metric tons of sugar if it is refined sugar and not raw or brown sugar as the milling has already started. The sugar imports will arrive in October, November and that will not affect the ongoing harvest season,” he said.