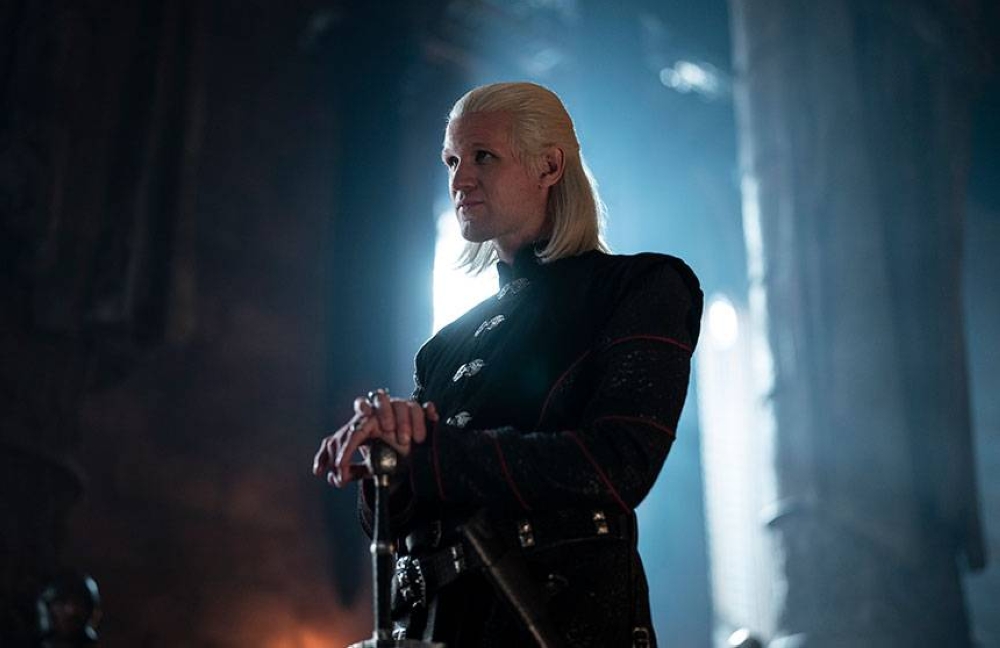 From 11th Doctor (‘Doctor Who’) to young Philip Mountbatten (‘The Crown’) to Targaryen Dynasty prince. Matt Smith is Daemon Targaryen in HBO’s ‘House of the Dragon.’

HBO's latest entry into the battle for our eyeballs and hopefully our subscription pesos is the “Game of Thrones” prequel, “House of the Dragon.” Reportedly, the budget for each episode is $20 million, which puts the whole season at $200 million or roughly P11 billion. For perspective, the total budget for Dragon is equivalent to Marvel's 2021 Christmas release, “Spider-Man: No Way Home.”

There's a lot of promotion for this show. Locally, there are give-aways, expensive digital billboards, a big display at the Mall of Asia and a major event for press and fans. Said event included the reveal of the skull of Balerion, the Black Dread, the most enormous dragon in Westeros history — complete with light and smoke, music and baskets and vessels of onions on the tables. I mention the onions because we all know they go for a pretty penny nowadays.

House of the Dragon is the first of what HBO hopes will be successful spin-offs after the landmark Game of Thrones series, which first aired in 2011. Other shows in development under the GOT banner are: “The Sea Snake,” “Ten Thousand Ships” (about Princess Nymeria), an untitled Jon Snow sequel series, “The Tales of Dunk and Egg” series, a Flea Bottom series, and an animated series.

The action in House of the Dragon takes place 172 years before the birth of Daenerys Targaryen. The first episode shows how the current sitting Targaryen, Viserys (played by Paddy Considine), inherits the throne, and the question of his succession occupies the plot of the season, which is lifted from George R. R. Martin's “A Song of Fire and Ice.”

Speaking of the word succession, one writer actually describes this show as '”Succession” with dragons, and I think it's pretty spot on.

Among the key characters, we meet in the first episode is King Viserys' daughter, Rhaenyra Targaryen. Since fans know Rhaenyra was played initially by Milly Alcock and later by Emma D'Arcy, you'll understand why the series sometimes jumps halfway through.

Another main character is Alicent Hightower, played first by Emily Carey and later by Olivia Cooke. Viserys' brother, Daemon Targaryen, is played by former “Doctor Who” lead Matt Smith — a name all geeks will recognize. Otto Hightower, the Hand of the King, is played by Rhys Ifans.

After viewing the first episode, I felt the same way I did after watching an installment of “The Hobbit” or “Fantastic Beasts” movies. Both were prequels to the hugely successful fantasy adaptation franchises. They looked expensive, but they didn't have the magic of the material they spun off from, nor did they have characters I rooted for or relished from first sight. It just seems like this to me when so much entertainment is now headed to spin-offs and properties based on big franchises and IPs.

Most of the people in the screening audience applauded. I was left wondering if they saw or, better yet, felt something I didn't. For me, no one can come close to Tyrion and his wit, nor anyone like Peter Dinklage to bring such a standout character to life.

How much of a success will this show be? We'll find out soon enough. In the meantime, watch “House of the Dragon” on cable's HBO or via HBO subscription if you live in Asia. New episodes are out every Monday morning.