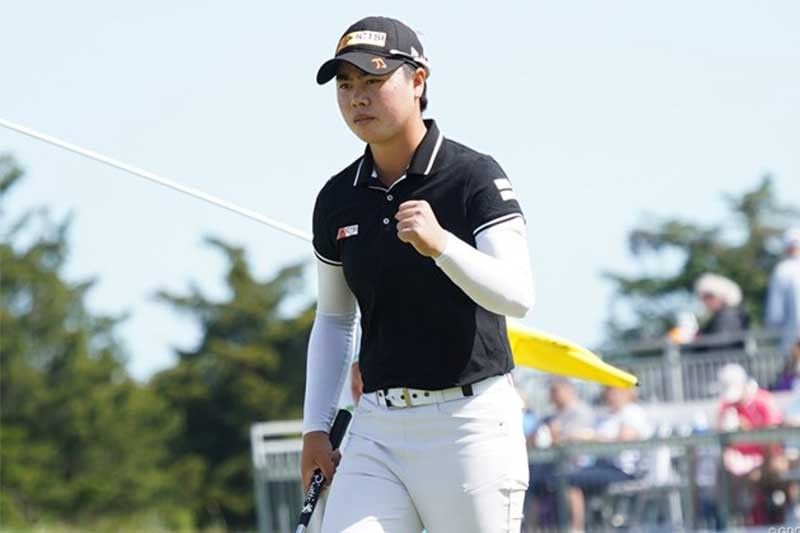 MANILA, Philippines — Unleashing a fist pump and a defiant demeanor after closing out with a birdie-eagle feat for a 70, Yuka Saso is back in play, not necessarily for a title crack but for at least a strong finish in the ShopRite LPGA Classic in New Jersey.

From two down to six behind, Saso will have a lot of rallying to do to overhaul a huge deficit against a pair of fancied Koreans who braced themselves for a virtual mano-a-mano after matching shots and putts at Seaview’s Bay course in the first two days on their way to 11-under 131s after 65s Saturday.

Saso rebounded from a double bogey-bogey mishap from No. 12 with that explosive windup but her one-under card in light breeze in morning play and a 137 total put her too far behind Jin Young Ko and Inbee Park, the world’s Nos. 2 and 3, respectively, who fired 13 birdies each and traded 21 pars and two bogeys to move on top of the heap, two shots clear of a hot-charging Thai Patty Tavatanakit, who fired a solid six-under card to secure the last spot in the championship flight at 133.

Saso nearly holed out with an eagle-2 on No. 5 to move from joint 11th to a share of fourth at 5-under but after recovering a stroke from a missed green miscue on the eighth with another birdie on the next, disaster struck the reigning US Women’s Open champion.

Ruing a flubbed birdie putt from 10 feet on the par-3 No. 11, Saso overshot the next green from 50 yards and needed two more shots to reach it then two-putted. Reeling from that double-bogey misfortune, she yielded another stroke on No. 13 and dropped out of the Top 10.

“I didn’t know what to do and just reflected on my mistakes,” said Saso, who slipped to joint 16th. “If you get angry, you can’t focus so I took some time and tried to regain my composure.”

The result was a solid drive into the wind toward the sea on the par-4 14th, leading to a birdie. Though she dropped another stroke on the next, the ICTSI-backed ace canned in a long putt for birdie on the par-3 17th then eagled the closing par-5 hole from 26 feet.

“I passed the elims so I want to do my best so that I can play better,” said Saso, who was near perfect off the mound with just one missed fairway. But she struggled on her approach shots and missed eight greens and groped on the unreceptive surface majority of the way before rolling in those long putts in the last two holes to save her day.

The two other ICTSI-sponsored bets, Bianca Pagdanganan and Dottie Ardina, likewise made the cut pegged at even 142 although the former blew a solid backside start of 31 with three bogeys in a four-hole stretch from No. 4 before birdying the ninth for a 70 and a 139.

Below the cutoff line heading to the 18th, Ardina chipped in for eagle then pumped her fist and hugged her caddie as she salvaged a 70 and a 141 and a coveted Sunday spot at joint 62nd.

American Brittany Lincicome shot a 67 to tie Nanna Madsen of Denmark, who carded a 68, at 134 while Aussie Su Oh also came away with a six-under 65 to join France’s Perrine Delacour, who shot a 68, and erstwhile joint leaders So Yeon Ryu, also of Korea and England’s Jodi Shadoff, who matched 70s, at sixth at 135s, four shots off Jin and Park.

The rest could be too far behind to pose a threat given the leaders’ form and the par-71 course’s length and conditions with Stacy Lewis carding a 66 for joint 10th with fellow Americans Marissa Sheen and Andrea Lee, who turned in similar 68s, and Cheyenne Knight, who posted a 69, and Canadian Brooke Henderson and Celine Boutier of France, who submitted identical 70s.

Matching Saso's five-under overall card are Korean Sei Young Kim (65), Maria Fassi of Mexico (67), Jaye Marie Green of the US (69) and Irish Leona Maguire (70), all vowing to wage a fiery charge while hoping the frontrunners would fumble and stumble in the last 18 holes of the $1.75 million, three-day championship to get a stab at the crown.

But while the Bay layout continued to yield low scores, some notables failed to advance, most specifically Saso’s rival Nasa Hataoka, who had three three-putt miscues for a 74 and a 143 and missed the final round a week after ruling the Arkansas Championship. Also out of play were last year’s runner-up Jennifer Kupcho of the US (73-143), India’s rising star Aditi Ashok (73-146), US top amateur Megha Ganne (76-146), LPGA Tour driving leader Anne Van Dam of the Netherlands (77-150) and last year’s champion Mel Reid of England (79-150).