How Init Sa Magdamag got a twin sister 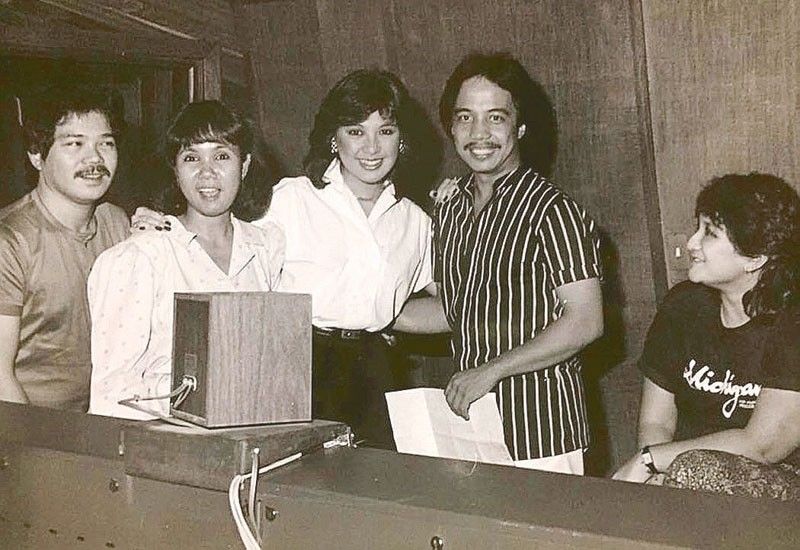 This is the story of how Init Sa Magdamag got an almost identical twin sister in Kahit Na.

It was in the summer of 1983 when composer Willy Cruz and I were asked to write the theme song of a movie titled Init Sa Magdamag.

No big deal really as we had already worked together before and even had some hits like Kumusta Ka by Nonoy Zuñiga. Still it was our first for Viva Films and therefore very important for us.

Viva at that time was known not only for its sleek well-crafted melodramas but also for its theme songs. Those were effectively used to promote the films and usually became big hits like P.S. I Love You or Gaano Kadalas ang Minsan, which were written by George Canseco.

Not only that, Init was from the onset of an exciting challenge. The stars were the lovely Lorna Tolentino, the versatile Dindo Fernando and Joel Torre, fresh off his debut in Peque Gallaga’s Oro Plata Mata.

At the helm was actress-turned-director Laurice Guillen with script by Raquel Villavicencio and cinematography by Romy Vitug. Willy was musical director.

The tale of Init Sa Magdamag is about a woman and her many faces. She is a wife and mother living a simple life in a seaside town. She is a beautiful model pursued by men. She is the mystery woman in a motel murder case. She has a lover with a penchant for kinky sex.

The plot pretty much laid out what the song was going to be about. Willy came up with a beautiful melody and I went to work on the lyrics. It was enchanting. It took only one draft and soon we had a song that embodied the intriguing plot of the picture and which met the approval of Viva and Laurice.

Then a snag. We had no singer. We wanted Sharon Cuneta. But she was only 17 years old and had a wholesome image. How can she do something like Init Sa Magdamag? So we decided to go for Hotdog singer Zsa Zsa Padilla who was going solo. It would be great if she would sing a duet with the hot-selling Nonoy.

But Jem Recording with which Zsa Zsa was under contract nixed the idea. They did not want her releasing her first single under Viva ahead of the album.

This was when Sharon again came into the picture. Why not Sharon indeed? She did an excellent job with Canseco’s Langis at Tubig when she was only 15. Her singing should be matured enough for Init. Bless the future Megastar’s heart, she said yes. Problem solved. We thought.

A day later, Willy was on the phone in a panic because Zsa Zsa was feeling bad about losing Init. What should we do? Jem was adamant and Viva had a Sept. 22 playdate to meet. Sharon and Nonoy were ready to record.

Willy’s solution was to keep the original melody for Zsa Zsa and compose a new one for Init. He kept my lyrics intact save for the bridge.

The magic stayed intact despite the different melody. Sharon and Nonoy breezed through their solos and did a wonderful duet with vocal arrangement by Babsie Molina and musical arrangement by Willy. The feeling that we had a future classic in our hands was all over the Greenhills Sound Studios. Init turned out perfect.

Willy then asked if I could do new lyrics for the old melody for Zsa Zsa. I wanted to but couldn’t. The original Init was too embedded in my mind. I wanted to write for Zsa Zsa but not that one. So Willy went to work on the lyrics and came up with Kahit Na, which became her first single.

I am happy that 38 years later people still enjoy listening to Init Sa Magdamag. The song has been performed by Jun Polistico, Lea Salonga, Eva Eugenio, Joanna Ampil, Ariel Rivera and others over the years.

The latest is by Jona who was not even born yet when the movie was shown. It is now the title song of a soap series starring Gerald Anderson and Yam Concepcion.

To this day though, whenever I think of Init, it is that melody which became Kahit Na that plays in my head. Slower, flowing, more legato, “Kung gabing ang dilim ay laganap na…”

Share
Previous As ICUs fill up, doctors confront grim choice of who gets life-saving care
Next Cebu City starts vaccination of elderlies vs. Covid-19