In Winnipeg during a pandemic, if you build a backyard ice rink, they will come

Share
Manitoba·New
What do you do in the middle of a pandemic, when winter weather has arrived and almost every form of recreation is banned? Build an outdoor rink. And that’s exactly what many Winnipeggers are scrambling to do. 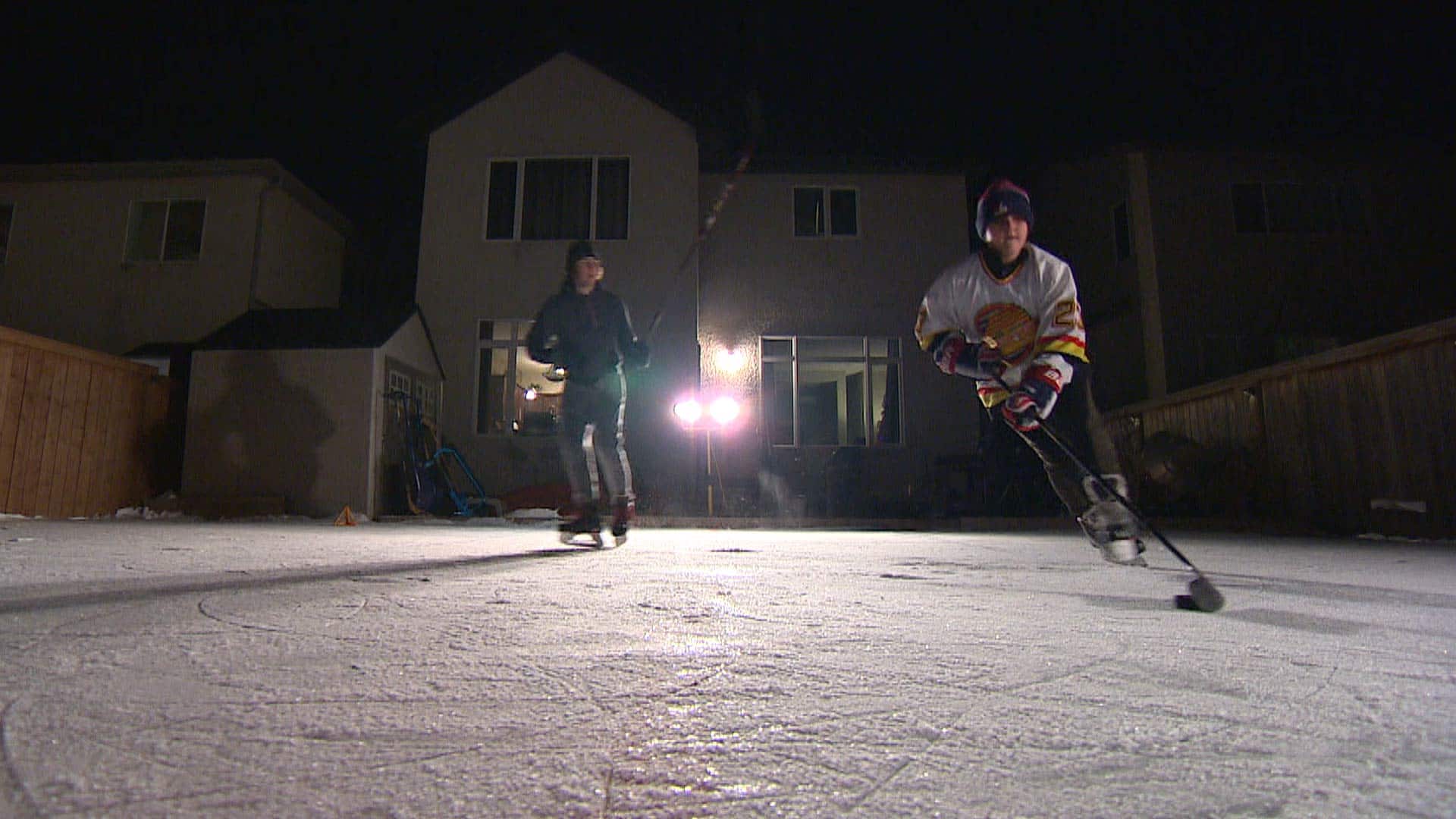 Stick-handling around the pandemic on a backyard rink

With almost every form of recreation banned in Manitoba to prevent the spread of the coronavirus, outdoor ice rinks are exploding in popularity — and business is brisk for those who build them.1:50

What do you do in the middle of a pandemic, when winter weather has arrived and almost every form of recreation is banned? Build an outdoor ice rink.

"You get a lot of stick-handling out here. You can get pretty fast if you go in circles," 14-year-old Jake Myshkowsky said last week, as he and his brother faced off on the backyard rink they built with their dad. "I've put a couple of holes through the fence."

Both boys miss playing hockey on their teams, with up to three practices and two games every week.

For them, their backyard rink has become a lifesaver.

The Myshkowsky brothers are part of a trend in Winnipeg that began when Manitoba went into Code Red pandemic restrictions in November.

Gyms, arenas, swimming pools and even outdoor playgrounds were closed — and Manitobans were told to stay home to reduce transmission of COVID-19.

For anyone hoping to set up a home gym, it's hard to find a barbell or exercise bike anywhere in the city.

"People are stuck with no gyms, no nothing. They need exercise," said Ryan Starkell, owner of My O.D.R. (which stands for outdoor rink).

"I think it's great for mental health to have people to be able to go outside their backyard and exercise a little bit, get a skate and have some fun and let loose, you know, and maybe stop thinking about everything else that's bad that's going on in the world right now."

Starkell started his business in September as a way of making a little extra cash to buy Christmas presents for his five children.

He thought he might build a dozen rinks for friends and family, but his business has exploded.

Starkell has already hired a handful of people to help him build and fill the rinks with water. He's even started offering a DYI package, but he can still barely keep up.

"Everyone wants their rink built now," Starkell said, taking a short break during a rink-building project.

"It's a lot of demand, and it's more than I expected to take on, that's for sure. But doing my best to manage it, you know, not sleeping too much, really trying to cram as much in as I can."

Winnipeg isn't the only place seeing the outdoor rink craze.

NiceRInk is an American family business that sells full do-it-yourself rink kits and all of the individual pieces — but it's taking orders faster than it can manufacture the product.

"We're easily double up right now and just everyone just running ragged as much as they can. Nights, weekends, just trying to get everything out for everyone as fast as we possibly can…. Sometimes crisis creates opportunities."

Stoller grew up playing high-level hockey in the USHL, the top junior ice hockey league. Some of his fondest childhood memories involve the outdoor rink his father built, and he still scrimmages with his son on his backyard rink.

"We love hockey. And when you put a rink in the backyard, there's just nothing like it," Stoller said.

NiceRink ships to Canada, and its products can be found at a major retailer here. The company is negotiating a distribution agreement with a second major Canadian retailer, Stoller said, adding he can't disclose more details just yet.

It's not just backyards being made into rinks.

As they have for generations, people are also shovelling snow off rivers and their neighbourhood retention ponds for a place to skate — something the City of Winnipeg is warning against.

The ice on the rivers is still thin and fragile, and frozen retention ponds are never safe.

The water piped into them carries road salt, making the ice unstable and potentially dangerous, he said.

Every weekend, there are numerous water rescue calls, forcing police, paramedics and fire personnel to respond. On a recent weekend, there were 17 calls, reporting people walking or skating on thin ice around the city.

"We don't want to divert first responders right now, at a time when we know they're being called … to help out at personal care homes, for example. We don't want to stretch those resources any more than necessary," Bowman said.

The city has also stepped up patrols of retention ponds by bylaw officers to remind people it's prohibited, as well as hazardous.

"We have to utilize the options that are available under provincial public health orders," the mayor said. "Ice skating isn't one of them right now unless it's in a backyard rink."