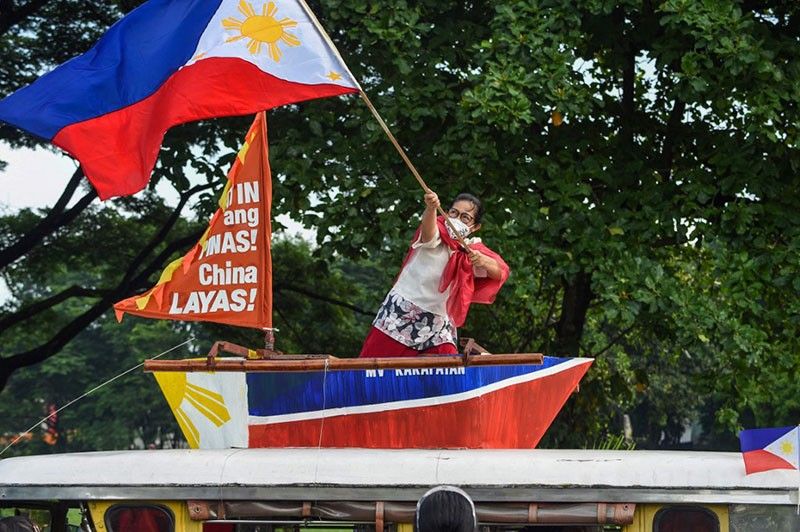 MANILA, Philippines — Several groups on Independence Day, Saturday, trooped to the Chinese embassy to protest the regional power's continued incursions in the West Philippine Sea and what they described as President Rodrigo Duterte's failure to protect the country's sovereignty in the area.

"We are not really free and independent. Foreign-dictates over our national economy, politics, culture and way of life persist," Kilusang Magbubukid ng Pilipinas said in a statement.

Amihan National Chairperson Zenaida Soriano said the holiday "is a reminder that the national fight against colonizers and foreign oppressors is a fundamental part of Philippine history."

June 12, Saturday, is the 123rd anniversary of the Philippine Declaration of Independence from Spain, its colonizer of over three centuries.

"That the Duterte regime has willingly allowed China’s violations in the West Philippine Sea to continue unaddressed is an outrageous insult to the Filipino people of past, present and future," Soriano also said.

China does not recognize the arbitral ruling that invalidated its extensive nine-dash claim over the South China Sea and continues to send fishermen, coast guard ships and maritime militia ships to the West Philippine Sea which is the portion of the critical waterway within the Philippine exclusive economic zone.

After campaigning on taking a strong stance against China in the West Philippine Sea, Duterte early into his term said he would "set aside" Manila's arbitral win to pursue closer ties with Beijing.

A few years later, Duterte announced that he entered into an agreement with Chinese President Xi Jinping allowing China to trawl in Philippine waters. Malacañang now denies that such an agreement exists.

The Kalikasan People’s Network for the Environment (Kalikasan PNE), whose members also joined the protest at the Chinese consulate, sounded the alarm over the displacing of Filipino fisherfolk "as President Duterte blatantly surrenders the West Philippine Sea to China."

"It is also a surrender of our constitutionally guaranteed enjoyment of our national patrimony marine biodiversity, fisheries, and offshore oil and gas reserves,” Leon Dulce, the green group's national coordinator said.

Kalikasan PME, along with KMP, cited scientists who estimate that China's damaging of coral reefs as it militarizes the West Philippine Sea costs Manila P1.3 trillion each year.

"The Duterte legacy has its roots deep in environmental destruction. Aside from the disregard for the West Philippine Sea, the recent Executive Order 130 lifting the Mining Moratorium paves the way for 100 new suspectedly Chinese mining projects," he added.

Here’s how you can upgrade to Windows 11 early

DOH to ‘gradually’ include antigen test results in COVID-19 tally

A drug suspect was killed, six more were arrested and another P13.6 million worth of …