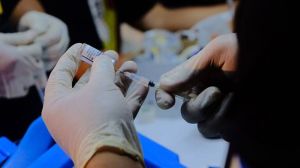 A PHYSICIAN told a Quezon City Regional Trial Court on Monday what the government has been doing all along is inoculating children against Covid-19, not vaccinating them.

The opinion of Dr. Benigno Agbayani Jr., co-founder and past president of the Concerned Doctors and Citizens of the Philippines, was sought by Judge Maria Cherell de Castro-Sansaet, who is hearing the petition of some parents to stop the mandatory administration of Covid shots to their children.

In an interview with The Manila Times after he gave his testimony, Agbayani said there is a big difference between inoculation and vaccination.

What the government is doing is inoculating children, he declared.

“It was only inoculation because the Covid-19 vaccines were merely granted emergency use authorizations or EUAs,” he said.

It could only be classified as vaccination if a vaccine has been issued a certificate of product registration by the Food and Drug Administration.

“Only EUAs were granted to existing Covid-19 vaccines. Therefore, there must be a surveillance on the safety and efficacy of the same and the persons in charge of public health should be aware of the red flags of an experimental vaccine, such as deaths and injuries following Covid shots,” Agbayani said.

He said he told the court about some patients contracting Bell's palsy after they received Covid-19 shots.

“Therefore, considering that there are adverse events that may occur following the inoculation of an experimental drug, there should be no coerced mass vaccination, especially to our children who are more vulnerable members of the society,” he said.

A graduate of the University of the Philippines' College of Medicine and former chairman of the Orthopedics Department of the Manila Doctors Hospital, Agbayani said Covid vaccines even led to deaths in some countries, a fact that was kept from the public.

He said even Congress accepts that the Covid-19 vaccines in the market are still experimental in nature, based on what is stated in Republic Act 11525 or the “Covid-19 Vaccination Program.”

PAO chief Persida Rueda-Acosta, who stands as the principal counsel of the parents who are seeking a writ of injunction and temporary restraining order from the court, said that after Agbayani, two other doctors, PAO Forensics Division chief Dr. Erwin Erfe and Dr. Romeo Quijano, a pharmacologist-toxicologist, will take the witness stand in the next hearing set this week.

In his sworn affidavit, Erfe questioned the sincerity and integrity of the Department of Health (DoH) in administering Covid-19 jabs to minors.

“The DoH did it in Dengvaxia cases. It was in bad faith when it intentionally hid from the public the adverse effects of the controversial anti-dengue vaccine and now it is committing the same grave error again as it continues to conceal from the public about the ill-effects of Covid-19 vaccines especially for children,” Erfe said.

PAO records showed that the deaths of more than 160 schoolchildren were linked to the anti-dengue vaccine Dengvaxia, which the agency had claimed was administered in 2016 despite the fact it was still under trial or experimental.

Quijano will attest to the danger of Covid-19 vaccines to human health, which he described as already obsolete against the disease.

The main petitioners — broadcast journalist Dominic Almelor, a father of a 7-year-old boy; and Girlie Samonte, a mother of two boys — are also expected to take the stand, PAO said.

The parents claim that the Covid-19 mass vaccination of 5- to 11-year-olds was unconstitutional and must be stopped.