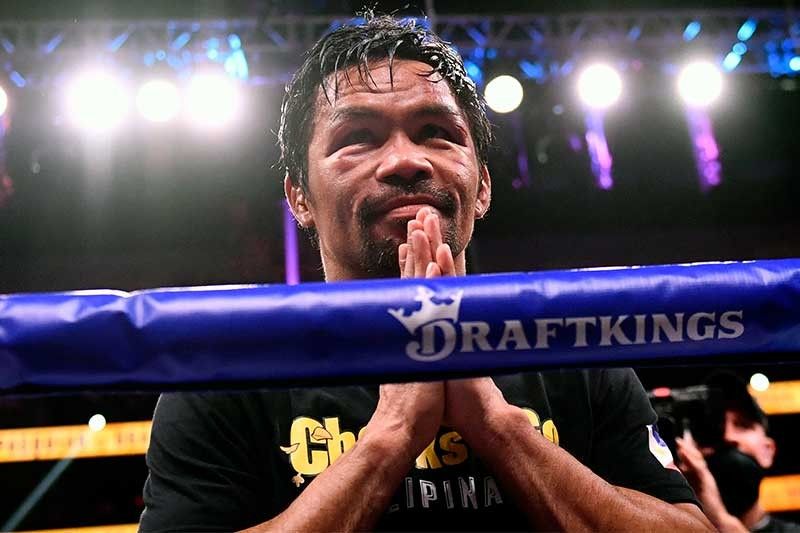 MANILA, Philippines — The boxing world saw one of its brightest stars closing a chapter today after Sen. Manny Pacquiao announced his official retirement from the sport on Wednesday.

Boxing's only eight-division world champion, Pacquiao hung up his gloves after fighting in four decades as he pursues a presidential post in next year's national election.

The sports world, including some of the largest international media agencies, hailed Pacquiao after his illustrious career.

Fox Sports called Paquiao's run in pro boxing, which began in 1995 when the then skinny fighter was just 16, an "unbelievable career" and dubbed him a "living legend".

What an unbelievable career for the living legend. THANK YOU Manny Pacquiao! ?? pic.twitter.com/vkcr5CzSLe

This was also mirrored by Premier Boxing Champions, who promoted Pacquiao's last fight against Yordenis Ugas.

Thank you for your contribution to this great sport of boxing, @MannyPacquiao. ???? pic.twitter.com/kHyRcXbIcs

"Thank you for your contribution to this great sport of boxing," they wrote.

Other media outfits to pick up Pacquiao's retirement were Bleacher Report and ESPN's Sports Center.

Manny Pacquiao announces he is retiring from boxing

He finishes with a 62-8-2 record and the only eight-division world champ ever ???? pic.twitter.com/ppICtfm5BH

Manny Pacquiao has announced his retirement from boxing.

???? Only boxer to hold world titles in four different decades

???? Only boxer to win a title in eight different weight classes