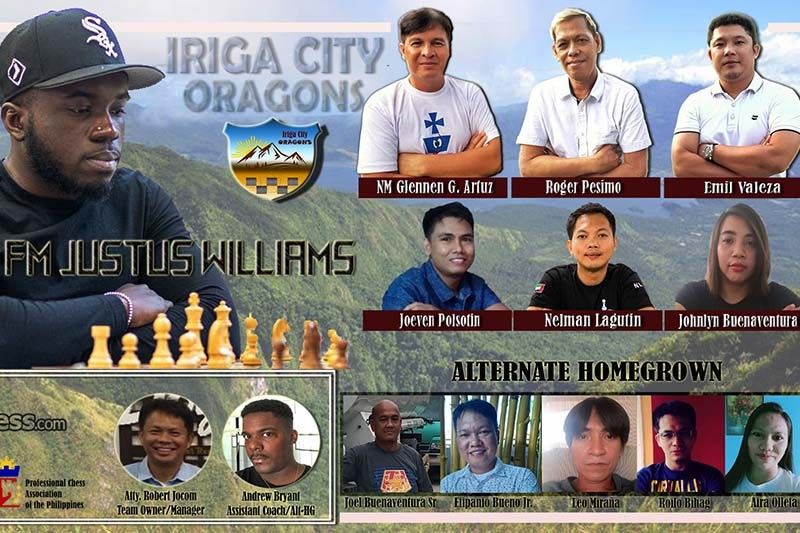 MANILA, Philippines — The Iriga Oragons of the Professional Chess Association of the Philippines (PCAP) have turned to American National Master and Fide Master Justus Williams to spearhead their Wesley So Cup campaign.

Williams, who hails from the Bronx in New York is the youngest African-American to win the title of National Master at the age of 12. Furthermore, he made news as a 14-year-old when he defeated Magnus Carlsen although it was a casual match.

During this Covid-19 pandemic, Williams also made the news when he oversaw a chess tournament inside the St. Louis (Missouri) County Justice Center where over 100 inmates participated in the program.

Said Williams of his program for the inmates, “What we are trying to do is to journal how chess is helping them while in here. There are a lot of great players in here.”

Hopefully, Williams can help the Oragons who finished 12th place in the Southern Division of the recently-concluded All-Filipino Conference with a 4-30 record.

The American will occupy Board 1 with newcomer Nelman Lagutin occupying Board 2. Johnlyn Buenaventura remains in the Lady’s Board 3 with Roger Pesimo on the senior Board 4, Joeven Polsotin, Emil Valeza, and NM and team captain Glennen Artuz on the homegrown boards from 6-7.

Atty. Robert Jocom is the team manager. Assisting Artuz as coach is Andrew Bryant, who will also alternate on the homegrown board.

Artuz waxed hopeful of the changes made to the Iriga Oragons, “Williams as our import will give our team a good performance. Hopefully, we will do better this second conference.”

The Wesley So Cup, the second of the three conferences of the maiden PCAP season begins May 15.