Is deploying cops really a ‘tried and tested’ pandemic response? 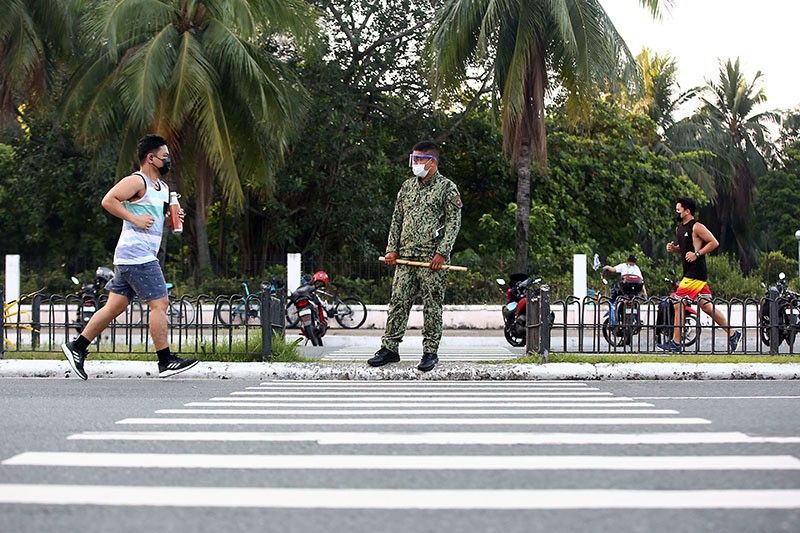 Much has been said about the approach of deploying the police and military — equipped with long firearms and riding armored vehicles — to enforce protocols in a health crisis. Medical collectives called it "devoid of science." Rights organizations warned it could be prone to abuse. Transport groups bemoaned the effects of checkpoints on the traffic situation for commuters.

Related Stories
Has pandemic response been recalibrated or is MECQ a repeat of the same policies?
Back to ‘disiplina’? With rising COVID-19 cases, gov’t scrambles to enforce health protocols anew

The eye test says all of them were right.

Over a year since cops were deployed to address a health crisis amid the world's longest lockdown, Philippine authorities remain unyielding in their belief in the approach.

391 days after the first enhanced community quarantine was hoisted, government officials are still convinced it yielded results amid the country's worst surge of cases.

Police Lt. Gen. Guillermo Eleazar, chief of the national police's coronavirus response arm, went so far as saying the strategy worked the first time in a statement at the start of the uniform curfew on March 14.

"Strong police visibility […] is anchored on the tried and tested formula which we implemented in Metro Manila in April last year and in Cebu City in June also last year wherein the deployment of more uniformed personnel in the streets and in the communities compelled the people to behave and eventually resulted in the reduction of COVID-19 cases," he said then.

As things unfolded a year ago, abuse at the hands of power-tripping enforcers has been documented again, prompting changes on the part of the national police.

"Whatever the violations, the chief has since directed our commanders in the NCR Plus bubble not to arrest violators. Warnings and fines only. The PNP has been doing this since the start of ECQ last March 29," Police Brig. Gen. Ildebrandi Usana told Philstar.com in a text message.

Is it really all the government can do?

Officials seem to think so.

More than 9,000 police personnel have been deployed to man the 1,106 quarantine control points within the so-called NCR+ bubble to strictly implement protocols amid the ECQ and uniform curfew.

On the first day of ECQ alone, the PNP disclosed that nearly 2,600 were arrested for various quarantine violations across Metro Manila, Bulacan, Cavite, Laguna and Rizal. Never mind that coronavirus transmission due to overcrowding in prisons was already a cause for concern earlier on in the pandemic.

This comes on top of the over 17,000 who have already been apprehended for supposed quarantine violations since the PNP started deploying cops to enforce uniform curfew hours in the capital region.

'We don't know where to stand'

"When there are a lot of people on the streets and there are mass gatherings, we get criticized for not doing our jobs, being pabaya (apathetic), and not effective in COVID-19 response," he said.

"When we deploy the police to enforce protocols, we are criticized for being 'militaristic' and 'heavy-handed.' What do people want the government to do?"

State forces can be of help

In the early months of the pandemic, Dr. Tony Leachon was an advisor to the coronavirus task force. Forced to step down due to strategic differences, he remains vocal on helping the country's response.

But for the public health expert, state forces can actually be crucial — for the right purposes and when guided by medical support.

"Let's say you use that for delivery of services, border control [or] checkpoints," he said in an exchange. "Normal citizens can't do that, but I suggest to have guidelines or implementation that won't have much medical complications."

Leachon cited how neighboring countries tapped their militaries too, but for manning borders and contact tracing. In the Philippines, its own tracing czar had admitted that such efforts have 'deteriorated.'

South Korea, for one, was known for digitalizing its tracing of possible patients. The Human Rights Watch said this includes a publicly available map showing if people may have interacted with the infected, as well as mobile phone notifications. Yet, often, this resulted in privacy concerns according to the watchdog.

A contact-tracing app used in Singapore has also raised privacy concerns after officials told its parliament that police can access the data. This, despite, the government earlier saying data would only be used for contact tracing.

What more can government do?

Asked what steps government has yet to make, Leachon said more people from the private sector should be allowed to contribute insights.

"They need to enlist public health advocates, data analytics, mathematicians…in order to solve the problem," he said. "It's a huge problem right now so you need a lot of opinion. I think there should be no monopoly of wisdom and knowledge."

Testing efforts should be ramped up too, he added. Other countries withstand COVID-19 surges because their tracing, isolation and quarantine protocols are in place, Leachon said.

Still, he said it might be too late to replace members of the IATF, as urged by groups and even lawmakers. Instead, it should add more experts from the medical and scientific field.

"It's about time we listen to them because for all the things that happened last year, there was no positive outcome," Leachon said, partly in Filipino. "Doing the same things and expecting [different] result, I don't think it will work. We need to do something else in order to solve this particular pandemic."

Law enforcement and mass testing are not mutually exclusive concepts, to be sure, but administration officials seem averse to alternatives. Despite calls for mass testing being over a year old, government officials still insist on tripping over semantics behind the phrase.

In a Palace briefing, National Task Force Against COVID-19 deputy chief implementer Vince Dizon insisted that the government should follow medical journals and statements from health experts to use risk-based and targeted testing strategy than testing the entire 110 million Filipinos.

“Mass testing is not recommended,” Dizon, who also serves as the government's testing czar, said in Filipino. "‘Testing is not the only solution to the pandemic). We cannot test our way out of this pandemic."

The Department of Health defines “mass testing” as testing all those who have been exposed to a confirmed positive case, not necessarily the entire population. Medical journal BMJ also says that mass testing for COVID-19 aims "to find people with active infection who are asymptomatic or presymptomatic so that quarantine, and rapid finding and testing of close contacts, can interrupt spread."

"To be effective, testing needs to be accessible even to the most disadvantaged people in society, and those tested need to receive support, information, and advice from experienced practitioners. Otherwise the system will be chaotic, wasteful, ineffective, and harmful," the journal said.

When medical collectives called for a return to ECQ as a "time-out" for the country's health system in August 2020, they also called for an end to the "militaristic" lockdowns of the Duterte administration.

"Doctors and healthcare workers must reclaim quarantine for what it should be: A public health measure aimed at saving lives by stopping the spread of disease. We must reject the distorted forms of 'community quarantine' being imposed on us, as these are devoid of scientific sense and health purpose, and serve only to oppress our people," they said then.

"If we are to implement a quarantine, it must be a medical quarantine, with healthcare workers in the lead and with clear health goals and outcomes. To truly benefit our overburdened healthcare workers, a new framework and new leadership direction than the ones we currently have are imperative," they also said.

Today, calls rallying against the repetitive strategy are resounding.

They did, too, a year ago, though it seemed nothing changed.

"The plan is very general right now…how is it different from what we've been doing for a year?" Vice President Leni Robredo pointed out on her weekly radio show.

Asked to comment on criticisms from advocates and lawmakers on the enforcement, Malaya said: "I honestly don’t know how to respond to it because our PNP are just doing their jobs to serve and protect the people in this time of the pandemic, exposing themselves every day to the virus in so many settings because it’s their sworn duty. And up to now, they have not been vaccinated."

Although the PNP calls it a tried and tested approach now, they made the same claim when soldiers and Special Action Force commandos were deployed to Cebu City over a year ago. It is not clear what their basis was at the time if experience from Cebu was precisely what merited the return-to-form today.

“The deployment of police commandos and soldiers here in Cebu City is not a militarization as some people would describe it, and therefore, is not a wrong approach…Rather, this is a tried-and-tested formula in the enforcement of quarantine rules," Eleazar said then.

“We believe that the presence of our SAF commandos will further compel hardheaded people to behave and follow the ECQ because our SAF are tough and strict when it comes to discipline,” he added.

It took a month of ECQ for Cebu City to revert back to MECQ in July 2020. Secretary Roy Cimatu, himself among the many former generals littering Duterte's pandemic response, attributed it to a "change of behavior" when it came to the population's compliance.

Policing a pandemic is not unheard of, but the issue lies in that even the most constructive of criticism has seemed to fall on the deaf ears of an "unreceptive" government that, as Interior Undersecretary Epimaco Densing puts it, is only "willing to take the criticism as long as it's true and it's verified."

"They get angry when you say that their response is lacking. They respond by saying you're trying to ruin the government. That's a scary approach because it would be better for you to acknowledge that there is a problem," Robredo said.