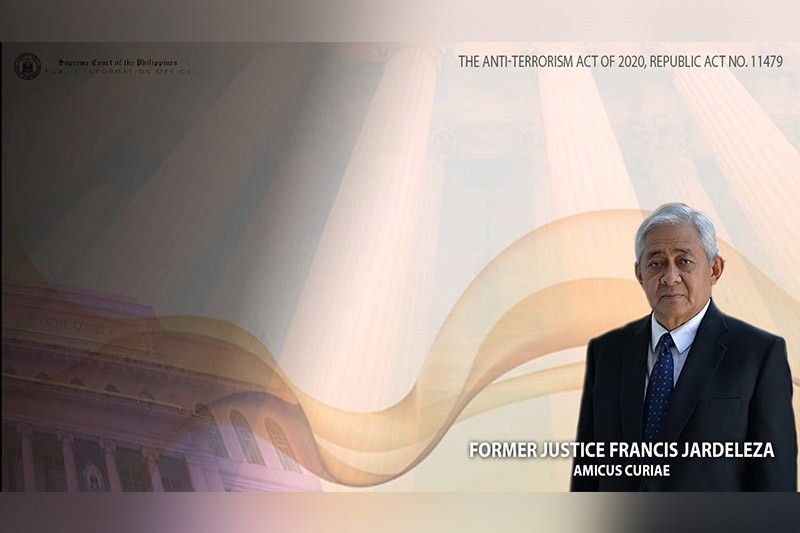 MANILA, Philippines — Retired Associate Justice Francis Jardeleza, tapped expert to help the Supreme Court to resolve anti-terrorism law petitions, told the tribunal that the legal challenges against the law due to petitioners’ lack of legal standing.

But retired Chief Justice Reynato Puno, also an amicus curiae (friend of court) in the case at bar, said the SC must resolve the petitions based on merit and not be dismissed based on technical grounds — but he opined that the petitioners failed “discharge” their duty in mounting a facial challenge against the law.

The SC appointed Puno and Jardeleza as amici curiae in the 37 consolidated petitions against the Anti-Terrorism Act of 2020. As experts, they will help the SC dispose of the issues raised before it.

Puno and Jardeleza delivered the statements on Monday, as the SC wrapped up its oral arguments.

The petitioners’ lack of legal standing has been one of the issues raised for the dismissal of the pleadings against the anti-terrorism law. They mounted a facial challenge against the law, arguing that the ATA infringes on freedom of expression and creates a chilling effect on the public.

Jardeleza, in his brief, cited the case of Aeta farmers Japer Gurung and Junior Ramos who are charged with ATA violation. Their petition in intervention was later junked as the SC noted the ongoing trial case against them.

He also noted that the Office of the Solicitor General also cited two other pending cases of ATA, and the recent designation of the Anti-Terrorism Council of the Communist Party of the Philippines-New People’s Army as terrorist organization.

“As for the matters of record, save for the petitions of Gurung and Ramos, and possibly of the three others in the Negros Occidental case, none of the petitioners in these cases has claimed direct, personal or constitutional injury, or has alleged actual prosecution under the ATA as to be entitled to relief,” he said.

Citing Southern Hemisphere v. the Anti-Terrorism Council, Jardeleza moved that all the 37 petitions be dismissed. “This is of course, without prejudice, to continuation of all other cases cited by the [solicitor general],” he added.

Jardeleza added that the claims of Gurung and Ramos of torture must be tried, under the doctrine of hierarchy of courts and following the rules of evidence before the trial courts. “Petitioners cannot short-circuit this process by simply invoking the ‘transcendental or paramount’ importance of their case,” he also said.

But for Puno, the petitioners have legal standing as he noted that they are challenging the law “because on its face, it infringes freedom of speech due to its vagueness and overbreadth.”

“A law that is vague and overly broad is considered as an immense evil and destructive of fundamental rights in a democratic regime, it ought to be struck down at the earliest opportunity by anyone in the body politic,” he stressed.

Puno moved to the SC that the petitions at bar be resolved on the merit and not dismissed outright based on technical grounds.

The retired chief justice noted that facial challenges on ground of the law’s overbreadth are difficult to mount since petitioners would have to prove that there can be no instance where the law is valid.

In the case against the anti-terrorism law, the petitioners “failed to discharge this heavy burden,” Puno said.

“With due respect to the petitioners, I respectfully submit that their valiant efforts fall short to justify striking down the whole Anti-Terror Law as unconstitutional on its face on the ground of vagueness or overbreadth,” he added.

But Puno noted that there can be subsequent challenges that may be filed against the law, on an applied basis.

Jardeleza also noted the same. Although said the petitions must be dismissed, he acknowledged that petitioners raised “very important” issues against the law, stressing that the ATA “implicates liberties dear to all of us.”

But he pointed out that there is “an absolute dearth of facts in the case record, as of the moment, to support a ruling against the ATA, at this time.”

Puno however pointed out “other areas of constitutional concern” on the ATA. This includes sections on designation, proscription, arrest without judicial warrants and on surveillance.

On designation, Puno raised concern on the Philippines’ automatic adoption of UN Security Council’s list of terrorists, stating that the criteria used by the international body may change from time to time and may be demanded by different legal landscapes in member-countries.

Puno also raised apprehension on the Anti-Terrorism Council’s designation of terrorists, as he noted that “the finding of probable cause may lack sufficient evidentiary basis.”

He continued: “The disconcerting question is whether there is a meaningful remedy on the part of person or organization designated by ATC as a terrorist when its finding of probable cause rest on erroneous ground.”

Puno also noted that there seems to be no remedies on Section 29 of the law that allows prolonged period of detention without judicial warrant under written orders by the ATC.

The retired chief justice added that the resolution of the petitions against the anti-terrorism law will “lead to the adjustment of the existing balance between the rights of an individual against the right of the state to safeguard the security of our people.”

In open court, Puno stressed: “The balance should not reduce individual rights into insignificance, for they are inherent to human dignity. Neither should the balance out an end to the security of the people for they did not enter into a ‘suicide pact’ when they ratified the Constitution. The ideal is for us to be both free and safe.”

Chief Justice Alexander Gesmundo wrapped up the oral arguments on Monday. Parties are given 30 days to file their respective memoranda.