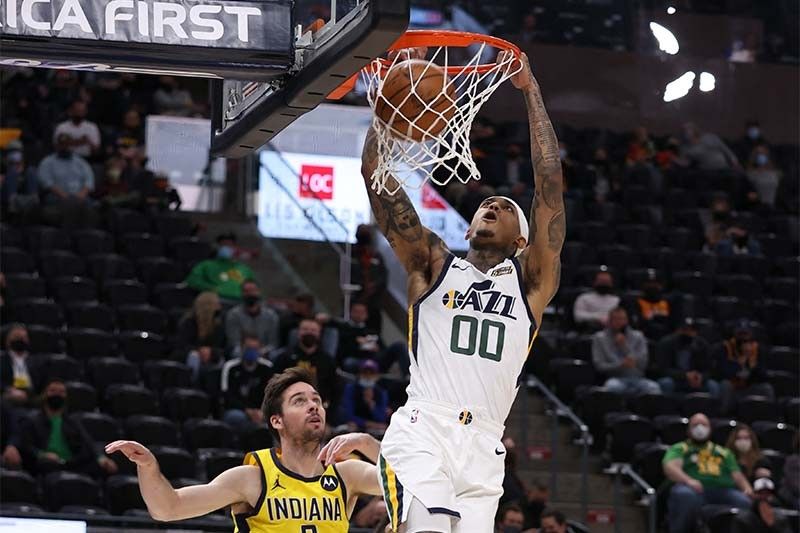 MANILA, Philippines (Updated 1:33 p.m.) — The Utah Jazz had an up-and-down night on Friday (Saturday, Manila time) after they beat the Indiana Pacers, 119-111 at home.

Though grabbing their 42nd win of the season to keep them firmly in front of the Western Conference standings, the victory came at the expense of losing Donovan Mitchell to injury with 8:18 left in the third quarter.

Mitchell landed awkwardly and couldn't put any weight on his leg and had to be helped off of the floor. He finished with 22 points on 7-of-15 shooting before leaving the game.

Clarkson contributed 18 points, five rebounds, two assists, and a steal to contribute to the efforts of filling the hole Mitchell's absence left.

Jazz defense amped up following the All-Star guard's exit to hang on to the win against the Pacers.

Gobert finished with 13 points, 23 rebounds, and four second-half blocks to fuel the defense for the Jazz.

Elsewhere, the Philadelphia 76ers doused the red-hot Clippers to nip their winning streak at seven, 106-103.

MVP frontrunner Joel Embiid finished with 36 points and 14 rebounds to lead the Sixers past an LA side that didn't have Kawhi Leonard due to a sore right foot.

With the win, the Sixers are now firmly in front of the Eastern Conference standings.

Meanwhile, the Detroit Pistons were able to eke out a win over the OKC Thunder, 110-104.

The Washington Wizards, for their part, outlasted the New Orleans Pelicans, 117-115 in overtime.

For their part, the Brooklyn Nets keep themselves within striking distance of East leaders Sixers with a win over the Charlotte Hornets, 130-115.

In the other games, the Portland Trail Blazers escaped the San Antonio Spurs, 107-106.

The Denver Nuggets nabbed their second win in a row after beating the Houston Rockets, 128-99.

The Memphis Grizzlies, and the Toronto Raptors beat the Chicago Bulls, and the Orlando Magic, respectively.

In the final game of the day, the New York Knicks tallied their fifth straight win after beating the Dallas Mavericks, 117-109.

Julius Randle had 44 points, 10 rebounds, and seven assists in the victory.