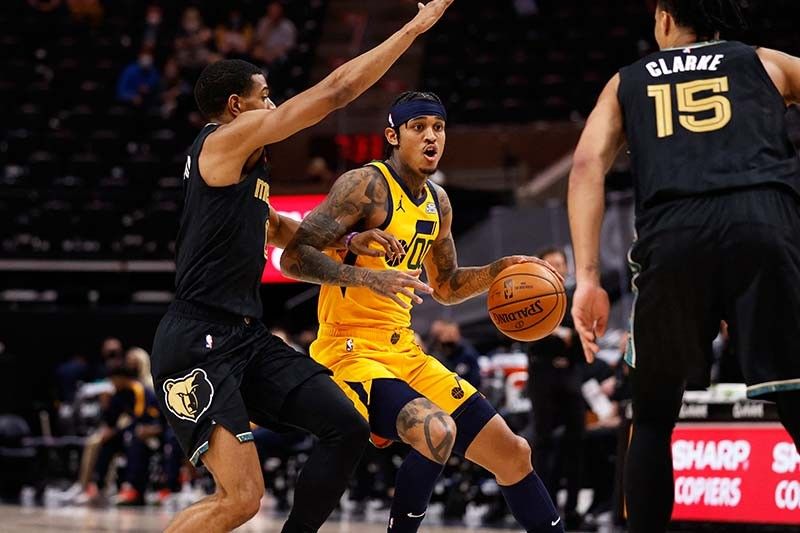 MANILA, Philippines — The Utah Jazz logged their 19th straight win at home after blowing out the Memphis Grizzlies, 126-110, in the second game of their back-to-back matchups on Saturday (Sunday, Manila time).

After coming close to a late game meltdown in their first meeting on Friday (Saturday, Manila), the Jazz left nothing to chance and maintained control of the game for almost the whole 48 minutes of action.

At the height of their dominance, the Jazz were up by as much as 30 points over Memphis.

Donovan Mitchell and Jordan Clarkson led the beatdown for the Jazz with 35 and 28 points, respectively.

The duo led five Jazz players who finished in double figures in the lopsided win that saw all available players for Utah see action.

Alec Burks and RJ Barret chipped in with 21 markers each to lead the Knicks past the depleted Bucks.

The win, however, proved costly for the Knicks who saw big man Mitchell Robinson come down with an injury in the first quarter.

In his brother's absence, Thanasis Antetokounmpo paced the Bucks with 23 points who dropped their second straight game after an eight-game win streak.

The Knicks' Derrick Rose also saw action for the first time since February 28 after his battle with the coronavirus and logged 13 points in 29 minutes.

For their part, the Houston Rockets avenged their disappointing loss at the hands of the Minnesota Timberwolves on Friday (Saturday, Manila) after winning their second game against each other, 129-107.

Meanwhile, it was back-to-back career performances for Zion Williamson with his 38 point outburst against the Dallas Mavericks — a day after his career-high 39 points in a loss against the Denver Nuggets.

Tim Hardaway Jr. paced the Mavs with 30 points of his own.

The Washington Wizards also logged a win after a 106-92 win over the Detroit Pistons.

The Wizards were buoyed by a triple-double from Russell Westbrook who tallied 19 points, 19 rebounds, and 10 assists in the win.

The San Antonio Spurs, for their part, soured Nikola Vucevic's debut for the Chicago Bulls after dealing them a loss, 120-104.

Dejounte Murray led a balanced team effort for the Spurs with 14 points, while Vucevic had 21 points in his first game as a Bull.

The Boston Celtics also took a win on Saturday (Sunday) after a 111-94 victory over the OKC Thunder behind Jayson Tatum's 27 points.