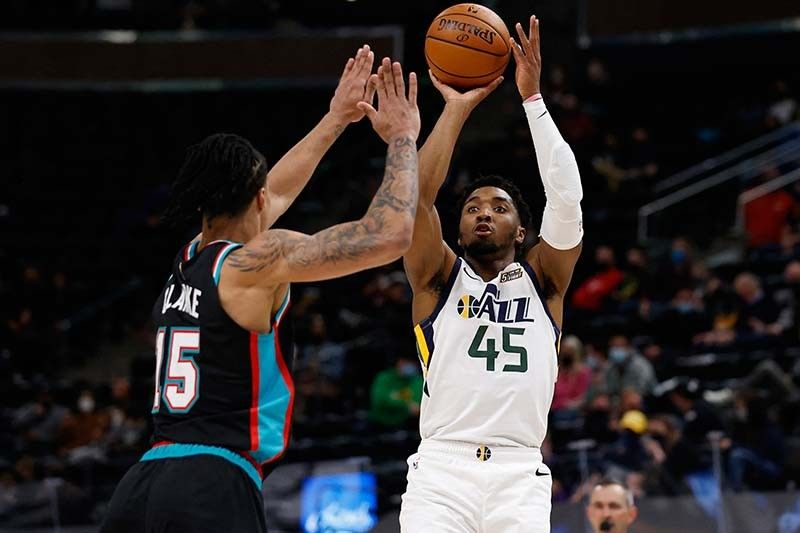 MANILA, Philippines — The Utah Jazz are back with their dominant ways after winning their fourth straight game, beating the Memphis Grizzlies, 117-114, at Vivint Arena in Utah on Friday (Saturday, Manila time).

The Jazz were dangerously close to squandering a 21 point lead when they saw the Grizzlies storming back in the fourth quarter.

Donovan Mitchell put enough space between the two squads when he converted on a finger roll layup with 1:25 ticks left, 117-109.

This averted disaster for the Jazz who went scoreless until the final buzzer with the Grizzlies cutting the lead to as little as three after a Dillon Brooks triple with 34.3 left in the game.

Fortunately for the Jazz, Brooks would miss a potential game-tying triple with 5.5 seconds left in the game to hold on for the win.

The Jazz tighten their hold on the top spot of the standings with a 33-11 slate.

Mitchell topscored for the Jazz with 35 points in the win, while Ja Morant had 32 markers in the losing effort for the Grizzlies.

Filipino-American Jordan Clarkson tallied 14 points off of the bench for Utah.

Elsewhere, the Houston Rockets went on a late game meltdown to lose their match up against the Minnesota Timberwolves, 101-107.

After leading by as much as 16 points, the Houston Rockets went scoreless in the final seven minutes of the game while the Wolves went on a scorching hot 22-0 scoring run.

This sends the Rockets reeling to their second loss in a row and losing nine out of their last 10 assignments.

Karl-Anthony Towns had 29 points and 16 rebounds to go along with eight assists in the comeback win for the Wolves.

Christian Wood, meanwhile, topscored for the Rockets with 24 points.

In the other games, the Denver Nuggets survived a career night from Zion Williamson and escaped the New Orleans Pelicans, 113-108.

James Harden, meanwhile, flirted with a triple double with 44 points, 14 rebounds and eight assists in the Brooklyn Nets' 113-111 escape over the Detroit Pistons.

The Phoenix Suns, the Boston Celtics, the Charlotte Hornets, the Portland Trail Blazers and the Indiana Pacers also tallied wins over their respective opponents.