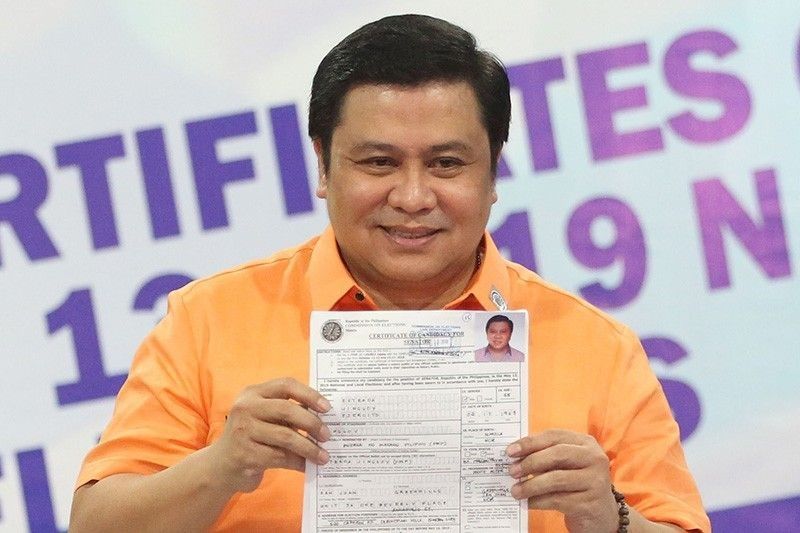 MANILA, Philippines — Former Sen. Jinggoy Estrada on Wednesday confirmed that he will run in the 2022 polls under the slate of presidential aspirant Ferdinand “Bongbong” Marcos Jr. and Davao City Mayor Sara Duterte-Carpio.

Estrada, who was part of the caravan of Marcos and Duterte-Carpio tandem in the southern Luzon province, said he is “very fortunate” to be included in the slate of the Marcos-Duterte tandem, which has been dubbed the "UniTeam".

Marcos, in the event streamed on Estrada's Facebook, said it is easy to campaign for a person whom he calls his friend.

"We have seen that in the long time that he (Estrada) was senator his record that he has passed many laws that helped many people," he said in Filipino.

(Sadly, he earned the ire of our friend at the Malacañang earlier that’s why his career was derailed, but now, we will help each other to bring him back to the Senate to serve again.)

It is unclear what Marcos was referring to, but Estrada was charged with plunder and graft cases related to the “pork barrel” scam in 2014/

He is accused of amassing P183 million worth of kickbacks by allocating portions of his Priority Development Assistance Fund (PDAF) to bogus foundations allegedly set up by alleged pork scam mastermind Janet Lim-Napoles. Estrada was allowed to post bail in 2017, after three years of detention.

He is eyeing a comeback to the Senate, after a failed bid in 2019, under Pwersa ng Masang Pilipino (PMP), the party of his father, former President Joseph Ejercito Estrada.

Earlier on Wednesday, News5 reported that Arroyo, donning a Duterte-Arroyo green shirt, and Marcos were present at an event for Rep. Jayjay Suarez (Quezon).

Political scientists have called this alliance as “unholy,” and a bid to keep themselves in power. — Kristine Joy Patag with News5/Dale De Vera