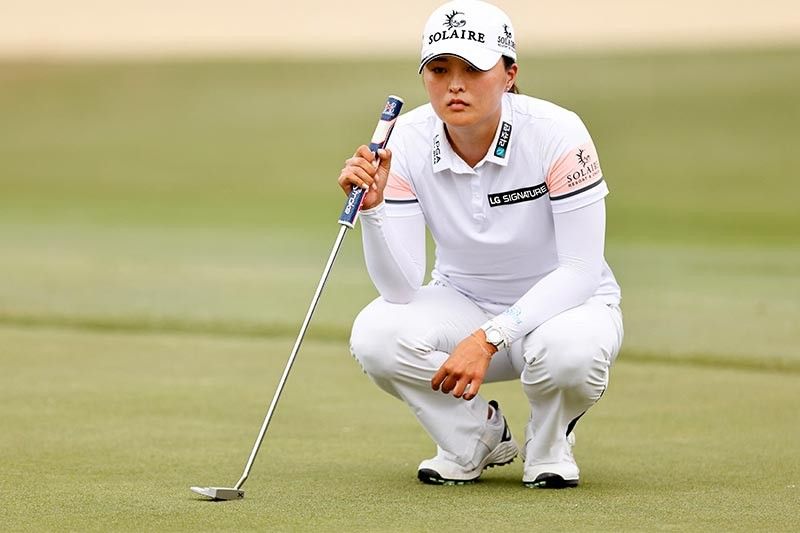 MANILA, Philippines – It took Jin Young Ko practically one round to figure things out. And when she did, the World No. 1 is back on the top in her first LPGA Tour start.

Ko, who opted to skip the three-leg Florida swing in January and February, opened with a birdie on No. 1 and put in a pair of back-to-back feats on Nos. 7 and 16 to turn in a solid 33-34 card that moved her from joint fifth to joint lead at 136 with fellow Korean Amy Yang halfway through the HSBC Women’s World Championship at Sentosa’s Tanjong course in Singapore Friday.

She kicked off her bid with a 69 Thursday, a round marred by double-bogey on the par-3 No. 4, but the Solaire brand ambassadress negated the miscue and her other mishap on No. 7 with six birdies to put herself in the blend at joint fifth.

Cashing in on one of the early flights, she delivered, and so did the unheralded Yang, who matched Ko’s output for the second day, spiking her round with seven birdies against bogeys on Nos. 3 and 15 as the duo grabbed a one-stroke lead over Canadian Brooke Henderson, Megan Khang of the US and young Thai star Atthaya Thitikul.

In contrast to Ko's game, Saso was still trying to find her rhythm, touch and range after two days.

Saso actually had looked forward to recovering from a shaky 71 start on an early tee-time but the reigning US Women’s Open champion found the switch not to her liking. She did birdie No. 13 in a backside start but struggled the rest of the way, fumbling with four bogeys (Nos. 17, 3, 5 and 6) against two birdies (Nos. 2 and 8) to end up with a 73.

From joint 29th, the ICTSI-backed Fil-Japanese tumbled to tied 43rd at 144, now eight strokes behind the Koreans in an event she was tipped to deal with strongly following a first missed cut stint in her last LPGA sortie in Florida last month after 22 tournaments of making it to the weekend play.

She missed just two fairways but reached regulation only 12 times and continued to grope for her putting touch, ending up with 30 putts after a 31 Thursday.

Henderson bucked the heat in a late start and shot a 68, forcing a three-way tie for third at 137 with Khang anchoring her bid with a backside 33, also for a four-under card.

In a brief stretch, Thitikul, who at 14 became the world’s youngest champion when she ruled the Ladies European Thailand Championship in 2017, hogged the spotlight with four birdies in the first six holes as she battled back from joint fifth to wrest control at seven-under overall.

She caught up Yang at eight-under with a birdie on No. 12 but bogeyed two of the next three then birdied the par-5 16th to save her own version of 68.

The talented Thai toughened up in the LET where she won two other championships then placed third in last year’s LPGA Q-Series before finishing tied for 11th and joint 45th in the first two legs of this year’s LPGA season in Florida.

Meanwhile, four others pooled 138s, including Korean In Gee Chun (68), Thai Pajaree Anannarukarn (69), American Angel Yin (69) and A Lim Kim of Korea (70), while Inbee Paerk and Danielle Kang stood at 139 after a pair of 71s, guaranteeing a spirited chase in moving day Saturday of the $1.7 million championship.

Saso, however, is too far behind from the mix although she is expected to wage her own fightback and gain some strokes from the leaders heading to the Sunday’s final round of the first of two LPGA events in Southeast Asia.

First day leader Patty Tavatanakit, on the other hand, proved out of sync coming off a solid 67 Thursday as the Thai major winner hit three birdies against five bogeys in tough conditions in the afternoon to end up with a 74. She fell to tied 21st at 141, now five shots off the new joint leaders.

Carlos Yulo to train in Paris ahead of world championships