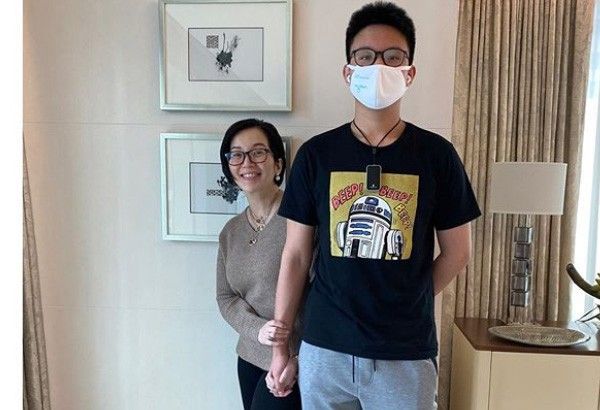 MANILA, Philippines — It looks like "Queen of All Media" Kris Aquino is training her son Bimby to follow her footsteps as TV host after Kris uploaded a video of Bimby interviewing her.

Kris recently posted a video on her Facebook page, showing Bimby asking his mom about his father James Yap.

“What did you think when you married my dad?” Bimby asked Kris.

“Honestly, I just took the jump. As in, leap of faith. Maybe I had that hang-up, because the first two serious relationships… The dad of your Kuya was not yet annulled, and the next one was also not annulled,” Kris answered.

“What made your dad special, initially he trusted me by telling me something that he didn’t have to tell me. I don’t want to dwell on it because it’s so way back in the past, and I think the people involved there should be allowed to have their privacy. I was impressed kasi he did not wait for me to hear about it from other people, or read about it in the tabloids,” she added.

Kris said that she did everything to make their relationship work.

“Your dad was very young at the time. You’re a lot braver when you’re young. I think I was at place naman na I felt I wanted to be married. I was 34, your dad was 11 years younger. I thought it could work. I honestly thought it could work, not realizing he was too young. We really came from two very different worlds. I wanted it to work,” she said.

Last October, Kris said in a virtual Shopee press conference that she’s encouraging her son to follow her or his father’s footsteps, but Bimby did not seem to have the heart for it.

“Bimb is a proud nerd. Please, I hope this is not misinterpreted by anybody. And it’s not because I’m stopping him. I’m actually encouraging him. Because I said, ‘You know, half of your DNA is actually genuinely, naturally athletic, so don’t fight it.’ But, he’s really focused on his studies. Who am I to argue with that? He’s really advanced. He’s only 13, he’s already into calculus," she said.