The sequel to the original film in 2018 shows Kate (Darby Cam) two years after she and her sibling saved Christmas. Now a cynical teenager, Kate can’t take spending Christmas in Cancun with her mom’s new boyfriend (Tyrese Gibson) and his son Jack (Jahzir Bruno) so she decides to run away. But as a magical troublemaker named Belsnickel threatens to ruin the North Pole and end Christmas for good, Kate and Jack find themselves in an action-packed adventure with Santa Claus (Kurt) and Mrs. Claus (Goldie).

The STAR and other Asian press recently had a virtual roundtable with The Christmas Chronicles lead stars, as well as director-producer Chris Columbus who revealed that Part 1 wasn’t supposed to be a Santa-centric comedy — in the first draft, he was supposed to appear for roughly 15 minutes only. But when the role was offered to Kurt, the veteran actor became so invested in it that he came up with a 100-page backstory for this legendary Christmas figure with over 1,700 years of history. This consequently inspired the Harry Potter and Home Alone filmmaker to expand the script and present to audiences a Santa Claus like “they had never seen before.”

As for Kurt, there’s a reason why the Santa role means a lot to him. He explained, “To an actor, playing Santa is like playing King Lear. You have to get to a certain age before you play him. When I read the first Christmas Chronicles, I felt good about the specific take on Santa Claus — fun and funny and simple and sweet, a Santa Claus to me that is very real, what I grew up with.”

Meanwhile, briefly introducing Mrs. Claus in the first movie was somewhat of a last-minute script addition. 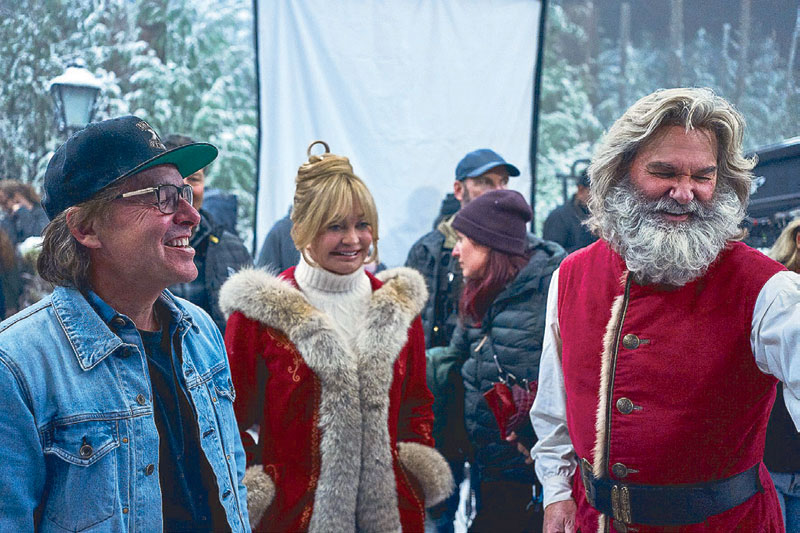 Director Chris Columbus on set with Goldie and Kurt.
Photos courtesy of Netflix

Kurt recalled, “When we were making the first Christmas Chronicles, as I was ad-libbing, I got this feeling Mrs. Claus was treated like how Columbo used to talk about his wife and no one ever saw her. So, of course, you wonder who she is. The minute you do that with me playing Santa Claus, subconsciously the audience starts thinking of Mrs. Claus as you know who — so we decided to do it before the end of the movie. We changed this one scene around, and I explained it to Goldie. And after some conversations with me, Chris and Clay (Kaytis, the director for the first movie), she said: ‘What the heck, it’ll be fun!’”

In the second installment, Kurt said that viewers not only get to slide into Santa and his wife’s world and life in the North Pole, but also explore their relationship and more importantly, know a little more the “very mysterious” Mrs. Claus.

“She’s a big part of Santa’s world, a big part of the North Pole, a big part of the Elves’ lives. The first one was a teaser, if you will, and we’re just really happy to man the opportunity and bring this one about, and Goldie was set in motion,” Kurt further told The STAR and other reporters.

As for Goldie, she had initially imagined Mrs. Claus to be a little more twinkly and pixie-esque, but eventually went with Chris’ idea of a more grounded and definitely motherly individual.

“When I first did it, (Mrs. Claus) didn’t have a character, she wasn’t still written. And so I went in and gave two lines and sort of indicated the fact that she was very much motherly,” she said during the interview.

“Until, oh my God, Netflix wants to do a No. 2 and Kurt evidently had been talking with Chris a lot about that, which I wasn’t aware of, and then they came up with a great character, which I was excited to play because she was magical. 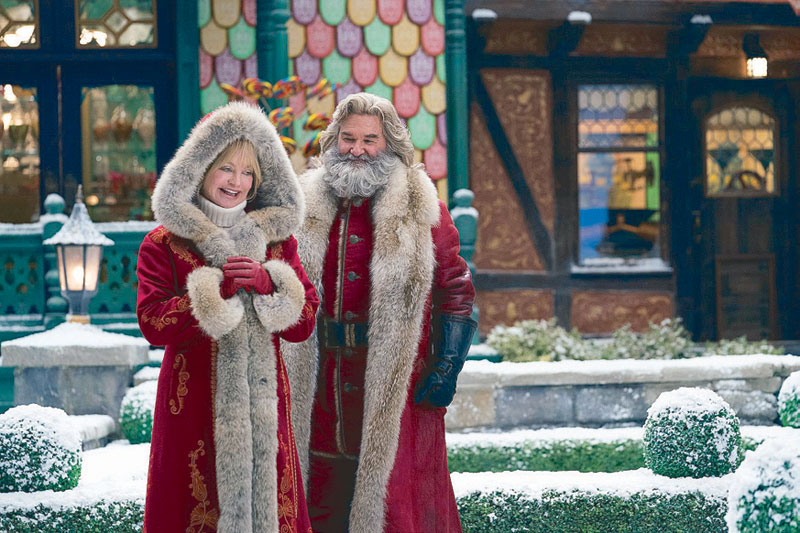 “And I wanted a current character of a female. I didn’t want to play anything that was sort of an archaic female character who made cookies. By the way, there’s nothing wrong with baking cookies but I wanted her to be more present. And they did and made her an absolutely magical character. So, I’m very happy to play her.”

Worth-noting as well is the fact that it’s been three decades since Goldie and Kurt have done a film together after their romantic-comedy Overboard in 1987. Acting side-by-side anew wasn’t challenging at all, said the enduring couple.

“It was a privilege to be able to do that again in our life. It was something we both were excited about. You know, we’re grandparents and making a movie for children and what could be a better thing to do? Also, these characters are actually interesting — the classic sort of characters that when you look at them, you go, ‘Oh yeah, I know that story.’ But you know, we’re giving a whole other story to believe, and I’m excited about that,” the Oscar-winning actress said.

The two were also asked about their thoughts on the celebration of Christmas, then and now, in the US and elsewhere in the world.

“That’s a good question because I’ve noticed very clearly ever since I was about 30, we’ve gone from about two to three weeks of commercials, beginning to sell you the idea of things, to all the way to Thanksgiving then it became Black Friday, whatever it is the day after Thanksgiving. Now, I’ve noticed that it has worked its way all the way back to Halloween, and even before that, I saw an ad, you gotta be kidding me!” Kurt said.

“It’s too early guys, let’s hold on to the specialness of Christmas. A time period for me is maybe two and a half to three weeks. I think, other than that, it’s a little bit of a push,” he added.

Goldie, on the other hand, missed those days when gifts had a more personal touch. “I remember before when I was a dancer, I was very modest and I didn’t have any money so all our Christmas gifts were handmade. And it was so fantastic to actually get something that my girlfriend made for me — a sweater, a hat or embroidered things.

“I think, one day, I would love to have a Christmas where we don’t go to the store, we make something that everybody makes something for each other. I’m like that and I made a lot of things in the ‘70s. I made jewelry out of stones I picked up, and there’s something about that that is so much nicer. And it’s become so, you know, basically it’s all about money, it is commerce and all of those things.

“And I’d love to get back to that time we cut down our own Christmas tree. It’s very crazy for me to say, but we’ve gone so far,” she said.

“I would love for that to happen to me, presents are a good idea. However, I must say, in my case, it might give a new meaning to ‘It’s the thought that counts.’ Hahaha!” quipped Kurt.

By the way, Kurt and Goldie were zooming with the press while seated close in a white couch in what looked like their home, and as the couple of nearly 40 years laughed at each other’s quips, it wasn’t hard to realize why they’ve been described as “relationship goals”.

But back to the subject of Christmas celebrations, The STAR had to ask how the reality of the COVID-19 pandemic has changed their holiday plans this 2020.

“So when we look at what is the good news, with all this horrible news, is that we actually spent more time, more quality time with our family than we would ever do again. So, that’s kind of how I feel. And, I think, we’re going to have a wonderful time.

“It’s like what my grandson said, ‘You know, this is going to be a really fun one Gogo, because we’ll be able to be in L.A., and we haven’t been here in a while. And we will all be together and it’s really going to be fun.’ And I just loved him for that because he was being optimistic about someplace he’d rather go. We usually ask them to go to our ranch but we’re not going to do that this year. So it’s like that, it’s about the spirit, and how we’re looking at things.”

Kurt couldn’t agree more. “Yeah, we’ll have a fun time no matter what.”

The Christmas Chronicles: Part Two is now streaming on Netflix.

Share
Previous As India braces for colossal vaccination campaign, one drugmaker has been waiting in the wings
Next Rep. Lito: Industry needs gov’t help