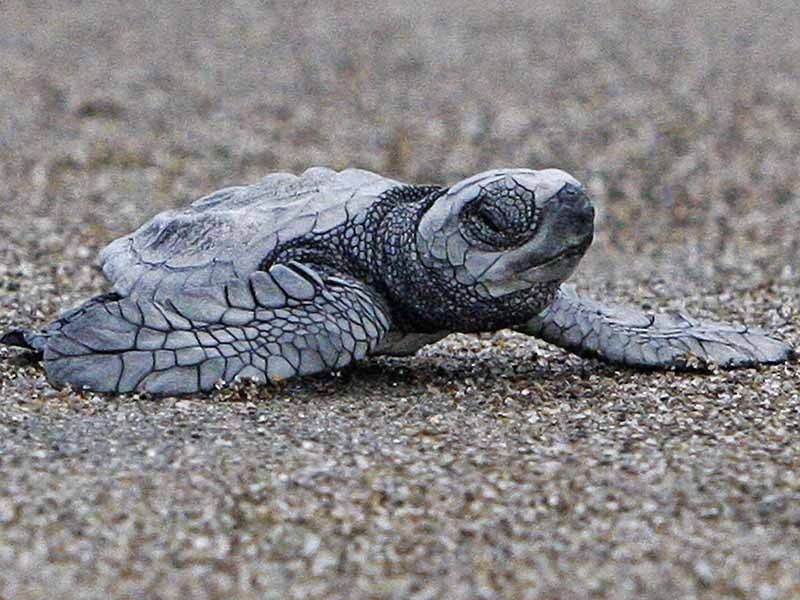 A baby olive ridley sea turtle heads to the sea in this undated photo.

BAGUIO CITY, Philippines — Lockdowns and movement restrictions during the pandemic have brought despair across the world, but not for olive ridley sea turtles.

The group is even anticipating seeing the most number of hatchlings this season (October-March), with 5,255 already hatched and released to the sea and with more of the 65 nests still to hatch in coming days.

What excites Tamayo is that the 65 nests at the hatchery are still growing because olive ridley turtle mothers keep returning to shores stretching from San Juan to Bacnotan to lay their eggs.

Last season, only 3,362 hatchlings from 38 nests were released to the sea.

Carlos’ father Toby, a former professor at the Philippine Military Academy, a veteran environmentalist and an accomplished beekeeper of the famous Tobee’s Apiary in Baguio City, is CURMA's founder.

He explains "sea turtles are a keystone species" and are one of very few creatures — manatees are another — that eat seagrass. Seagrass needs to be constantly cut short to help it grow across the sea floor. Sea turtle grazing helps maintain the health of the seagrass beds, he said.

Sea grass beds provide breeding and development grounds for numerous marine animals. Without seagrass beds, many marine species humans harvest would be lost, as would the lower levels of the food chain. The reactions could result in many more marine species eventually becoming endangered or extinct.

There are seven species of sea turtles and all, including the Olive Ridley, are listed on the IUCN Red List as either critically endangered or vulnerable.

According to the younger Tamayo, they are consulting marine biologists to shed light on the increase in the nesting. He suspects that "most likely (the cause is) beaches are quiet and dark in these COVID-19 times."

Marine biologists are also checking weather and wave patters that may have contributed to the hike in the number of nests this season, Tamayo said.

When the conservation program started,, local fisherfolk resisted efforts to protect the sea turtles, the younger Tamayo explained. "Olive ridleys were food to them. If not money."

But, since the community has been engaged as active partners in wildlife conservation through various education campaigns, many are now CURMA volunteers who go on beach patrols for nests.

Lobby work meanwhile spelled out support from the San Juan local government, which shelled out a P1,500 per-catch-incentive to fishermen who find olive ridley adults at sea or along the beach.

Beach resort owners have also partnered with CURMA to harmonize tourism and care for the olive ridleys.