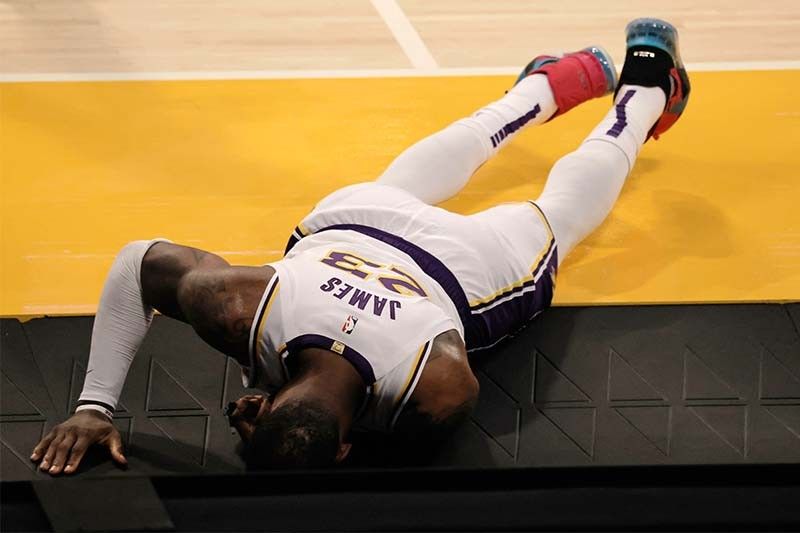 MANILA, Philippines — Expect to not see LeBron James with the Los Angeles Lakers for a while after the superstar suffered an injury in their 94-99 loss to the Atlanta Hawks on Saturday (Sunday, Manila time).

James is out indefinitely after he twisted his ankle in the second quarter when Hawks forward Solomon Hill fell on top of the four-time NBA champion's right ankle.

While James didn't sub out of the game right away, he shortly checked out and headed to the locker room after knocking down a three from the corner.

He finished the game with 10 points, four assists and a rebound.

James' injury is a high-ankle sprain that will sideline him indefinitely, per ESPN's Adrian Wojnarowski.

This is a huge blow to a Lakers side already competing without Anthony Davis, who is out due to a calf sprain.

The star's absence was made apparent by the third quarter where the Hawks outscored the defending champions, 22-12, which gave them enough breathing space to take the win — their eighth in a row.

John Collins led the way for the Hawks with 27 points and 16 boards.

Montrezl Harrell, meanwhile, stepped up on offense for the Lakers with 23 points.

Elsewhere, the Milwaukee Bucks tallied their sixth win in a row after holding off the San Antonio Spurs, 120-113.

Winning their 11th game in 12 outings, the Bucks are gaining momentum in the Eastern Conference and are catching up with leaders Brooklyn Nets and Philadelphia 76ers.

Giannis Antetokounmpo tallied 26 points and a season-high 15 assists to pace the Bucks in the win.

In the other games, the Philadelphia 76ers made easy work of the Sacramento Kings even without Ben Simmons, who sat out the game.

Tobias Harris scored 29 points, picking up the slack for the Sixers with Joel Embiid also still out due to injury

For their part, the Los Angeles Clippers blew out the Charlotte Hornets, 125-98.