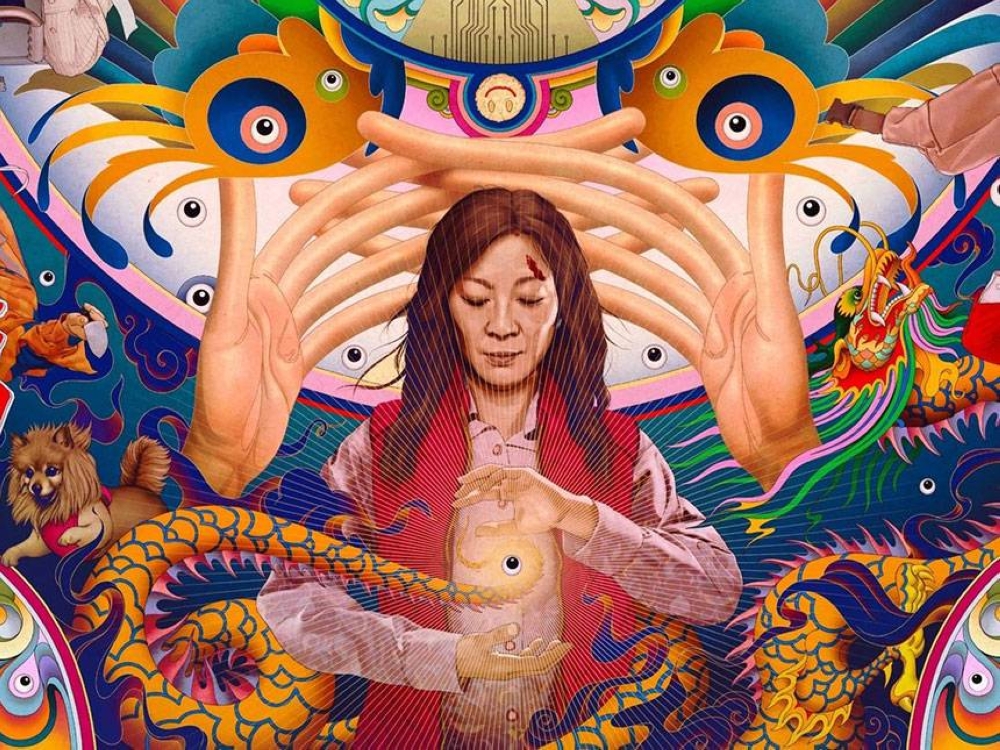 Michelle Yeoh as Evelyn Wang tries to handle everything, everywhere all at once.

“Everything Everywhere All at Once” is one of the most imaginative films you'll see this year. It is a take on the current “multiverse” /parallel universes /alternate realities concept popular in Marvel (and DC) with the “Loki” series, the recent “Doctor Strange in the Multiverse of Madness” and pandemic bestseller, “The Midnight Library” by Matt Haig.

This movie is kinetic, frenetic, out of control and downright surreal what with it does with hotdogs, raccoons, stick-on googly eyes and everything bagels. It also has action scenes which use an old leather fanny pack, rubber penises and tiny brown Pomeranians as weapons. Yet even with that absurdity and silliness, “Everything Everywhere All at Once” still manages to bring this wild ride home by giving it heart.

Michelle Yeoh is Evelyn Wang — a Chinese immigrant living in an undisclosed town in the United States.

We meet her on one of her many frazzled mornings — she's running her laundromat, dealing with the non-stop needs of her customers, making sure her father aka Gong Gong (James Hong) is happy, preparing a pot of noodles, trying to throw a celebration, running down the to-dos of the day with her husband Waymond (Ke Huy Quan) and talking to her daughter Joy while trying to avoid an important topic they must both discuss before the two can progress with their relationship.

On top of all that, she has a scheduled meeting with IRS officer Deirdre Beaubeirdre (Jamie Lee Curtis) to go through an audit of her business expenses.

It's while she's in the elevator just prior to the meeting when she learns from “Alpha Waymond” that she can jump universes by following some very weird, crazy, random instructions.

In the middle of a particularly stressful part of the meeting, she zones out and decides to follow one of the instructions — switching out both her shoes. Kind of like Alice with the bottle that says, “drink me.” Evelyn's reality starts getting warped and strange.

She sees several of the ways her life would have turned out, include one where she learns kung fu, becomes adept and winds up an international movie star.

As she learns more about universe jumping, her destiny leads her to ultimately facing-off with a nemesis known as 'Jobu Tupaki who can control and bend reality to her will. She has also come up with an EVERYTHING bagel that not only has sesame seed, poppy seed and salt, it also has every breed of dog, every ad on Craig's List and all her hopes and dreams among things.

The loaded bagel, along with a black circle and laundry spinning again and again are recurring images and themes in this movie. Are we all just on spin cycle, are we just constantly in circles, never jumping out of these loops out of fear?

It's great to see Michelle as this woman just trying to keep home, family and business together with demands for this or that coming in left and right. I'm always used to seeing her as some kind of badass — Emperor Philippa Georgiou on “Star Trek: Discovery,” Ying Nan in “Shang-Chi and the Legend of the Five Rings,” Matriarch Eleanor Young in “Crazy Rich Asians,” Yu Shu Lien in “Crouching Tiger Hidden Dragon,” and Wai Lin in the James Bond movie, “Tomorrow Never Dies.”

If all this commentary sounds like it's all over the place and that's it's hard to pin this movie down, it is. But so is life. We constantly have things to work out regarding our soul family, we often avoid facing these things head on but some find the courage to try over and over again to seek healing, meaning and acknowledge a transcendent love in our most important relationships.

“Everything Everywhere All at Once” opens on June 29 in the Philippines.