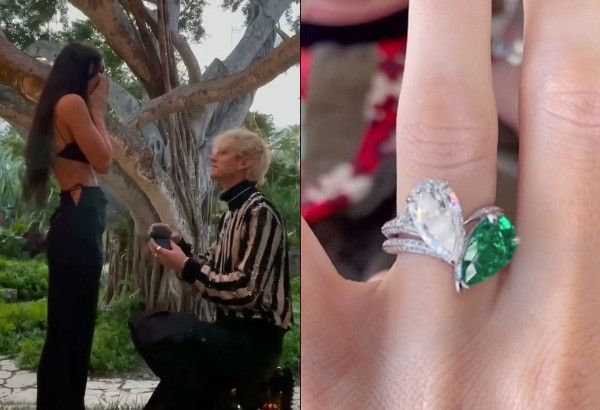 MANILA, Philippines — Actress Megan Fox's engagement ring has thorns and hurts to remove, and that's because her new fiancé, rapper Machine Gun Kelly, designed the ring with bands "that are actually thorns."

The "Bloody Valentine" musician, whose real name is Colson Baker, opened up to Vogue this past weekend in Milan amid their attendance at the Dolce & Gabanna fall 2022 menswear show. He noted that his new fiancée's custom two-stone ring has thorns "so if she tries to take it off, it hurts." The rapper quipped, "Love is pain!"

The musician described the ring further. "It's a thoroughbred Colombian emerald, with no treatment. It was just carved into the teardrop, straight out of the mine. And the diamond was directly from [jeweler] Stephen [Webster]."

"The concept is that the ring can come apart to make two rings. When it's together, it's held in place by a magnet," he continued. "So you see how it snaps together? And then it forms an obscure heart."

After separating from husband of over a decade, Brian Austin Green, Megan Fox started a new relationship with musician and actor Machine Gun Kelly in March 2020, after meeting on set of indie film, "Midnight In The Switchgrass." The couple announced their engagement earlier this month.