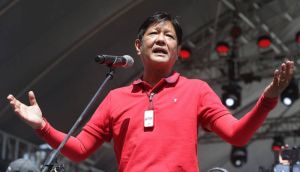 PRESIDENTIAL frontrunner Ferdinand “Bongbong” Marcos Jr. called on his supporters to be vigilant against possible cheating in the May elections following reports of irregularities in the absentee voting abroad.

In an interview on SMNI after the UniTeam's grand rally in Quezon City on Wednesday night, Marcos said he was concerned that the issue of cheating could negatively affect the turnout of the overseas absentee voting.

There were reports of pre-shaded ballots in Dubai, United Arab Emirates, voting outside of precincts in Singapore, and the exit poll in Hong Kong.

Marcos said his camp has asked the Commission on Elections (Comelec) to look into the reports to ensure the integrity of the elections.

The Partido Federal ng Pilipinas standard-bearer recalled his experience during the 2016 elections and cited it as a reason why he is wary of irregularities.

“Kailangan natin merong nakabantay. Kami naman sa UniTeam, sa mga partido namin meron kaming hinahanda na ganun kaya naman nakikita 'yung mga nagiging problema. Wala talagang ibang gagawin kundi magbantay kahit sa May 9 (We need to have someone to watch the counting. The UniTeam and the parties involved are readying such a group that will do nothing but watch over the votes even on May 9),” Marcos said.

He filed an electoral protest before the Supreme Court, sitting as the Presidential Electoral Tribunal, which was dismissed.

Marcos and Robredo are facing off again in May, this time in the presidential derby.

“Siguro 'yung mensahe na lalabas ay magbantay talaga at magbantay. Siyempre nabiktima na ako nung 2016 kaya medyo maingat na maingat ako diyan. Kahit 'yung honest mistake, kailangan pa ring ayusin. Kayat lahat ay tututukan natin para hindi na magkamali (I think the message is, there is really a need for vigilance. I was already victimized in 2016; that's why I'm very careful regarding that. Even if it's an honest mistake, we need to fix it. That's why we should look at all of those in order to prevent mistakes),” Marcos said.

His running mate, Davao City Mayor Sara Duterte-Carpio, also backed calls for an investigation into the reported pre-shaded ballots in Singapore and Dubai.

Duterte-Carpio, chairman of the Lakas-Christian Muslim Democrats, called on the Comelec to investigate the incident, where her name in the ballots was supposedly pre-shaded.

“That my name was allegedly pre-shaded, along with some senatorial candidates, is grossly disconcerting. As a politician, my experience has taught me that Filipinos do not respect those who cheat and engage in election fraud,” said Duterte-Carpio, daughter of President Rodrigo Duterte.

“I take with great pride in the fact that my history in politics has never been tainted by cheating, fraud, and other election irregularities that could question my integrity and leadership. I never have and will never condone cheating. I won my past elections because the people voted for me,” she added.

On Tuesday, the Philippine embassy in Singapore confirmed that a spoiled ballot was “inadvertently and unintentionally” given to a voter Monday, but added that it was an isolated incident.

It said the ballot came from a voting exercise done on Sunday and that the incident was recorded in the official minutes of voting for automated elections system voting posts.

The Philippine consulate general in Dubai, on the other hand, denied that pre-shaded ballots were given to voters in the United Arab Emirates city.

It called on the public to stop spreading such disinformation online.

The Comelec has refuted claims of some overseas absentee voters that they received pre-shaded ballots, warning those who make such allegations that they can be cited for damaging the integrity of the national elections.

Around 1.7 million Filipino voters are expected to participate in the overseas absentee voting, which will run from April 10 to May 9.

In a statement on Wednesday, the Department of Foreign Affairs (DFA) said there was a “strong turnout” on the first day of the overseas absentee voting in the Philippine Consulate General in Dubai on April 10, with many voters showing up as early as 7 a.m.

Over 1.6 million Filipinos living abroad are expected to cast their votes in Philippine embassies and consulates around the world.

“Many took the opportunity to vote as it was a Sunday, a holiday for most of the Filipinos in Dubai and Northern Emirates,” the consulate reported to the DFA.

The Dubai police was on hand to assist and monitor the crowd outside the consulate, it said.

An additional polling venue will be opened at POLO beginning April 12.

Among those who voted in Abu Dhabi, also in the UAE, was Miss Universe 2015 Pia Wurtzbach.

Wurtzbach revealed that she voted for Robredo.

She also said it was her first time to vote. “May halong excitement and relief that I finally took my stand. Shading that little black dot felt like I was finally making a choice toward our future. I know I'm only 1 person. Only 1 vote out of millions but every vote counts,” she said.

The 32-year-old said that when she learned that only 30 percent of registered voters in UAE were expected to vote, she encouraged other Filipinos living in the emirates to let their voices be heard.

“If you're a Filipino living abroad who's already registered, please make time for it because your vote counts. You have one whole month to do this so there's really no excuse not to. Plus, the process in Abu Dhabi was super seamless,” Wurtzbach said.

Marcos was in Cebu City last Tuesday for the signing of the covenant between the UniTeam and One Cebu, the dominant local party in Cebu province.

In a speech after the signing, he likened One Cebu Party's endorsement of his UniTeam Alliance with Duterte-Carpio as a “seal of good housekeeping.”

Marcos said the One Cebu's support is more than just a political endorsement since it speaks highly of the alliance's values, ideals, and the way it has carried itself during the campaign.

“It is the support that you [One Cebu] have given Inday Sara [Duterte], myself and the UniTeam, which is significant also because it is the, in a sense Cebu has given us the seal of good housekeeping,” Marcos said

He also told Cebu Gov. Gwendolyn Garcia that the UniTeam alliance had been waiting for the party to endorse his candidacy, saying that the endorsement brought him closer to securing the country's top post.