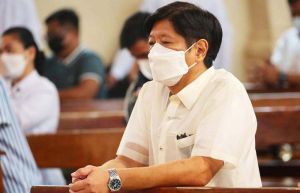 President Ferdinand “Bongbong” Marcos Jr. attends a mass at the San Miguel Parish Church on Friday, July 1, 2022. Also present during the mass were Vice President Sara Duterte-Carpio and several members of the Cabinet under the Marcos administration. OFFICE OF THE PRESIDENT

PRESIDENT Ferdinand “Bongbong” Marcos Jr. has declared vacant all positions in government with presidential appointments “to ensure the continuous and effective delivery of government services.”

“Vacancy in the heads of departments, offices, agencies and bureaus where no replacement has been appointed or designated, shall be filled up by the next-in-rank and most senior official as officer in charge (OIC),” the President said.

The OIC “shall perform the duties and discharge the responsibilities of the office until [July 31, 2022], or until a replacement has been appointed or designated, whichever comes first,” he added.

All non-CESO occupying CES positions in agencies of the executive department shall remain in office and continue to perform their duties and discharge their responsibilities on a hold-over capacity until July 31, 2022 or until their resignations have been accepted and/or their respective replacements have been appointed and/or designated.

The affected contractual and casual employees whose contracts expired on June 30 will continue in service until July 31 unless otherwise earlier terminated or renewed.

They were also directed to turn over “records, documents, books, equipment and other properties of their respective offices to their successors and/or the highest career official in their respective agencies.”

The President's order, which was signed on Thursday, takes effect immediately.

During the campaign, Marcos had said he would fill up the 180,000 available plantilla posts in the government if elected.

He said there are around 600,000 to 700,000 job order workers in the government despite the high number of vacant plantilla positions.

Marcos also said regularization is a major issue not just for the private workers, but also for the state employees “because some of them are only hired through job orders or contracts of service for one reason or another.”

He also pointed out that many government job order workers, especially those in the local government units (LGUs), are only earning around P10,000 per month.

Marcos also said he will propose a law for government workers under job orders or contracts who consistently receive “excellent performance evaluations” for at least three consecutive years to be given the chance to be hired as permanent employees.

He said if job order workers with outstanding performance ratings could even be regularized even if they have no civil service eligibility.