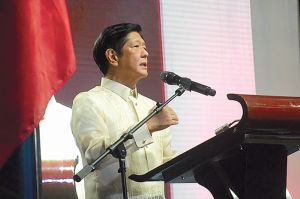 Back in the Palace President Ferdinand Marcos Jr. Photo by Benedict Abaygar

FERDINAND Marcos Jr. will find himself back in Malacañang after he takes his oath as the 17th President of the Republic of the Philippines at noon today, June 30, 2022, 36 years after his father was ousted and forced out of the Palace.

Marcos, 64, better known as Bongbong, takes the rein of power from President Rodrigo Duterte, with a promise to provide the country a unifying leadership.

He will serve as president until 2028.

Marcos, who ran under the Partido Federal ng Pilipinas, obtained 31,629,783 votes in the official tally for the 2022 presidential race.

Having captured Filipinos' hearts with his campaign promise of unity, Marcos faces huge challenges as the country strives to recover from the debilitating effects of the pandemic and the war in Ukraine.

“Tulungan niyo po ako. Mahirap po ang ating kailangang gawin, marami po ang ating kailangang gawin. Ngunit sa tulong ninyo, sa pagkakaisa ninyo, sa ating pangarap na pagandahin ulit ang buhay ng Pilipino … ay magiging totoo 'pag tayo ay nagkaisa (Please help me. What we need to do is difficult, what we need to do will be a lot. But with your help, your unity in my dream of giving Filipinos a better life… we will truly be united),” Marcos said in his recent speech.

Marcos will bank on his long years in politics and the Cabinet that he carefully formed to steer the country to progress.

He expressed confidence that he has put together “a good team” who will help him realize a better and more progressive Philippines.

“I believe we have found a good team, that we can have confidence in, that will bring us together, that will create, and that will formulate and transform… formulate plans to transform the economy to the new global economy. And that's what we all wish for our country,” Marcos said when he visited Cebu City last Tuesday for the oath-taking ceremony and thanksgiving of the One Cebu Party.

To date, he has designated more than 20 individuals to different departments, including the all too important economic cluster headed by incumbent Bangko Sentral ng Pilipinas (BSP) governor Benjamin Diokno who will take the top post at the Department of Finance (DoF).

Interestingly, besides Diokno, other holdovers from the Duterte administration who will be taking on new roles under Marcos' watch are outgoing Labor and Employment chief Silvestre Bello 3rd, former Cabinet secretary Karlo Nograles and Justice Secretary Menardo Guevarra.

Bello is the new chairman and resident representative-designate of the Manila Economic and Cultural Office to be based in Taiwan, while Guevarra takes over from Calida as solicitor general.

Nograles, on the other hand, was renominated as chairman of the Civil Service Commission. He was one of President Rodrigo Duterte's ad-interim appointees bypassed due to lack of quorum by the Commission on Appointments several weeks back.

Marcos will temporarily be the Agriculture secretary.

On Wednesday, Marcos named Calida as chairman of the Commission on Audit and Jose Arnulfo “Wick” Veloso as president and general manager of the Government Service Insurance System.

'We shall rise again'

Marcos, whose slogan is “Together we shall rise again,” has stuck to an evocative message of rekindling the idea of the country's former greatness.

Aside from pushing for unity, Marcos had promised to lower electricity rates, provide sufficient energy supply and reduce rice prices.

The former senator also vowed to continue the Build, Build, Build program of the Duterte administration and prioritize the development of digital infrastructure.

His inauguration will be steeped in tradition. He will take his oath at noon before Chief Justice Alexander Gesmundo at the National Museum in Manila.

After his oath-taking, Marcos will proceed to Malacañang where he is expected to administer the oath of the members of his Cabinet.