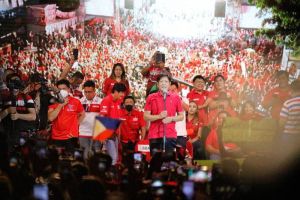 Presidential frontrunner Ferdinand “Bongbong” Marcos Jr. has kept his huge lead in the presidential race, favored by a majority of respondents in this month's Kalye Surveys.

Based on the tabulation conducted nationwide from April 1 to 10 with 3,000 respondents, Marcos was the runaway winner with almost 62 percent preference shares.

At a very distant second was his closest rival, Vice President Maria Leonor “Leni” Robredo, who got 18.4 percent.

SPLAT Communications, the information and statistical data provider that works jointly with consulting firm Simplified Strategic Solutions to produce the Kalye Survey summaries, said that with only 27 days to go before the elections, the game is practically over considering Marcos' 43.6 percent vote lead.

“The UniTeam of BBM and Inday Sara Duterte will be elected with majority preference shares. Their winning margins will go down in history as the most dominant victory in the history of Philippine national elections,” it added.

Based on the same data, SPLAT warned that the remaining 27 days will be difficult for Robredo as her camp will have to race against time to entice more supporters.

“Now it gets much worse for the second-ranked candidate in the remaining 28 days before the elections. Her campaigns need to convert approximately 855,494 voters per day,” it said.

Based on the survey, Robredo trailed Marcos even in the regional cluster that included her supposed bailiwick.

Even if all the undecided in the said regional cluster chose her, the total will still be 13.2 percent less than Marcos' preference shares, it said.

“We entreat our supporters, volunteers and campaigners to refrain from complacency and remain [focused] in achieving our common target of 70-percent presidential preference mark,” Rodriguez said in a statement.

“We shall not rest until the 70-percent preference survey polls position is attained, until every vote is counted and the aspirations of the Filipino people become a reality,” he added.

Marcos said that the endorsement of One Cebu Party brought him closer to securing the country's top post.

One Cebu Party, the dominant local political party in the most vote-rich province of Cebu, on Tuesday announced its support for Marcos.

The former senator, during the signing of the alliance agreement between the UniTeam and One Cebu Party, thanked Cebu Gov. Gwendolyn Garcia and the rest of the party for their support.

This declaration completes One Cebu's endorsement for the UniTeam tandem of Marcos and his running mate Davao City Mayor Sara Duterte-Carpio.

“If you remember one event few months ago I teased you nandito kaming dalawa ni (I was here with) Inday Sara and I remember I said, 'Hindi kami aalis dito hanggang narinig na natin ang iyong matamis na oo (We're not leaving here until we hear you say yes),” Marcos said.

Marcos announced that part of his priority program is environment protection and preservation.

“Nature has its rights that should be protected. It should be allowed to flourish, reproduce and attain its abundance side by side with human civilization in perfect balance and harmony with our growing communities,” he said.

“We should do this if we want to safeguard the most vulnerable members of our society from the onslaught of natural calamities.” Among his programs is to create the Department of Disaster Resilience.

He added that promoting reforestation and pushing for stricter anti-illegal logging law will also be prioritized by his administration.

In mining, Marcos said he will implement a collaborative relationship with all stakeholders to make sure that it will not be abused and it will bolster economic recovery.

He also plans to create the Department of Water and Resource1s Management to make sure that clean and potable water is available to all.

Marcos added he will also focus on solid waste management including “waste to energy programs.”