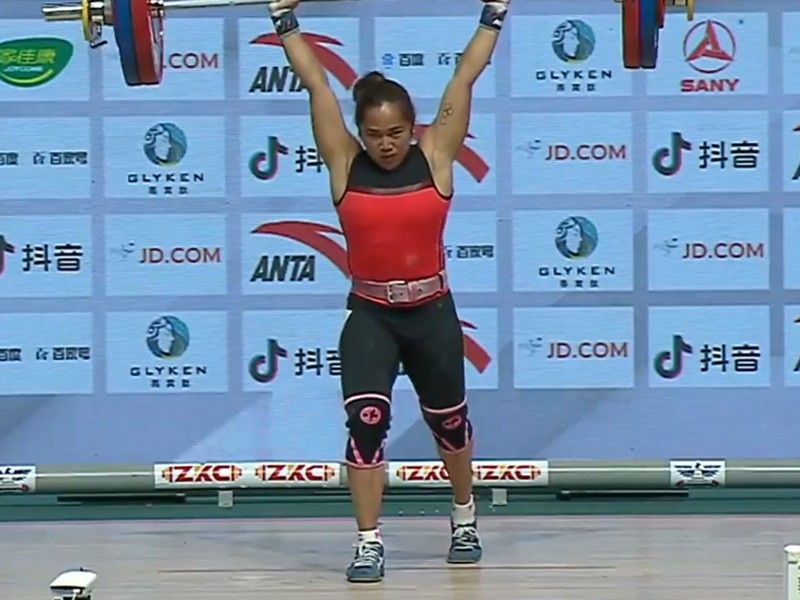 (Editor's note: This article was originally published on April 18, 2021 on thefilipinoconnection.net and is used with permission from the website.)

MANILA, Philippines – Hidilyn Diaz formalized her entry to this July’s Summer Olympic Games in Tokyo, but her competition in the 55kg weight class just got tougher.

Diaz missed the three sets of medals offered in the said weight class at the 2021 Asian Weightlifting Championships in Tashkent, Uzbekistan. The women’s 55kg category is expected to have a Chinese, now two-time Asian Champion Liao Qiuyun, as a runaway gold medalist in Tokyo.

Diaz placed fourth in the snatch (94kg), then hoisted 118kg in the clean and jerk to tie Kazakh lifter Zulfiya Chinshanlo. But the lady Kazakh bet won the bronze medal and Diaz placed fourth.

The five ladies are the world’s best lifters in this category, although Liao Qiuyun is said to be the Chinese representative to Tokyo.

Nabieva’s bronze in the overall count was courtesy of her personal best of 99kg in the snatch. Diaz missed her first snatch at 90 kg before nailing 90 and 94kg in her final two attempts.

The clean and jerk, however, was where Diaz bounced back. But Chinshanlo also lifted 118kg in her first attempt like Diaz. The Kazakh then missed 122kg in her second lift, the same with Diaz missing her second lift at 121kg.

Both Chinshanlo and Diaz missed their final clean and jerk attempt at 122kg. The Kazakh won the bronze by virtue of trying a heavier weight in her second attempt.

The Chinese’s performance in these ongoing championships seeks to reassert the country’s dominance after China and eight other countries got suspended for a year by the International Weightlifting Federation (IWF). Drug tests of results from the 2008 and 2012 Olympic Games were re-analyzed, and lifters from these countries returned at least three positive drug sample results.

Unlike the continental and the IWF World Championships where a total of nine medals are offered per weight class, the Olympic Games will put only three medals up for grabs.

Diaz won her silver medal at the 2016 Rio Olympic Games in the former 53kg weight class.

(When Diaz won the gold medal at the 2018 Asian Games in Jakarta, on August 21 to be exact, it was at the 53kg class. The IWF’s new weight categories came some two months after.)

But at the 2019 Asian Championships in Ningbo, China, Diaz came back to win three silver medals in the snatch (94kg), clean and jerk (115kg) and overall (209kg). Liao Qiuyun was the runaway winner with a 224kg total.

'Threats' to Diaz in Tokyo

But the performances of the two Central Asian lifters in Tashkent could pose threats to Diaz in Tokyo.

Chinshanlo’s 118kg lift in the clean and jerk was her personal best, but Diaz had lifted her heaviest of 120kg when she won the 55kg class at the 2019 Southeast Asian Games in Manila.

And just before the COVID-19 pandemic was declared, at the 2020 IWF Roma World Cup (a tournament that offered points for Olympic qualification), Diaz easily won the gold with a 212kg total, including a 119kg clean and jerk lift.

In Tashkent, Diaz made up for a bad start in the snatch by hoisting 90kg in her second attempt and 94kg in her third. But Nabvieva lifted 95kg on her first lift and boldly hoisted 99kg on her second (the Uzbek missed 102kg on her final attempt.)

Diaz and Chinshanlo both hoisted 118kg in their first clean and jerk attempts. Diaz then took a one-second pause to place the bar on her chest in her second attempt, but she can’t complete the 121kg lift as she slipped towards the front.

Chinshanlo tried 122kg on her second and third attempts but failed. Diaz also failed at 122kg on her final lift.

While Liao Qiuyun will expectedly be the runaway favorite to win the gold in Tokyo, Diaz will have her hands full against Nabieva and Chinshanlo if she wants to land a second-straight Olympic silver medal.