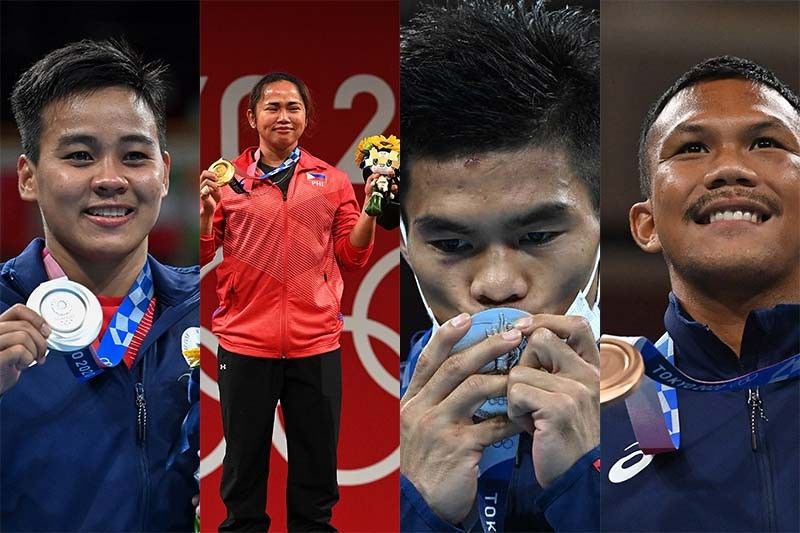 TOKYO – Carlo Paalam hit the canvas in the first round on a four-blow salvo by Great Britain’s Galal Yafai – and going down with the fall was the country’s bid for a two-gold finish in the XXXII Olympiad.

Paalam fell short in his fightback from the knockdown, thus, seeing his Tokyo Games Cinderella run end in a silver-medal feat.

Yuka Saso also had a chase that went short of the target at the Kasumigaseki Country Club in Saitama, but salvaged a Top 10 finish in the Olympic women’s golf ruled by American Nelly Korda.

Team Philippines missed a double gold but is nonetheless breaking camp here soaring high with a great, great breakthrough highlighted by a historic first gold on top of two silvers and one bronze.

It was mission accomplished right on Day 4 when Hidilyn Diaz ended the country’s 97-year wait for an Olympic gold medal with her lift for the ages in the weightlifting hall.

And it seemed to open the floodgates for a stream of victories from the Philippine camp and later a medal rush from a four-strong boxing team on its own breakthrough in these Games.

Nesthy Petecio narrowly missed the gold in female featherweight and Eumir Marcial took the bronze in men’s middleweight before Paalam made his final act that ended in a runner-up finish to a British flyweight bomber.

Petecio, Paalam and Marcial combined for two silvers and one bronze, nearly matching a total of two silvers and three bronzes the country produced in five Olympic editions.

Jose Villanueva delivered the very first medal – a bronze – in 1932 in Los Angeles then son Anthony struck with the very first silver in Tokyo in 1964. Leopoldo Serrantes and Rhoel Velasco had their own bronze feats in 1988 (Seoul) and 1992 (Barcelona) before Onyok Velasco annexed the second silver in 1996 (Atlanta).

Association of Boxing Alliances in the Philippines President Ricky Vargas praised all four Filipino boxers in Tokyo, including women’s flyweight Irish Magno, for their accomplishment.

“Without your support, we could have not achieved this level of performance. Sana nandyan pa kayo in the future,” Vargas added.

A fifth medal escaped on a misstep from a landing by Caloy Yulo in men’s vault final, with the young Pinoy ending up fourth.

And another medal hope faded away as pole-vaulter EJ Obiena failed to clear 5.80m in the finale over at the Japan National Stadium.

Overall, it’s an exhilarating ride for Team Philippines in this most unusual edition of the Summer Games.

Diaz, Petecio, Paalam and Marcial sparkled with their podium finishes for which they’re to bank windfalls from the government and the private sector. Diaz is guaranteed at least P35 million, Petecio and Paalam at least P18 million each and Marcial P10 million.

Paalam missed out on a bid to join Diaz in the zenith of glory on his sorry loss to Yafai.

A four-punch combo Yafai capped with a textbook right jab-left straight finisher floored Paalam with one minute and 48 seconds remaining in the first round.

Although Paalam survived the round, he boxed dazed from the knockdown and allowed Yafai to pile up points while forcing the Cagayan de Oro City bet to play catch-up.

Paalam got his wind back in the second round, but Yafai was still quick with his jabs and solid with his left straights to keep the Filipino at bay. All but one judge, from Peru, gave the second round to the British fighter, who at 28 packed more experience over the 23-year-old Paalam.

Paalam went for the big punch in the third round but to no avail. Yafai simply kept his distance and danced away each time Paalam went for a knockout.

At the Kasumigaseki east course, from way behind the leaderboard after a three-over 74 in the first round, Saso zoomed to a ninth-place windup with a rally highlighted by a fiery closing round marked by an eagle and four birdies in the last seven holes.

At 274, the reigning US Women’s Open champ ended seven shots off Korda who bagged the gold with a final-round 69 for a 17-under 267 total.

Bianca Pagdanganan failed to recover from back-to-back 71s, soaring to 74 for joint 43rd at 285.