Share
Edmonton·New
Nearly 10 months after Alberta's first presumptive COVID-19 case was confirmed, mothers across the province are giving birth to what some have dubbed "the coronial generation."

Pregnancy during the pandemic has been emotionally and physically exhausting, says Edmonton woman 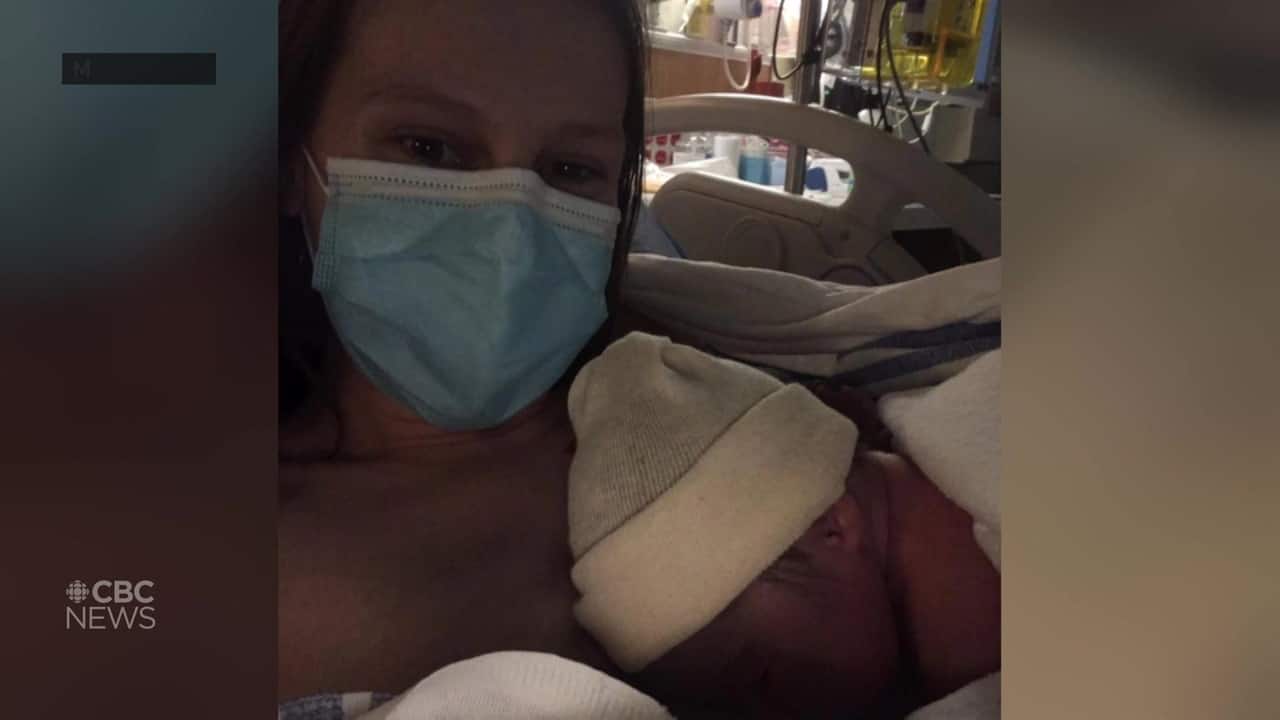 Nearly 10 months after Alberta's first presumptive COVID-19 case was confirmed, mothers across the province are giving birth to what some have dubbed generation coronial.1:46

Kennedy Amyotte's first-born child will open her eyes to the world and see her mother's face behind a mask.

Due Jan. 13, she will experience many of her firsts amid the isolation and uncertainty of COVID-19.

There will be no crush of friends and relatives in the hospital, no visit from grandma, no baby shower.

Nearly 10 months after Alberta's first presumptive COVID-19 case was confirmed, mothers across the province are giving birth to what some have dubbed the coronial generation.

For Amyotte, pregnancy during the isolation of the pandemic has been emotionally and physically exhausting. She spent weeks in quarantine following a COVID-19 diagnosis last month and wonders how she and her husband, Shane Flamond, will navigate parenthood in the uncertain months ahead.

Amyotte expects to tell her daughter about it someday, years down the road.

"I'll tell her exactly how it is," she said. "It was a very lonely and isolating time to bring you into the world."

Amyotte's daughter will be among the first in a wave of children conceived during the pandemic, and born just as the province shuts down again amid escalating caseloads.

"I'm actually really thankful that she's not going to have a memory of this," Amyotte, 30, said from her Edmonton home.

"I'm hoping that by the time her infancy is over and she goes into the toddler years, that this will be kind of a distant memory for us."

As restrictions forced people to hunker down at home, there was conjecture over the prospect of a pandemic baby boom.

Expectant parents made their announcements with garlands fashioned of toilet paper, #madeinquarantine hashtags and quips about the pitfalls of ignoring social distancing.

But demographers say COVID-19 is more likely to discourage people from having children, as families struggle with the financial and social implications of a prolonged health crisis.

The increased intimacy of lockdown measures has come with added caution about the future and new anxieties about the prospect of raising a child.

"Some have proposed that spending more time at home would increase births, but mostly that uncertainty is expected to reduce births," said Roderic Beaujot, an expert in demographics and emeritus professor of sociology at the University of Western Ontario.

"They feel uncertain about the future. They're concerned and anxious, which would mean that they do not see it as a good situation in which to have a child, if it's not already on its way."

Beaujot suspects there will be a baby boom when the pandemic truly resolves, much like what was seen following the end of the Second World War.

But he said some people who have postponed having a baby during the pandemic may decide to never pursue a pregnancy.

"That's a difficult question and a rather important one," he said.

Amyotte found out she was pregnant in April as the provincial caseload surged past 1,000 active cases.

"I mean, in hindsight, you probably wouldn't do it again," she said with a laugh.

"We were really, really hoping that things would have been settled down by now.

"When you first start trying to get pregnant, you're obviously just so excited about the aspect of conceiving the baby and actually getting to that point. And then everything in between those two points of actually being pregnant and having the baby, things have been very, very strange and kind of surreal." 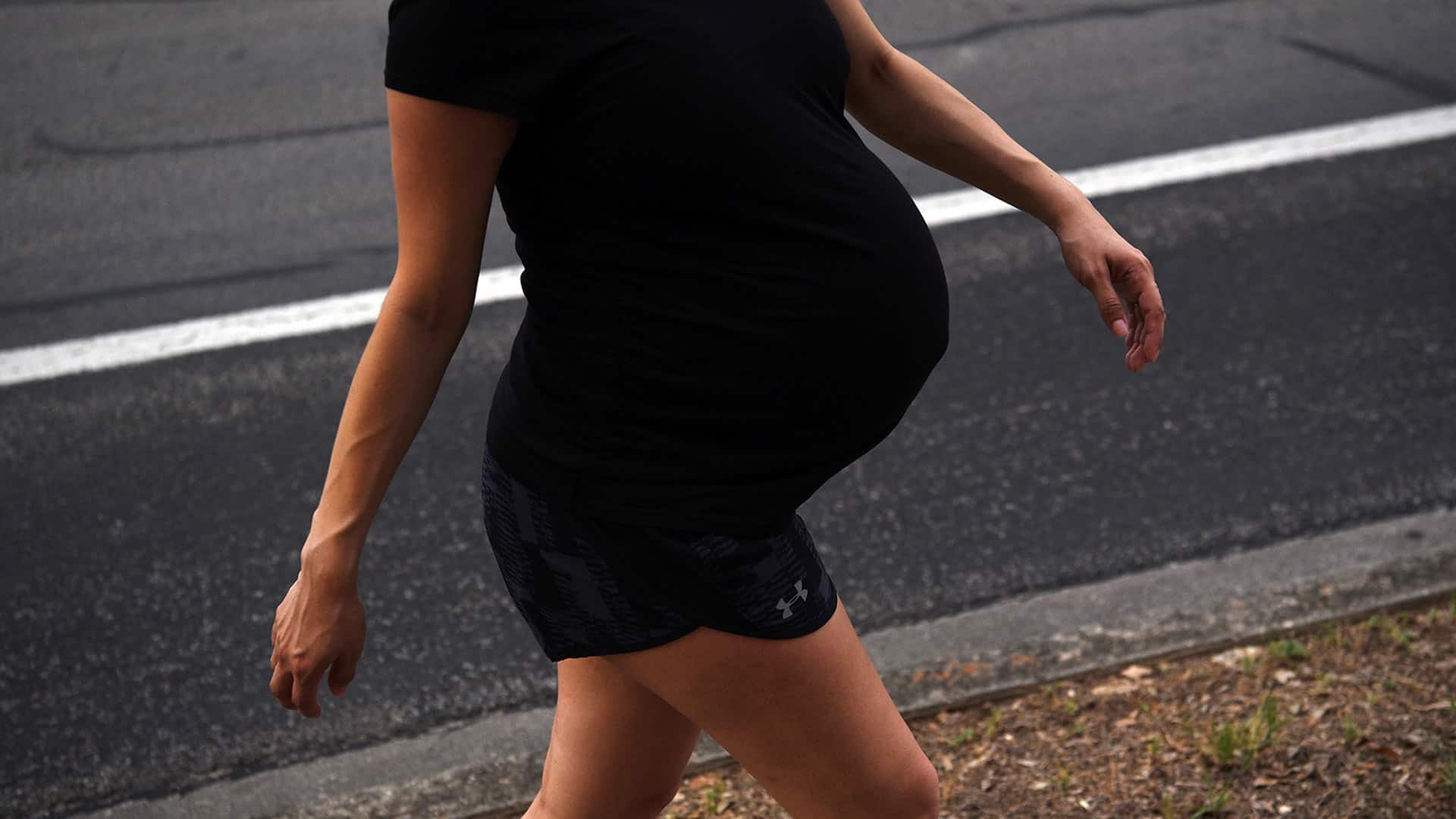 The COVID-19 vaccines are not recommended for pregnant women, because initial clinical trials did not include pregnant women. However, for some front-line workers, the vaccine benefits may outweigh the unknown risks.1:57

A physiotherapist, Amyotte was laid off from her job for eight weeks. She returned home from work again in late November when she tested positive for COVID-19 at 34 weeks. She developed only mild symptoms but often feels exhausted and out of breath.

She has been assured by doctors that her daughter will be fine but she still worries about long-term effects as she prepares for an uncertain labour.

She doesn't know if Shane will be allowed into the delivery room. He has been unable to attend any medical appointments and watched her ultrasounds over the phone from the clinic parking lot.

"It's just a very, very different experience, which was kind of heartbreaking going through it," Amyotte said.

"How do we contend with those challenges, not only just being a new parent on our own, but how do we best help our child to develop normally when the circumstances aren't normal anymore?"

Melanie Sajtovich learned she was pregnant in April shortly after she and her husband, Alex Baraoniciu, moved to Edmonton for work.

She had been at home with her two-year-old son Sebastian for most of her pregnancy, far from her friends and family in Ontario.

"It was really scary finding out that I was pregnant," Sajtovich said. "It was still pretty early but it was still at the stage when things like hospitals were overwhelmed and overrun.

"With the second wave, I feel like I have even more anxiety than I had."

She has been struggling with loneliness. She didn't have prenatal classes and doesn't expect her parents to be able to visit the new baby.

"It's been really tough," she said. "The only thing keeping me from falling apart most times is knowing I'm not even close to the only mom going through this right now."

Grieving the loss of normalcy

Dr. Amber Whitford, an obstetrician and gynecologist in Red Deer, said Amyotte and Sajtovich are some of the many new parents struggling with the pandemic.

Many are grieving a loss of normalcy, especially after their baby comes home, Whitford said.

"Certainly our moms are a vulnerable population."

Whitford said clinics like hers are doing all they can to help new parents, moving services online, but many of the normal family supports have been dismantled by the pandemic.

It's important, she said, that new parents seek support and remember the importance of self-care.

"It's not really the hospital stay. It's the postpartum isolation I think our moms are going to find the hardest."

As for the prospect of a post-pandemic baby boom, Whitford said it's certainly on the minds of those working to welcome new Albertans into the world.

"I don't know if we know, really, which way it's going to swing," she said.

"We make a lot of jokes that there'll be a lot of first babies born through this but maybe not a lot of subsequent second and third babies."

Share
Previous Long road ahead, but pro-admin bets lead in early poll for 2022 elections
Next Lee Jin-wook: Sweet Home is about being ‘grateful to be alive’