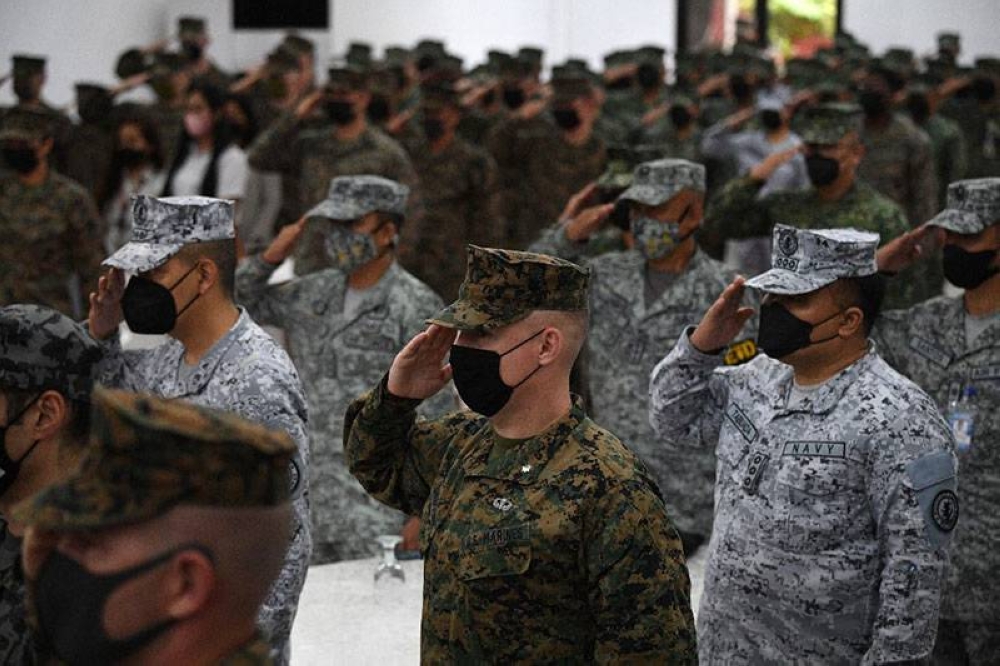 Philippine and United States Marines salute while their national anthems are played during the opening ceremony of the ‘Kamandag’ joint military exercise at the Philippine Marines’ headquarters in Taguig City on Oct. 3, 2022. AFP PHOTO

THE United States appears to be fortifying its alliances in the Indo-Pacific region as tension simmers in the South China Sea, Taiwan Strait and the Sea of Japan.

Several days ago, the US and South Korea fired a volley of missiles into the Sea of Japan in response to what Washington describes as North Korea's “dangerous and reckless” test-firing of a missile capable of hitting US military bases in Guam.

The US has also reiterated its promise to defend Taiwan against an attack by China, ramping up the sale of military hardware to the island nation.

And earlier this week, US and Philippine Marines held joint combat drills in Palawan and Luzon to improve “interoperability” in times of conflict.

The drills were carried out days after American and Philippine defense officials met in Hawaii to discuss how to fine-tune the Mutual Defense Treaty (MDT) to make it more responsive to the shifting political winds in the Indo-Pacific region.

Signed on Aug. 30, 1951, the treaty stipulates that one nation must come to the other's aid if one is attacked by a foreign aggressor.

The MDT has been one of the pillars of the relationship between the longtime allies. But lately there have been calls for the Philippine government to take a hard look at the pact to find out its relevance to the country's security.

The MDT was conceived during the Cold War, when the “Free World” and the “Iron Curtain” were locked in a fierce brinkmanship contest. The lines of confrontation were clearly drawn; a country is either an ally or an enemy.

The US took the Philippines under its wing to protect it from the clutches of “communist domination” in Southeast Asia.

Seven decades later, the political landscape has vastly changed. The line between ally and enemy has blurred.

China, once pictured as the communist menace in Asia, has become the epitome of benevolence, winning over its neighbors with offerings of economic windfall.

Rodrigo Duterte welcomed the Chinese overtures like no other Philippine president did, and turned his back on the US.

Under the Duterte doctrine, a war with China would be unwinnable for the Philippines, so there is no point holding on to military commitments with America.

Washington had to do some fancy maneuvering to prevent the Philippines from fully drifting to Beijing's side. It also helped that Duterte's successor, Ferdinand Marcos Jr., had announced that under his administration, the Philippines would be a “friend to all, an enemy to none.”

Washington jumped on the policy swing to rebuild its security ties with Manila. And it begins with a serious assessment of the MDT.

As early as last year, the defense secretary, Delfin Lorenzana, pushed for “a comprehensive review of our alliance, taking stock of the pros and cons of the MDT and what happened in the past 70 years.”

Lorenzana pretty well summed up what is basically wrong with the treaty.

“The Philippines got hand-me-down equipment” still in the US inventory from World War 2 and Vietnam, he said.

Increased cooperation between the two nations' coast guards is a myth, Lorenzana said, because “we do not have [the ships] to operate seamlessly with other friendly nations.”

He said the Philippines needs more advanced weapons systems to build up its “minimum deterrence” capability against threats, lamenting that the US provides even non-treaty allies billions in military aid.

He acknowledges that MDT “has been beneficial to the Philippines, but not enough to make it stand on its own feet. We cannot be forever relying on others for our security.”

Sen. Robinhood Padilla echoed Lorenzana's concern about the Philippines' over-reliance on the US for military assistance. Padilla said such a dependence creates a sense of bravado among the people, when the country is just a “fly perched on top of a carabao.”

It's true the MDT needs a lot of work. But we must make sure that this time the Philippines does not get the short end of the stick.

It is a “mutual” treaty, after all. Meaning, everybody benefits from it.