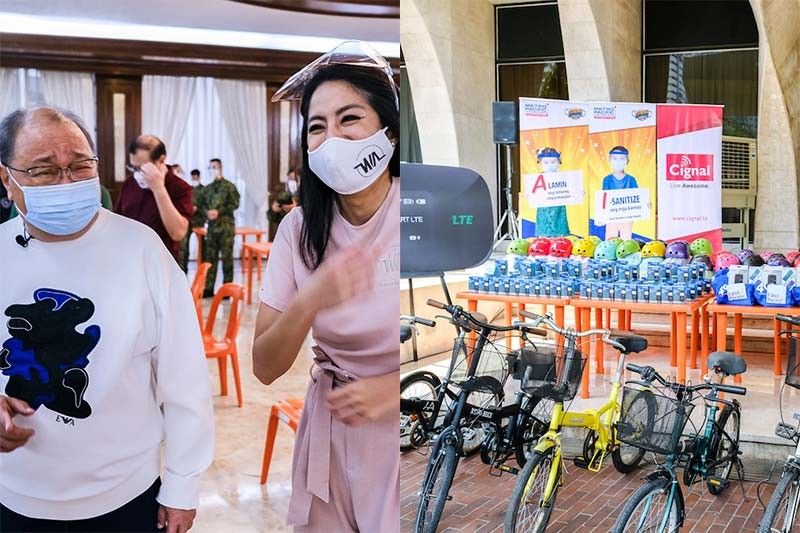 Working with former Ateneo volleyball star and television presenter Gretchen Ho, Pangilinan provided some 500 bicycles to beneficiaries of Ho's Donate A Bike, Save A Job.

The organization looks to provide bicycles for essential workers in order to get to their workplace safely amid the health crisis.

"You know, our family had no means when I was young so I never had a bike," Pangilinan narrated.

"I could see that the biking project was something that could help the livelihood of our people. At the end of the day, the best solution to poverty is livelihood," he added.

Ho, meanwhile, was pleasantly surprised with Pangilinan's contribution to her efforts that were able to provide more than a thousand bicycles to those most affected by the pandemic.

"I was really surprised when Sir Manny messaged me on Facebook wanting to donate, after watching my story on the rollerblader that we gave a bike to," said Ho.

"I was just finishing off donations from last year but welcome to Donate A Bike, Save A Job Season 2," she quipped.

Apart from the donations, Pangilinan's group of companies also pledged to support bike-friendly initiatives such as bike parking, among others.

This in order to encourage their own employees to bike to work.

Pangilinan's donation will kick-start "Bike for Livelihood," which will be working with different local government units to identify those who need it the most.

Pasig City will be the first to benefit from the project, followed by Manila, Quezon City, Malabon, Caloocan, and Batangas.

Bikes have already been given to Pasig City 4Ps recipients and the city's bike lane enforcers.

Fifty bikes were also given to the DILG-PNP Contact Tracers last Sunday.