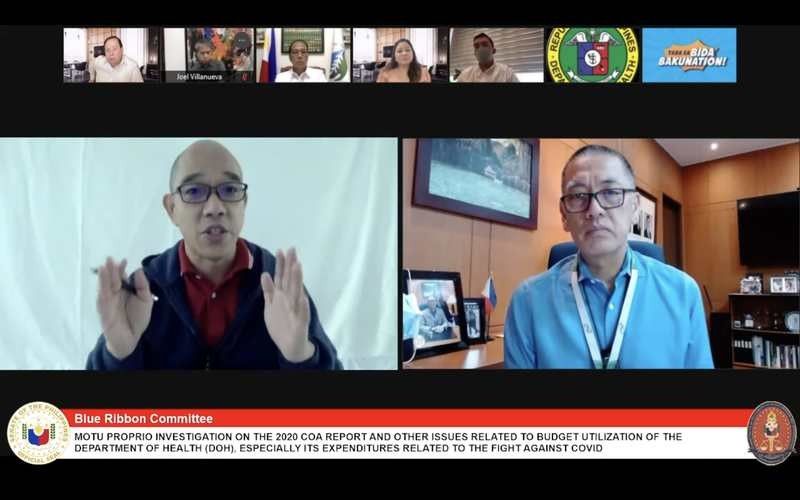 MANILA, Philippines — EMS Components Assembly, a local electronics assembly firm, says it invested P200 million last year to purchase raw materials and repurpose its facilities for the production of surgical face masks at the urging of the Department of Trade and Industry.

It was patriotism that eventually drove the firm to shift to mask production at the onset of the pandemic, EMS chairman and CEO Ferdinand "Perry" Ferrer told senators at a Blue Ribbon Committee hearing on "deficiencies" in pandemic spending flagged by state auditors.

"I believe[d it was] our duty as a Filipino company because it [was] the government who requested [that we produce face masks]," he said.

On April 27, 2020, the Department of Budget and Management awarded EMS a contract to produce 100 million face masks for P13.5 apiece— half the price of P27.72 paid to the controversial Pharmally Pharmaceutical Corp. that bagged the largest pandemic contracts with the government.

But EMS' deliveries were "pushed out and delayed" by the DBM's procurement service, Ferrer told senators.

In addition to this, although the company managed to produce the 100 million face maks, only 25% of them would be purchased by the government at the initially agreed-upon price.

"Per contract with PS-DBM, our shipments would have started in June at 8.5 million [masks] per month," Ferrer told senators. "[W]e were [allowed] to ship only 5.3 million [masks] in June and the balance was delayed."

Ferrer said they were not given the authority by DBM to make the full shipment because government warehouses were supposedly full.

The balance, some 74.1 million masks, was later fulfilled by EMS for the price of P2.35 per unit after the firm was told by the government to match the lowest market price at the time.

The local firm was supposed to make P1.3 billion from the contract. Its total sales were less than half that at P523 million, according to Ferrer.

Former PS-DBM officer-in-charge Lloyd Christopher Lao noted that there was a prior agreement with EMS to match market prices for face masks if they dropped. He also said that EMS was the only firm delivering medical-grade surgical face maks to the PS-DBM from June to September.

But prior to June, he noted, PS-DBM had to stockpile face maks from other companies because it needed to give EMS some three months leeway to manufacture the items.

"We had a problem [in October] when the Department of Health had a price freeze at P9," Lao said.

"Our real problem was PPE sets were coming….and there was nowhere to put it. That's our biggest problem," he said in Filipino. "You can look at our office, it's not that big."

However, when he was first asked at a previous hearing about the P27.72 face masks and P120 face shields purchased by DBM from Pharmally, Lao said he could not explain why the prices were that high.

"The fact remains that you bought face masks at P27 and you allowed EMS to [sell] at P13.50 and the fact is clearly shown that EMS was not [allowed] to deliver everything and Pharmally at P27 was able to deliver everything," Sen. Richard Gordon, Blue Ribbon chairman, told Lao.

Local manufacturer told: 'You were cheated'

Senators were up in arms over the government's treatment of the local manufacturer.

"You were cheated. You won [the contract] but you were given a hard time," Gordon told Ferrer.

(It seems like you and other corporations were recruited and then, eventually, you were hired. [But] your P13.50 became P2.35. You really lost.)

Gordon contrasted EMS' experience with PS-DBM to Pharmally's which he noted seemed to have a much easier time dealing with the government.

While EMS was awarded only one contract, Pharmally bagged several contracts worth a total of P8.68 billion with PS-DBM in 2020 despite its recent incorporation in 2019 with a paid-up capital of just P625,000.

Sen. Risa Hontiveros last week bared that a number of Pharmally's executives are wanted in Taiwan for alleged financial crimes. They have also been linked to the Duterte administration, even meeting with President Rodrigo Duterte himself in Davao City in 2017 along with then-presidential economic adviser Michael Yang.

Yang, in turn, has ignored summonses from the Senate and has been cited in contempt for doing so. The chamber also plans to issue a warrant for Yang's arrest to compel him to attend the next installment of the Blue Ribbon hearing.