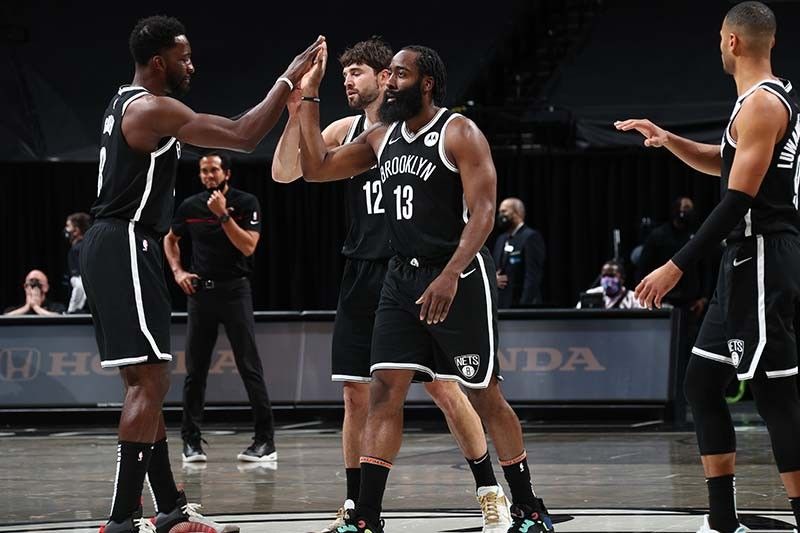 MANILA, Philippines — The Brooklyn Nets barged back into the win column after frustrating the Miami Heat, 128-124, as the NBA season continued on Saturday (Sunday, Manila time).

Fresh from back-to-back losses against the Cleveland Cavaliers, the Nets booked their first win with the trio of Kevin Durant, James Harden and Kyrie Irving.

The troika combined for the 71 of the Nets' 123 points to propel Brooklyn past Bam Adebayo's career-high outing of 41 points in the losing effort for the Heat.

The Nets had to fight back a determined Miami Heat side who outscored them, 42-30 in the final frame.

But time simply ran out for the Heat to complete the comeback and eventually fell to the Steve Nash-led squad.

Harden sank two clutch free throws to extend the Nets' lead to four, 128-124 to effectively close the door on the Heat.

The Brooklyn Nets improve their record to 10-8.

Meanwhile, the 76ers continued to strengthen their hold on the top spot in the Eastern Conference after a 114-110 victory over the Detroit Pistons.

Joel Embiid continues to post MVP-like numbers with 33 points and 14 rebounds in the win.

Ben Simmons flirted with the triple-double with 20 markers, seven assists, and nine rebounds.

The Sixers have now won three in a row and continue to assert their dominance in the East.

For their part, the Minnesota Timberwolves put a stop to a four-game losing skid after beating the New Orleans Pelicans, 120-110.

Big man Naz Reid led the way in scoring with his 20 markers while the 2020 No. 1 overall draft pick Anthony Edwards chipped in with 18.