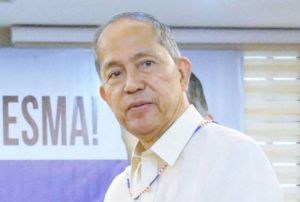 UNDERSERVED workers, particularly in far flung areas, will be on top of the priority of the Department of Labor and Employment (DoLE) under the Marcos administration.

New Labor Secretary Bienvenido Laguesma made the assurance after he formally took over the helm of leadership from former Labor secretary Silvestre Bello 3rd over the week.

Laguesma vowed to make the Labor department a “more responsible and responsive institution that reaches out to needy workers, especially those in rural and far-urban areas.”

“I would like to see DoLE become more conscientious and committed to delivering services, especially to those with limited knowledge and access to DoLE,” said the new Labor chief during the turnover ceremony of the agency's stewardship held at the Labor Governance and Learning Center, Blas F. Ople Hall, Intramuros, Manila.

Laguesma received the DoLE flag and transition documents from Bello, symbolizing the former's acceptance of the duties and responsibilities of being the Labor department's steward for the next six years.

Bello welcomed the new Labor secretary and expressed his confidence that DoLE is in good hands under Laguesma's competent and honorable leadership.

“You are warmly welcome into the department that you had faithfully served for over 25 years. Your fresh mandate to steer the DoLE once more signifies the continuity of the noble initiatives that we have undertaken for the Filipino workers and the people,” Bello added.

Bello also urged the support and cooperation of all partners and allies to ensure continuity of service to DoLE's clientele under the new administration.

Laguesma started his public service career as a mediator-arbiter at the Office of the Secretary-Department of Labor (now DoLE) in 1976. Since then, he had held several executive positions in the department, such as administrator, executive director and undersecretary. He was also appointed Labor secretary during the Estrada administration.

Likewise, Secretary Manuel Bonoan has also assumed his position as head of the Department of Public Works and Highways (DPWH). He succeeded Acting Secretary Roger Mercado.

Like Laguesma, Bonoan's appointment to DPWH is also a homecoming of sorts.

He has an extensive career as a public servant that started at DPWH as early as 1967, spanning four decades until his retirement in 2010 as senior undersecretary.

“Let us work together, let us continue working as a team,” Bonoan told DPWH officials.