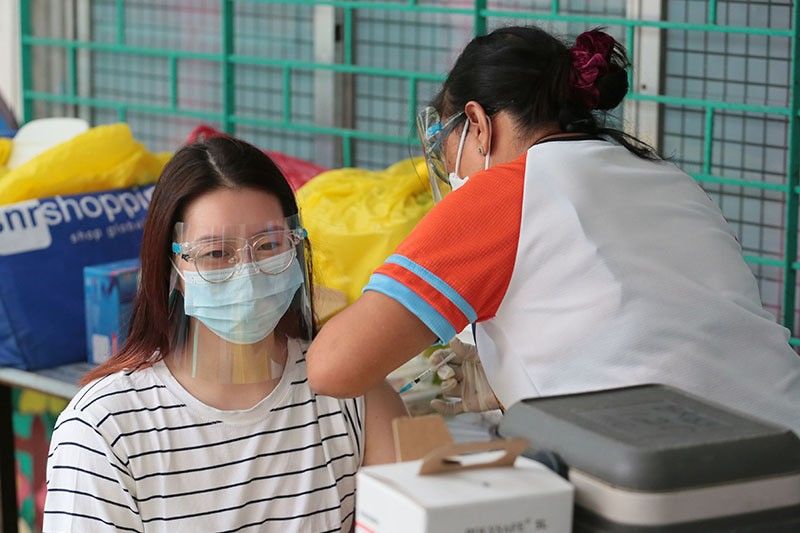 MANILA, Philippines — President Rodrigo Duterte's quip about vaccinating the hesitant in their sleep was just a joke, the Palace said Thursday, adding that it was meant to lighten the mood during a meeting on the pandemic.

Presidential spokesperson Harry Roque also said that there have been no moves to make vaccination against COVID-19 mandatory for government employees or for the general population.

"Joke lang po iyon, kayo naman 'no," he said at a Palace briefing when asked about Duterte's suggestion to have vaccinators climb into people's houses to inject them with the vaccine against COVID-19.

Duterte urges Filipinos to get vaccinated vs COVID-19, hints gov’t can require jabs

FACT CHECK: COVID-19 is real; vaccination not mandatory in Philippines

Duterte made the comment in a meeting on Monday that was aired Tuesday morning, saying vaccinating people while they slept would solve hesitancy. The president has been urging people to get vaccinated against the coronavirus but also acknowledged that some Filipinos are hesitant to get the jabs.

The Department of Health had noted a decline in trust in vaccines in 2019, partly because of the controversy surrounding the Dengvaxia vaccine against dengue.

(Of course, we have such long meetings during the Talk to the People, you only see part of it. Those are long meetings. So we don't get sleepy, you need a few jokes.)

Duterte late last month said Filipinos should get vaccinated, adding that the government can require it because "under the police power of the state, everybody can be compelled to get vaccinated."

He also said during the September 27 meeting with pandemic task force officials that state workers who refuse to be vaccinated should leave government service.

"You are a carrier and a danger to society," he also said of people refusing vaccination.

RELATED:LGUs can require vaccination vs COVID-19 even without national law — Guevarra

Roque, asked in September about the president's comments, said: "I guess the president will start requiring mandatory vaccination among those working in the government."

The government can require vaccinations and has done so in the past, but doing that will require legislation.

Asked on Thursday whether any directive had been issued to government employees to get vaccinated, Roque said there have been "none." Asked if an executive order would be issued to make vaccination mandatory in the Philippines, he replied: "Wala pa (None yet)."

Rep. Elpidio Barzaga (Cavite, 4th District) filed a bill in April for a "comprehensive, mandatory, and sustainable and sustainable immunization program for COVID-19 for all persons as may be determined by the Department of Health." The proposal is still with the House Committee on Health, according to the chamber's legislative information system.

The Senate website does not list a counterpart measure to require people to get vaccinated. — Jonathan de Santos with Xave Gregorio