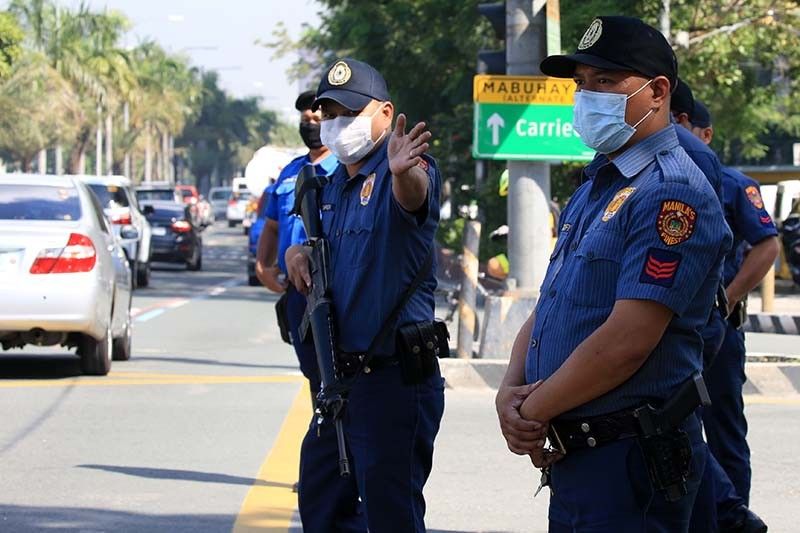 MANILA, Philippines — In the wake of the shooting of a civilian by a village watchman, a lawmaker Tuesday said that only police personnel should be allowed to carry firearms amid the strict enhanced community quarantine in Metro Manila.

This comes after the Manila Police District reported that authorities nabbed Cesar Panlaqui for the shooting of Eduardo Geñoga, reportedly a scavenger, who was found dead with a gunshot to the body along Tayuman street.

In a statement, Rep. Ruffy Biazon (Muntinlupa) said non-police personnel acting as force multipliers should not be allowed to carry guns during lockdowns as they lack training on proper firearm use.

“Enforcement multipliers like barangay tanods are not fully trained on proper firearms use and discipline, so in order to avoid incidents like these, carrying of firearms by non-police personnel even if licensed, should not be allowed during imposition of quarantine,” he said.

“Pandemic control measures mean dealing with the general population, not criminals. There is a strong likelihood that there will be a violation of curfew, mask-wearing, and other pandemic measures by citizens, but these do not require the use of deadly force."

The police organization has been clear in its stance to support force multipliers, or third-party civilians from the private sector tasked with assisting police enforcement. The PNP earlier backed President Rodrigo Duterte's calls to arm civilians volunteering against crime.

Barangay tanods, private security guard, and other enforcement personnel outside of the PNP are among the "force multipliers" tapped to assist in the implementation of quarantine rules in Metro Manila and other parts of the country.

Data from the PNP showed that between Friday — the first day of ECQ in the capital region — and 4 a.m. on Saturday, police apprehended, fined, and warned 20,511 citizens for violations of public health and safety guidelines in the so-called NCR Plus bubble.

The lawmaker added that regardless of the outcome of the investigation, “it is strongly recommended to adopt and enforce a policy to take an inventory of who among those given assignments in the enforcement of pandemic control measures are licensed to own, possess, and carry firearms.”

“This will enable accountability to be immediately ascertained,” he said.

In a separate statement, the Philippine National Police assured a thorough investigation into the fatal shooting of a man who was reportedly suffering from mental illness in Manila over the weekend.

Based on the initial report from MPD, Panlaqui gunned down victim Eduardo Geñoga, who was allegedly making noise during curfew hours in Tondo.

Police Gen. Guillermo Eleazar, PNP chief, said Panlaqui was already in the custody of the Manila Police District with formal charges already on the way.

The PNP chief also ordered police commanders to make sure that no barangay tanods would be allowed to carry guns especially in the enforcement of the quarantine rules.

"Our police are also preparing the appropriate cases to hold the barangay tanod responsible for killing one of our compatriots," Eleazar said in Filipino.

"Among the things to be investigated is why this barangay tanod has a gun and whether it is registered. If the investigation shows that the gun confiscated from Panlaqui is not registered, he will face additional charges of illegal possession of firearm," he added.

Not the first time

Abuse and other human rights violations by cops enforcing quarantine rules has been well-documented over the coronavirus-induced community quarantines, many of which were denied by police and ultimately went unsolved.

RELATED:'By the book': A look at quarantine incidents and police operational procedures

In April 2020, Quezon City police manning a quarantine checkpoint shot to death Winston Ragos. A year later, Darren Manaog Peñaredondo, an alleged quarantine violator in Cavite, died after being force to do 300 rounds of pumping exercises.

Eleazar on Tuesday was careful to remind law enforcers of the rules of engagement and other operational procedures of the PNP, especially that thousands of policemen have been deployed to enforce the quarantine rules.

"The incident in Manila has nothing to do with the implementation of the curfew but just the same, we remind our personnel to always observe our protocols especially in dealing with civilians, particularly in the enforcement of the ECQ in Metro Manila and other areas," said Eleazar.

“In the enforcement of minimum public health safety standards and ECQ rules in Metro Manila, we always remind our law enforcers to observe maximum tolerance on quarantine violators. Accosting violators should not lead to the use of force,” he added.

Though the PNP takes action in cases of high-profile killings perpetrated by cops, it continues to drag its feet in the alleged murders of activists and other lower-profile cases involving police.

Police leadership then points to past cases as proof that lapses on the part of cops are "promptly addressed," but continue to deny what critics say is a culture of violence and impunity within the police organization.

In most cases of police abuse, Eleazar routinely appeals to the public to let the investigations take their course before making conclusions on the incidents.