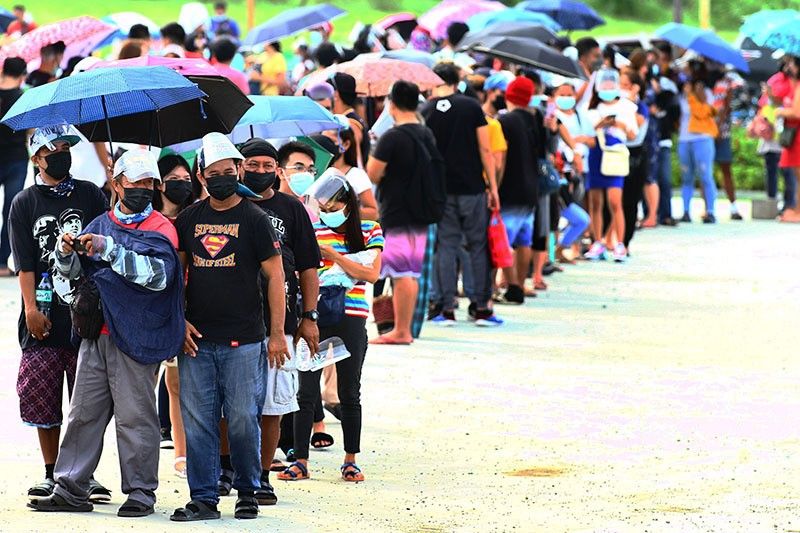 MANILA, Philippines — Social media posts spreading rumors on vaccination and distribution of cash aid were done by "nuisance" criminals, according to initial findings by the National Bureau of Investigation.

Metropolitan Manila Development Authority chair Benhur Abalos last week asked the NBI to look into the spread of rumors that those who have yet to be vaccinated will not receive cash aid or be allowed to leave their homes during lockdown. The false information prompted thousands to flock to vaccination sites a day before Metro Manila reverted to Enhanced Community Quarantine.

In an interview with ONE News’ Agenda on Tuesday, NBI Cybercrime Division chief Vic Lorenzo explained that in investigating cybercrime, investigators also look into the motives for them. In this specific probe, he noted that the rumors affected different cities.

(What we are seeing is it’s not politically-motivated because it has no bearing. They are spreading it to different jurisdictions, if you are not vaccinated in Quezon City, Makati, Las Piñas, so there is no pattern. So what we are looking at is these are nuisance, nuisance cybercriminals.)

(In our view, this is not a concerted effort of an organized group but either a few individuals or just one person.)

The cybercrime division chief said these individuals may have had no other things to do and just wanted to see what would happen, out of curiosity.

A day before millions in the National Capital Region went into a lockdown, thousands flocked to vaccination sites in Manila, Quezon City and Las Piñas. Reports said those who lined up heard of rumors that they will not be given cash aid or they will be barred from leaving their homes during the ECQ period if they are unvaccinated.

In a command conference streamed live on Thursday, Manila Mayor Isko Moreno said they suspect “agitators” sent by persons with political motives as those who initiated the spread of rumors.

“Masakit man isipin, talagang ganyan ang pulitika (It is a painful thought but that is how politics is),” he added.

Apart from the social media rumors, critics of the government — including Vice President Leni Robredo — have pointed out that government statements also contributed to the overcrowding.

When asked by reporters who he thinks may be behind false information on vaccination, Moreno posted a video clip of President Rodrigo Duterte in a taped address saying those who are not vaccinated will be escorted back to their homes. The Palace has rejected the assertion.

The brewing word war between Duterte and Moreno continued until Monday night when the president said he is withholding a certain city's "power to distribute" financial assistance because of “disorder” at its vaccination sites.

Duterte went on to deride the unnamed mayor’s past acting career.

While he was not named directly, Manila City Mayor Isko Moreno is the only Metro Manila mayor who has publicly acknowledged taking suggestive photos as part of his past acting career which Duterte alluded to.

On Tuesday morning, presidential spokesperson Harry Roque admitted that he is unsure whether the president’s threat to withdraw authorization for aid distribution will be implemented.

Roque instead deferred to the Department of the Interior and Local Government and Social Welfare and Development on the matter. "There must be talks ongoing right now but I am not privy to the talks," he added.

The DILG previously told Philstar.com that it will leave clarifying the president's remarks to Roque. — Kristine Joy Patag with reports from Bella Perez-Rubio