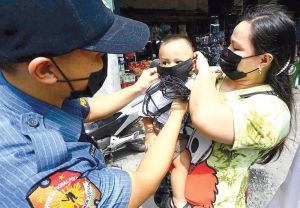 MUST WEAR MASK A policeman helps put a mask on a child in Divisoria, Manila on Thursday, June 16, 2022. The police is helping the government implement the mask mandate in light of the directive of the governor of Cebu making wearing masks outdoors optional. PHOTO MIKE ALQUINTO

INDEPENDENT Covid-19 tracker OCTA Research has classified the National Capital Region (NCR or Metro Manila) as at moderate risk for Covid infection, even as the region maintained its Alert Level 1 status until the end of the month.

In an interview on CNN Philippines on Tuesday, OCTA Research senior fellow Dr. Guido David said the group raised Metro Manila's risk level to moderate based on the rising average daily attack rate of 0.99, the reproduction rate of 1.56 and the test positivity rate of 3.3 percent.

But in a statement, the Department of Health (DoH) reiterated that the NCR remained under low risk, noting that while the region showed a positive two-week growth rate, its average daily attack rate is still below the required six cases per 100,000 population.

David said OCTA's metrics are different from that being used by the DoH. He said the group gets its metrics from the Covid Act Now nonprofit group led by the Harvard Global Health Institute, Stanford Clinical Excellence and Research Center and Georgetown University Medical Center.

He said that despite the slight rise in cases, Metro Manila's hospital utilization rate remained at low risk, with 23 percent of Covid-19 dedicated beds in use.

David said he agreed with the government's Covid task force's decision to keep NCR under Alert Level 1, but called on the government to re-evaluate the alert level status once the cases go up.

“We are not projecting a big surge that happened in January or last year, we are just projecting a few hundred cases at the peak of the surge in Metro Manila which will not affect the health care system. But if the numbers increase, there should be a room to re-evaluate the alert level status,” he said.

David expects a “surge” of around a “few hundred cases” by the end of June or the first week of July.

“At this stage of the pandemic, infections are expected. Most of them will be asymptomatic, mild or moderate — thanks to vaccination, boosters and health protocols,” the department said.

As long as severe and critical cases remain low, the current alert level stays, it said.

De Grano said half of the Covid admissions are located in the NCR.

In Calabarzon (Cavite, Laguna, Batangas, Rizal and Quezon), there is a 30 to 40 percent uptick in Covid admissions in public hospitals.

De Grano noted that most of the admissions are non-Covid cases such as hypertension, asthma, diabetes, cancer and kidney problems, as well as infectious diseases among the young like influenza and dengue.

He said the group's members are ready for an influx of Covid cases, although they may experience problems due to staff shortage.