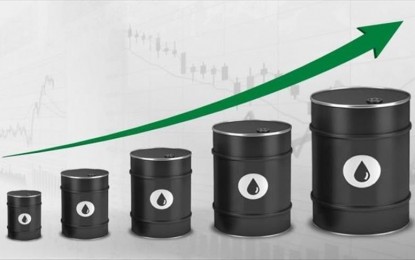 ANKARA – Oil prices jumped significantly on Wednesday after a more than expected cut in OPEC+ production when Saudi Arabia issued a surprise, major unilateral cut of 1 million barrels per day (bpd).
International benchmark Brent crude was trading at USD53.87 per barrel at 0647 GMT for a 0.50-percent rise after closing Tuesday at USD53.60 a barrel.
American benchmark West Texas Intermediate (WTI) was at USD50.02 per barrel at the same time for a 0.18-percent increase after it ended the previous session at USD49.93 a barrel.
The world’s major oil producers, the Organization of Petroleum Exporting Countries (OPEC), and its allies, known as OPEC+, met on Tuesday amid weak oil demand from ongoing lockdowns and strict restrictions in many countries.
However, talks on balancing oil markets struggling with a supply glut and weak demand reached a stalemate as oil-producing countries Russia and Kazakhstan favored higher output levels.
The meeting ended with a surprise announcement from self-proclaimed “guardian of the industry” Saudi Arabia, which said it would voluntarily reduce its production in February and March by 1 million bpd.
The group announced that Russia and Kazakhstan will collectively increase their output by 75,000 bpd while the rest of the group will hold output steady.
In line with the decision taken at the December meeting, OPEC+ is currently cutting its output by 7.2 million bpd in January.
After Saudi Arabia’s voluntary reduction, the group’s production cut will be 8.125 million bpd in February and 8.05 million bpd in March, which also means OPEC+ will reduce its output in February by 925,000 bpd and 850,000 bpd in March relative to output rates in January.
Late Tuesday, the American Petroleum Institute (API) announced its estimate of a fall of 1.66 million barrels in US crude oil inventories compared to the market expectation of a 1.5 million-barrel draw.
If crude stocks fall in line with the API’s expectations, this would signal that crude demand is rebounding in the US, the world’s largest oil consumer, to positively support prices. (Anadolu)