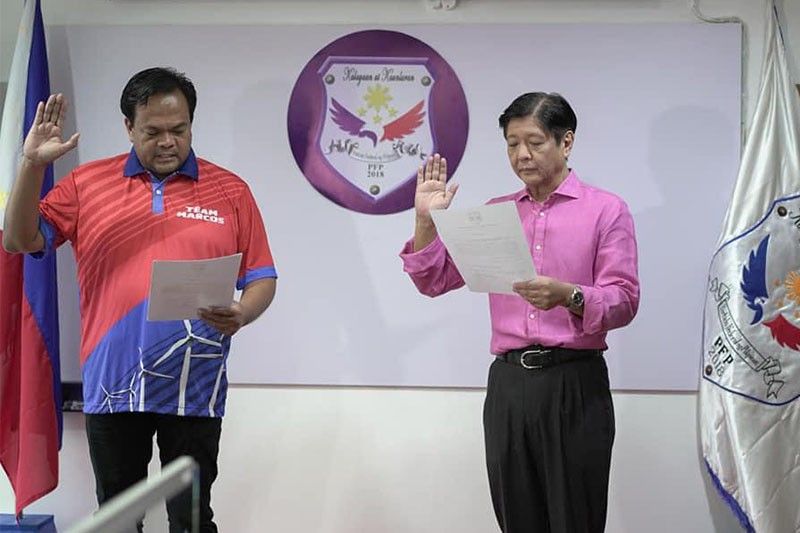 MANILA, Philippines — Abubakar Mangelen, who identified himself as a former chairman of the Partido Federal ng Pilipinas, filed a petition for declaration of nullity of the Certificate of Nomination and Acceptance, and consequent disqualification of presidential aspirant Ferdinand "Bongbong" Marcos Jr.

Marcos is standard-bearer of the PFP after the party named him its chairman in October.

In his petition filed before the Commission on Elections late Thursday, Mangelen argued that the CONA of Marcos is "unauthorized, defective, invalid, and void" , as is the party's endorsement of him as its standard-bearer.

This was because, he claimed, Marcos' CONA issued by the party was attached "sans his knowledge, participation, concurrence, and signature."

"The matter of [endorsement] by some officers of PFP came as a big shock and surprise to petitioner and substantial number of officers and members," the petition reads.

"As a matter of fact, the party officers from Lanao del Norte and other areas who were not consulted nor notified like petitioner of any meeting or convention complained of their replacement as such officers without due process."

Marcos, the son of ousted dictator Ferdinand Marcos, is also facing two other petitions for disqualification filed by civic groups and survivors of his father's bloody Martial Law regime.

Mangelen also accused Marcos of moral turpitude over his tax convictions in 1995.

"The crime for which respondent was convicted involves moral turpitude that carries with it the accessory penalty of perpetual disqualification to hold public office," he wrote.

Earlier filed petitions, including those that sought the cancellation of Marcos’ Certificate of Candidacy, also cited this trial court conviction on his failure to file Income Tax Returns for multiple years.

PFP, in its earlier pleading, said that the failure to file tax returns is “not intrinsically immoral” and a "crime by omission." Marcos was also "not motivated my criminal intent or ill will as Marcos’ taxes were paid," they said.

This comes after PFP Secretary-General Thompson Lantion claimed in a statement issued earlier Thursday that Mangelen was ousted from the party at its last convention in September.

Lantion also pointed at Mangelen's membership in the Mayor Rodrigo Roa Duterte-National Executive Coordinating Committee (MRRD-NECC), which openly called for the establishment of a “revolutionary government” under President Rodrigo Duterte, who eventually distanced himself from the group.

The Philippine National Police at the time directed its Criminal Investigation and Detection Group to investigate the group and "determine if there is any basis to file criminal charges leading to a possible arrest." Lantion claimed the investigation into the "illegal activities" was still ongoing a year later.

Mangelen, who sits as commissioner at the National Commission on Muslim Affairs, said he was unaware of Lantion's claims. The latter in his statement also linked the breakaway faction to former Agrarian Reform Secretary John Castriciones, who is running for senator under PDP-Laban.

In his petition, Mangelen argued that he was the duly elected chairman of the political party as shown in its petition for registration filed before the Comelec.

The PFP was approved as a national political party by the Comelec on November 5, 2018.

Philstar.com sought comment from Police Lt. Col. Mon Sawan, public information officer of the PNP's CIDG. This story will be updated with his response. — with a report from Kristine Joy Patag