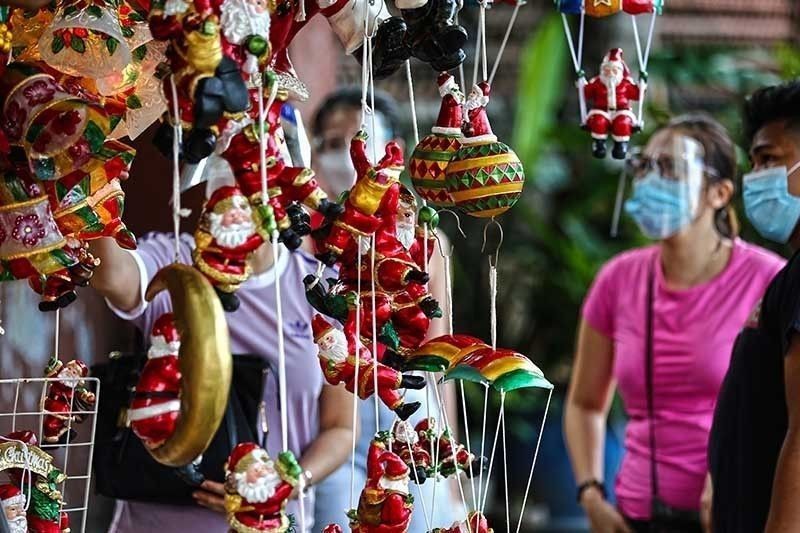 People are seen buying Christmas decorations in this October 3, 2020 photo.

MANILA, Philippines — Christmas Eve in the country will have a generally fair weather condition with no weather disturbances in sight, PAGASA said Wednesday.

The agency in its 5 p.m. forecast said only the extreme northern Luzon would experience cloudy skies and slight rains due to the effects of the northeast monsoon or the Amihan prevailing in the area.

Metro Manila and the rest of Luzon will see fair weather apart from isolated rains by afternoon or night.

Visayas and Mindanao will also experience the same along with chances of better weather condition with Tropical Depression "Vicky" already outside the country.

In the next three days, which includes Christmas Day, fair weather is expected to prevail over NCR, but cloudy skies and rains may be seen by Sunday, December 27.

December 25 for Legazpi City in Albay could also be rainy, due to the effects of the Amihan, with cloudy skies, rains and thunderstorms by Saturday and Sunday.

Cebu and Davao will also see the same weather condition in the next three days of scattered rains and thunderstorms.

PAGASA has said that it is expecting one to two more storms this December, with the first already being Vicky which left eight people dead and over P200 million in cost of damage.

The Philippines has seen 22 storms this 2020, with the onset of the La Niña being declared in October that is seen to persist until March 2021.

Gale warning is also raised in the following areas, as the weather bureau warns that wave height could reach between 2.8 to 5.5 meters: