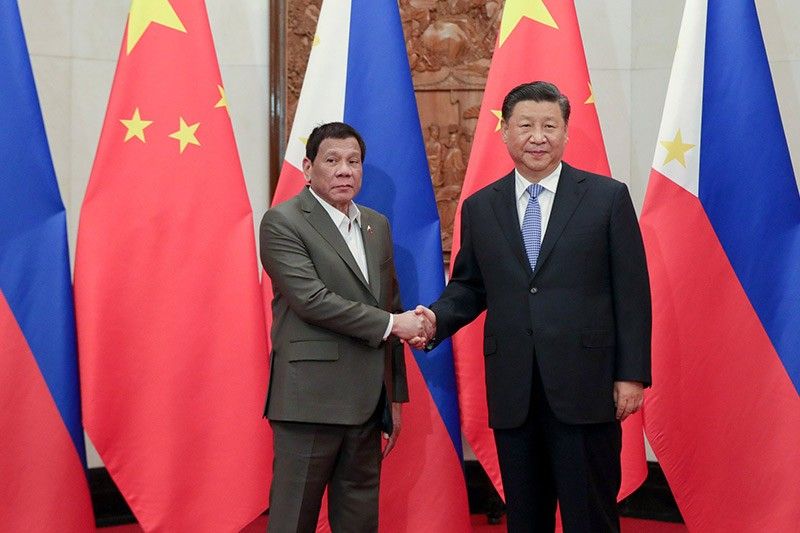 MANILA, Philippines — Malacañang Friday denied that President Rodrigo Duterte has entered into a fishing agreement with Chinese President Xi Jinping, contradicting a 2019 statement of a previous Palace spokesman who claimed that the deal was "informal" but "binding."

Retired Supreme Court Senior Associate Justice Antonio Carpio, a vocal critic of Duterte's handling of the West Philippine Sea row, has claimed that the Chinese government is not taking the Philippines' diplomatic protests seriously because of its fishing agreement with Duterte.

The Philippines recently filed diplomatic protests against the presence of Chinese ships in the Julian Felipe Reef, an area within its exclusive economic zone and continental shelf, over which it enjoys the exclusive right to exploit or conserve any resources.

"There is no truth to the speculation of a purported 'verbal fishing agreement' between President Rodrigo Roa Duterte and President Xi Jin Ping, nor that Chinese vessels were encouraged to stay in West Philippine Sea despite the diplomatic protests and strongly-worded statements of Philippine government officials," presidential spokesman Harry Roque said in a statement.

"This is without basis and is quite simply, conjecture," he added.

Roque's statement contradicted an earlier remark by his predecessor, former presidential spokesman Salvador Panelo, who claimed that the verbal fishing agreement between Duterte and Xi is binding because there is mutual consent from the two parties.

Roque has not responded to questions seeking to clarify the apparent contradiction between his statement and that of Panelo.

Roque said under Philippine laws, a fishing agreement can only be done through a treaty. He cited Article 2 (1) (a) of the Vienna Convention on the Law on Treaties, which states that a treaty is an international agreement concluded between states in written form.

"Clearly, a treaty must be in writing. No such treaty or agreement exists between the Philippines and China," the Palace spokesman said.

"The president does not condone unlawful commercial fishing by any state on Philippine waters," he added.

Roque, nevertheless, said the president recognizes that subsistence or non-commercial fishing may be allowed as a recognition of the traditional fishing rights pointed out by the arbitral tribunal itself in its award on jurisdiction in the case between the Philippines and China.

"Let us therefore stop making malicious speculations and false claims made to pointlessly inflame the situation. We ask everyone to just focus our time and effort on productive activities that will enable us to help one another at this time of pandemic," Roque said.

During his fourth state of the nation address on July 22, 2019, Duterte said he had spoken to Xi about the plight of Filipino fishermen in the West Philippine Sea.

"Anong sabihin ko sa kanila? Kaya sinabi ko (What will I tell them? said), "Let us do this mutually." Of course, when Xi says, "I will fish," who can prevent him? And sabi ko naman (I told him), "We will fish because we claim it," Duterte said.

"And sabi ko (I said), 'Please allow because…' Before that, they were driving away our fishermen. 'Di ba inaabog nila? Kaya sabi ko (They are driving the fishermen away, right? so I said), 'Do not drive them away because the Filipinos are of the belief that they are also – they claim it," he added.

"Now, if you deprive – deprive the Filipinos of – there, magkagulo talaga 'yan (there will be chaos). And it could lead to,,,not really war, and I said, 'we have to…' Kaya ang sabi ko (So I said)… When I said, 'I allowed,' that was on the premise that I own the property. Pero hindi tayo (But we are not) in control of the property. Ayan magsabi sila (Then they said), "Of course, I will allow you." Kaya pinabalik (That's why they were allowed to return)." It’s inauguration week, and focus will be on the Philippines’ incoming 17th President Ferdinand “Bongbong” …