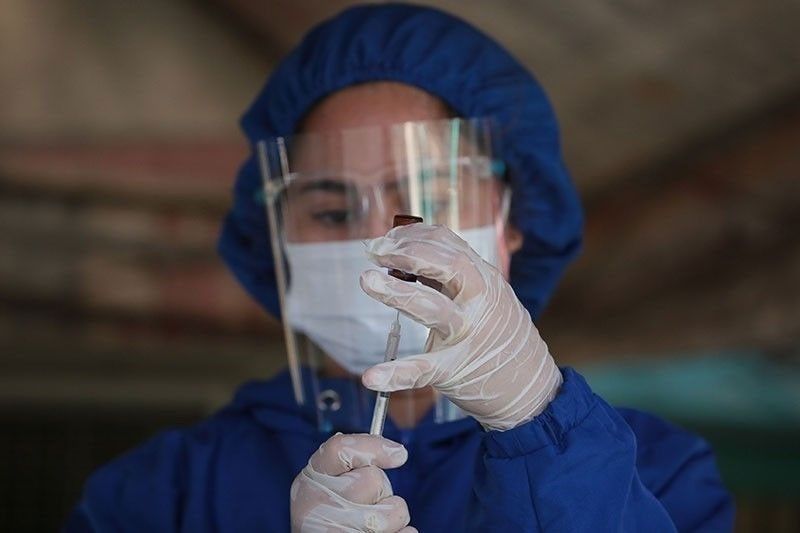 MANILA, Philippines — Malacañang on Thursday expressed support for the Department of Health's policy not to reveal in advance the brand of COVID-19 shots to be administered in vaccination sites, saying all jabs approved by the government are safe and effective.

Presidential spokesman Harry Roque said President Rodrigo Duterte himself issued the directive after seeing the lack of physical distancing in areas where vaccines developed by American firm Pfizer were administered.

"All vaccines are equal. They were studied thoroughly and all of them are safe and effective. That's why the best vaccine is the one being injected into your arm," Roque said at a press briefing.

Some sectors are against the DOH's "brand agnostic" policy, saying people who will avail of the vaccine have the right to know the type of jabs they would receive. There are also concerns that the withholding of information about the vaccines would worsen the vaccine hesitancy in the country.

"Informed consent is about informing people that the vaccines we are administering underwent processes. They did not only undergo processes here in the Philippines. They also underwent process abroad and almost all the brands we are using have secured a WHO (World Health Organization) emergency use list," the Palace spokesman said.

Roque insisted that there is no policy allowing people to choose the brand of vaccines they would receive.

"This is what the president said: We cannot choose the brand of vaccine. The safest vaccine is the vaccine that is injected into your arm, regardless of the brand," Roque said.

"We had to get seven brands because it is hard to secure only one or two brands. We did this to ensure that all Filipinos will be vaccinated and we will have vaccine protection and what we call herd immunity," he added.

'Pfizer jabs to be given to the poor'

Roque said Duterte wants Pfizer vaccines to be given to the indigent population as required by the World Health Organization-led COVAX facility.

"The president ordered the giving of Pfizer (jabs) to the poor or to the indigent population because that is the policy of COVAX. The President added that the Pfizer vaccines should be distributed not in malls but in vaccination sites in barangays where there is low take up of vaccines," the Palace spokesman said.

"This is in line with the earlier directive of the President to vaccinate Filipinos for free. No one will be left behind and we are not safe until everybody is safe. He has ordered the vaccine czar, Secretary Carlito Galvez, to ensure that this is implemented," he added.

Roque explained that the COVID-19 vaccines acquired through COVAX cannot be given to economic frontliners or those who belong to the A4 priority group.

"For COVAX, there is no A4. It's A1 (health workers), A2 (senior citizens), A3 (people with health risks or comorbidities) and A5 (indigent population). For the A4, we will give them the vaccines we purchased," he said.

Roque said the vaccination of economic frontliners and indigents may be done simultaneously.

"The consensus really and the directive of the President is to widen the scope of people who can be vaccinated because many want to avail of vaccines already but it's not yet their turn," he added.

Roque said the government seeks to achieve "mass vaccination," which involves the inoculation of 70 percent of the population of the National Capital Region (NCR) plus by November 27. The NCR Plus is composed of Metro Manila, Bulacan, Cavite, Laguna and Rizal and contributes about half of the Philippines' economic output.

As of May 18, more than 2.5 million Filipinos have received at least one vaccine dose while 786.528 have been given their second dose. A total of 4,253,450 COVID-19 vaccine doses have been delivered. The government expects the number of delivered vaccine doses to reach 7.75 million this month.

The government aims to inoculate 70 million people by the end of the year.