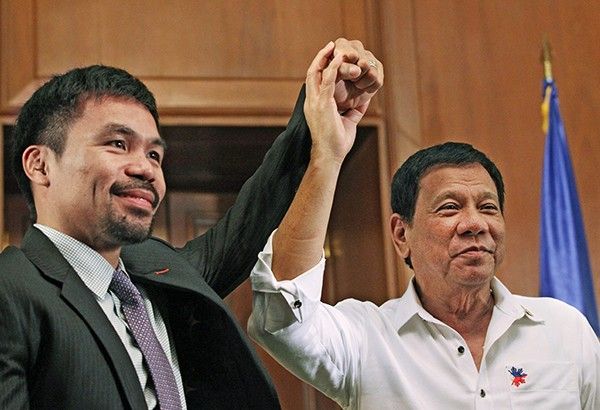 Pacquiao, who is gunning for the presidency next year, formally ended his decorated boxing career last Wednesday, a move he described as "the hardest decision" he has ever made.

He used to be a close administration ally but his relationship with President Rodrigo Duterte was strained after he criticized the alleged widespread corruption in government. Pacquiao's remark has triggered a word war with Duterte, who lashed back at the 42-year-old senator by bringing up his tax evasion case and calling him "punch drunk."

The Duterte administration, however, temporarily set aside politics Thursday when it recognized the eight-division world champion's achievements in the boxing ring.

"We thank Sen. Pacquiao because he has honored the country with his many successes. We share in the joys of his triumphs as well as his defeats," presidential spokesman Harry Roque said at a press briefing.

"We are proud that he is a Filipino and he has made us very proud to be Filipinos," he added.

Pacquiao posted a win-loss draw record of 62-8-2, with 39 knockouts in his 26-year boxing career.

Share
Previous SC still on 15% on-site capacity; no personal filing in October
Next Enbridge says Line 3 ‘substantially complete,’ will be in service Oct. 1